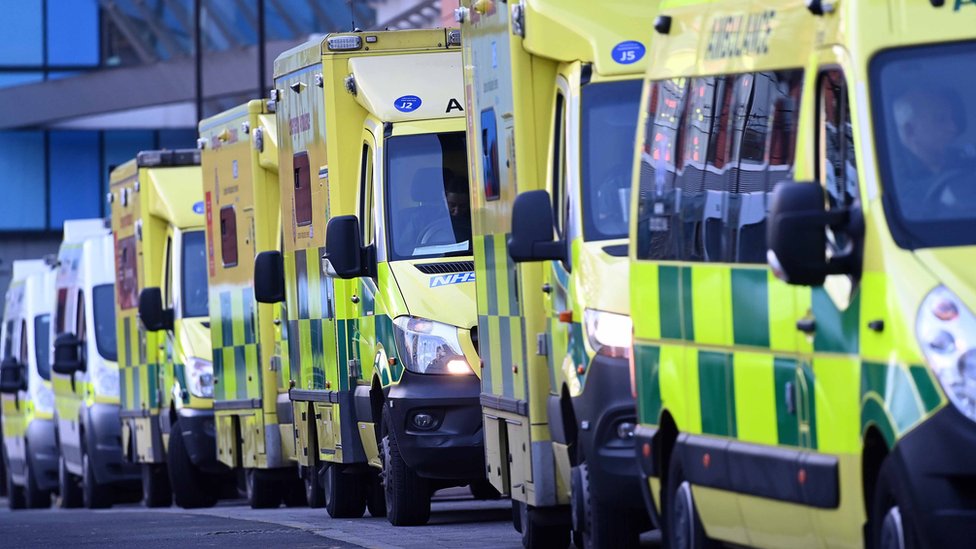 By Dr Faye Kirkland and Noel TitheradgeBBC NewsPublishedduration3 hours agoThe number of hours ambulances spent waiting to offload patients in parts of England is “off the scale”, the Royal College of Emergency Medicine says.Data leaked to BBC News shows ambulance waiting times at hospitals in the South East rose by 36% in December compared to…

The number of hours ambulances spent waiting to offload patients in parts of England is “off the scale”, the Royal College of Emergency Medicine says.

Data leaked to BBC News shows ambulance waiting times at hospitals in the South East rose by 36% in December compared to the same month in 2019.

People are also having to wait longer for ambulances to arrive when called.

Ambulance services say it is taking longer to hand over patients but they are doing all they can to meet demand.

It comes as the NHS faces unprecedented pressure because of the Covid pandemic.

A paramedic working in London told BBC News he had encountered patients left waiting up to 12 hours for an ambulance in the last week.

One patient in London with a broken leg had to wait outside at night for six hours before an ambulance arrived to collect him, he said.

On another occasion, paramedics were called to attend to a young man with Covid-19 whose oxygen levels were “so low”. He was given oxygen when they arrived – but that was eight hours after the ambulance was called.

Incidents such as these are “dangerous” and the service is “on its knees”, the paramedic added.

The figures also show that at one point on Monday this week more than 700 patients were left waiting for an ambulance to arrive in London when none was available.

On Tuesday, a patient with what is classed as a Category One emergency, meaning their condition was life threatening, waited more than 70 minutes for an ambulance.

Callouts for such seriously unwell patients should take seven minutes on average.

Different statistics obtained by BBC News highlight the number of hours spent waiting to offload patients at hospitals half an hour after ambulances arrived at hospitals in the South East.

Kent saw the greatest rise in this period. One of its hospitals, Medway Maritime Hospital, saw a doubling in ambulance waiting times.

These figures are “off the scale”, according to Royal College of Emergency Medicine Vice President Adrian Boyle.

“It is not because more ambulances are being called, it’s because the amount of time they’re spending outside a hospital has increased,” he said.

Dr Boyle says ambulances left queuing outside hospitals meant crews were not available to respond to other emergencies.

He says services are facing a “crisis” unlike any other he has seen.

“People may feel they have a winter crisis every year but this is a different order of magnitude”, he added.

“This is the worst winter crisis I’ve been through in my 25 years of practising as a doctor.”

Ambulance services say they are are doing everything they can to meet the demand.

A London Ambulance Service Trust spokesperson said: “We are continuing to prioritise the most seriously ill and injured patients, and our team of trained clinicians in our control rooms are working hard to monitor and maintain contact with many other patients as needed while they are waiting for ambulance crews to arrive.”

A South East Coast Ambulance Service Trust spokesperson said: “We are doing everything we can to increase the number of staff available to meet this demand, including increasing overtime, to ensure crews are as available as possible to respond to patients in the community.”

Have you been affected by the issues raised in this story. You can share your experience by emailing haveyoursay@bbc.co.uk.