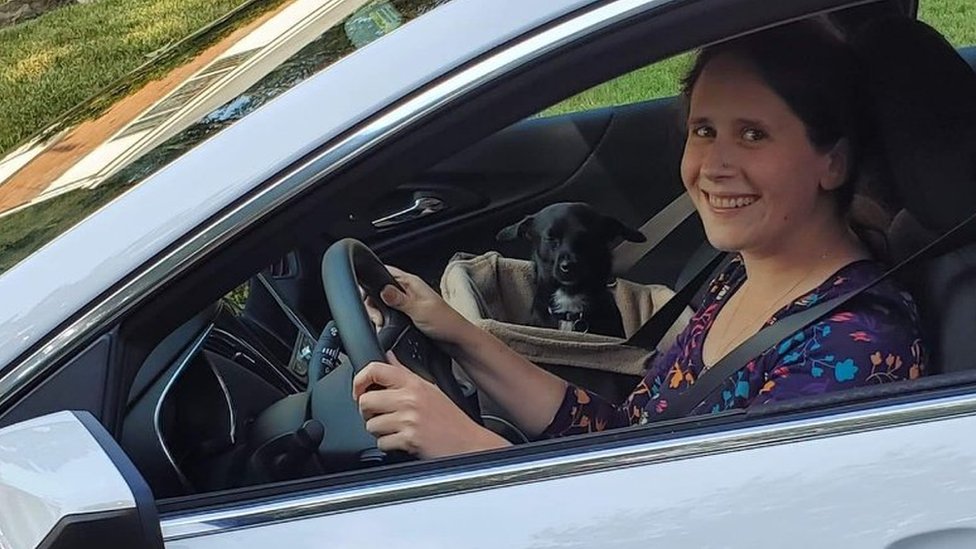 By Natalie ShermanBusiness reporter, New YorkPublishedduration4 hours agoimage copyrightAndrea Wilhelmimage captionAndrea Wilhelm left New York and is now road-tripping across the US in search of potential new hometownsAndrea Wilhelm gave up her New York City apartment in August – and she’s not sure whether she will ever return. The 30-year-old software designer loved living in…

Andrea Wilhelm gave up her New York City apartment in August – and she’s not sure whether she will ever return.

The 30-year-old software designer loved living in New York – attending Broadway shows, frequenting dog parks, and the serendipitous walks of daily life. For nearly five years, she willingly paid the city’s premium rents and taxes, while commuting to work in another state.

But the pandemic wore her down.

“I was like, ‘the city’s going to come back. By July, it’s going to be okay. But it just kept not being ok,” she says.

“I wasn’t planning on leaving at all,” she adds. “It was a complete switch.”

Since March, property firms and moving companies have reported a rush of demand from people leaving New York, many of them young families, as the pandemic drives demand for bigger homes and more outdoor space, while making relocation easier by expanding remote work.

And so far, the surge hasn’t shown signs of slowing, says Liz Nunan, president of property firm Houlihan Lawrence, which handles home sales in suburbs around New York City, and reported its best year on record in 2020.

Last year, longer distance relocations from New York City helped push New York the state to the biggest population decline of any in the US, putting it on track for its first population fall of any decade since the 1970s.

The signs of outflow have spawned a small universe of articles debating whether New York City is dead or dying, and what – if anything – should be done to help it recover.

And as the US confronts an economic crisis likely to outlast the pandemic that precipitated it, such concerns are not unique to the US’s largest city.

“This is a difficult time for everybody,” says William Frey, a demographer at the Brookings Institution think tank. “The real issue is, ‘can these cities hold their economic vitality?’.”

In New York, the pandemic has closed theatres, emptied offices, halted tourism, and turned shopping and dining into hazards to be undertaken at your own risk, gutting industries that employed a fifth of the city’s workforce.

As many as a third of the city’s small businesses may not survive the pandemic, according to estimates by local business group, the Partnership for New York City. Most companies in the city’s downtown do not expect staff to ever return to the office in full force. Some firms have already left.

The situation has driven the city’s jobless rate to more than 12% – almost double the national average – swollen the ranks of the homeless, and helped spur the departure of more than 300,000 people like Andrea, further straining public finances.

In response, New York leaders have raised the prospect of increasing taxes and cutting services like transportation, garbage collection and park maintenance, while begging for emergency aid from Washington to resolve financial woes – pleas that so far have fallen on deaf ears.

Michael Hendrix, director of state and local policy at the free market Manhattan Institute think tank, worries the potential cuts will further accelerate the outflow, hurting the very amenities that make city life attractive and leaving a poorer city for those who remain.

“It’s not really so much the pandemic that is the greatest challenge to New York City,” he says. “It’s really the second order consequences that have dealt a blow to the city’s recovery and its citizens.”

“New York is not dead, but it is on life support,” he says. “Whether its recovery is measured in months, or years, or decades is primarily determined by the degree of leadership that we see in the city. And I think that’s why we should be so concerned.”

In some ways, such worries are uniquely American, reflecting the safety woes and weak educational systems that set so many US cities apart from counterparts in Europe and Canada, says Richard Florida, professor at the University of Toronto. He predicts that coronavirus outflow from cities outside the US will be less dramatic and more temporary.

In the US, however, the urban revival of the early 2000s had shown signs of fading even before the pandemic, as immigration waned and moves to the suburbs accelerated.

In New York, the population has been falling since 2016.

The expansion of remote work caused by the pandemic means the city is now competing with even more places for businesses and families – trends that are unlikely to fully reverse even after life returns to normal, Prof Florida says.

“Talented people have choice now with remote work. Those choices will be made carefully,” he says. “The big winners are places with a lot of amenity, and the premium for amenity will grow. That means cities with wonderful coast lines or rural areas near mountains. Places like Miami Beach, or Bozeman, Montana, or Aspen, Colorado, or the Hudson Valley of New York.”

Andrea, who initially decamped to her mother’s home in Pittsburgh, Pennsylvania, says she hasn’t entirely written off New York. But for now, she’s planning a cross-country road trip, working remotely while scoping out new cities to potentially call home.

“I’m going to hop in the car… and drive around the country, and see if anything feels like a fit,” she says. “If it doesn’t, then I’ll see where the world is in September.”

Kevin Pearsall and his wife left New York City in March for Atlanta, Georgia. After years of focusing on their careers in advertising, the 35-year-old says they wanted a hometown where they didn’t feel like they were struggling to make it, even though they were making six-figure salaries.

They both landed jobs as remote workers for New York firms – another sign that convinced them the city was no longer the only place they could combine professional opportunity and social life.

“All of the great things about New York, speakeasies, beer gardens… that’s not really as unique as it used to be,” he says.

“We were already in motion, thinking about leaving,” he says. The pandemic “just accelerated” the move.

New York leaders have expressed confidence that the city will remain a draw, noting that outflow of a few hundred thousand hardly makes a dent in a city of more than eight million.

“I’m not going to beg people to stay,” Mayor Bill de Blasio said last year. “I know this city will rebound. I know it. And I know others will come. They have for generations.”

“We can’t overrate this moment in history,” he added. “It is a passing moment. There will be a vaccine. And then all the strengths of New York City will reassert again.”

How it will shake out in the long term remains a question.

The neighbourhoods that emptied during lockdowns last year were the city’s wealthiest, but a Manhattan Institute survey this summer found that two in five New Yorkers would leave the city if they could live anywhere they wanted, with dissatisfaction highest among those with lower incomes.

Mr Hendrix says it is tempting to hope a more affordable city will emerge if the rich depart, but he worries such an exodus will generate still more challenges, given how dependent the city is on high earners for tax revenue.

“It doesn’t take a majority leaving the city or a majority changing their lifestyle to make a big difference,” he says.

Prof Florida says the biggest cities, like New York and San Francisco, are likely to remain a draw for young people, who should benefit if rents continue to fall.

But he warns that such declines were short-lived after previous crises. And elsewhere in America, he expects downtown business districts – even some of those in the growing “Sunbelt” region – to face major challenges.

“The central business districts – those places which packed and stacked knowledge workers in the vertical towers – they are in for a real reckoning,” he says.