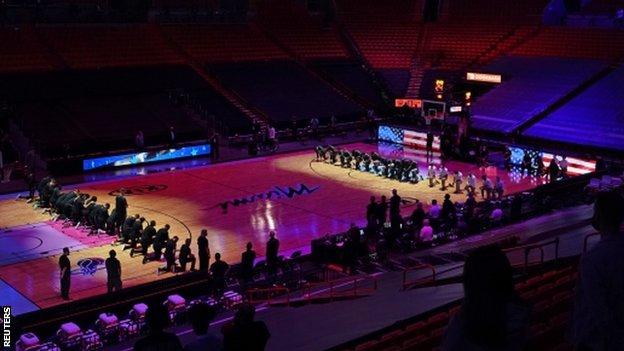 Miami and Boston players knelt for the national anthem before the Celtics’ win on WednesdayThe Miami Heat and the Boston Celtics played “with a heavy heart” on Wednesday after seeing the US Capitol stormed by hundreds of supporters of outgoing president Donald Trump.The incident in August caused the NBA to postpone games in protest. A…

The Miami Heat and the Boston Celtics played “with a heavy heart” on Wednesday after seeing the US Capitol stormed by hundreds of supporters of outgoing president Donald Trump.

The incident in August caused the NBA to postpone games in protest.

A joint statement by Boston and Miami players read: “2021 is a new year, but some things have not changed.”

It went on: “We play tonight’s game with a heavy heart after yesterday’s decision in Kenosha, and knowing that protesters in our nation’s capital are treated differently by political leaders depending on what side of certain issues they are on.

“The drastic difference between the way protesters this past spring and summer were treated and the encouragement given to today’s protesters who acted illegally just shows how much more work we have to do.”

Trump had urged demonstrators to march on the Capitol in a bid to overturn the election result and the ensuing riot left four people dead.

Many spoke at Wednesday’s NBA games about the contrast between the suppression of Black Lives Matter protests last year and the reaction of authorities in Washington DC on Wednesday.

Virtually all Boston and Miami players knelt as the national anthem was played before the Celtics’ 107-105 win and said they would play to try “to bring joy into people’s lives”.

“But we must not forget the injustices in our society, and we will continue to use our voices and our platform to highlight these issues and do everything we can to work for a more equal and just America.”

Boston coach Brad Stevens said: “We elected a president who operated in a win-at-all-costs attitude and I always thought that if you operate like that it’s going to be a pretty unfulfilling ending, and in this situation, a disgraceful ending.”

Philadelphia 76ers coach Doc Rivers, whose team lead the Eastern Conference after beating the Washington Wizards 141-136, said: “It’s pretty disturbing and sad. I keep hearing, ‘This is an attack on democracy.’ It’s not. Democracy will prevail. It always does.

“Can you imagine today, if those were all black people storming the Capitol, and what would have happened? That, to me, is a picture that’s worth a thousand words for all of us to see.”

Atlanta Hawks coach Lloyd Pierce, whose team were beaten 102-94 by the Charlotte Hornets, said: “We all understand that there would be guns ablaze and fires ablaze right now if there were black people protesting.”

It is the first time New York has overcome 15-point deficits in back-to-back wins since November 2017 and they now have five wins and three losses in the Eastern Conference, along with the Milwaukee Bucks.

Two-time NBA Most Valuable Player Giannis Antetokounmpo had 25 points and eight rebounds to lead the Bucks to a 130-115 win over the Detroit Pistons.

The Orlando Magic beat the Cleveland Cavaliers 105-94 so sit second on six wins and two losses with the Indiana Pacers, who beat the Houston Rockets 114-107 thanks to a career-high 35 points from Malcolm Brogdon.

The Phoenix Suns are top of the Western Conference after beating the Toronto Raptors 123-115 for their sixth win from eight games, while the Los Angeles Clippers are third after a 108-101 win over the Golden State Warriors.

George Hill made two free throws with 12.1 seconds remaining to lift the Oklahoma City Thunder to a 111-110 win at the New Orleans Pelicans, and Richaun Holmes scored 24 points as the Sacramento Kings ended a three-game losing streak by beating the Chicago Bulls 128-124.