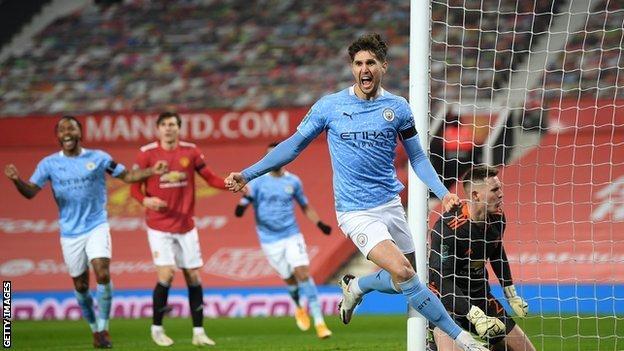 John Stones scored his first goal since the World Cup in 2018Manchester City deservedly beat Manchester United to reach the Carabao Cup final and will now face Tottenham at Wembley as they look to win the competition for a fourth straight year.Second-half goals from John Stones and Fernandinho secured their progress as City cut loose…

Manchester City deservedly beat Manchester United to reach the Carabao Cup final and will now face Tottenham at Wembley as they look to win the competition for a fourth straight year.

Second-half goals from John Stones and Fernandinho secured their progress as City cut loose after a first period in which both sides had goals disallowed.

Pep Guardiola’s side looked the more likely scorers afterwards, despite United’s increasing desperation, and when Anthony Martial and Aaron Wan-Bissaka could only combine to clear a corner to the edge of their own box, Fernandinho drilled a first-time volley into the bottom corner from 20 yards.

City will equal Liverpool’s record of winning the League Cup four times in a row if they beat Jose Mourinho’s Spurs on Sunday, 25 April.

It will be a first final meeting between Guardiola and Mourinho since 2011, when the current Spurs boss’ Real Madrid side denied Barcelona the treble by winning the Copa del Rey.

It was a disappointing night for United boss Ole Gunnar Solskjaer, whose side have now lost four cup semi-finals in the past 12 months and failed to heed their manager’s call to win some silverware as tangible proof of their recent improvement.

Fitting tribute to a City legend

In a sense, it was fitting these two old rivals should meet the day after the death of Colin Bell.

The brilliant former England midfielder was part of Manchester City’s ‘Holy Trinity’ in an era where United also had one.

Bell won the League Cup in 1970, when he scored in a semi-final win against United and, sadly, his career was wrecked by a tackle in a derby.

There are not many box-to-box players like Bell now but, even though he was again deployed in a false nine role, Kevin de Bruyne is a worthy heir to a man City supporters called “the King”.

The Belgian’s shot, which thudded off the post at such pace it bounced straight out to Wan-Bissaka, who was fully 12 yards away from his goal, was majestic in its brutality.

It was the high point of a first half City dominated in terms of possession, though they did have two goals ruled out because of offside compared with their hosts’ one.

Stones was an unlikely candidate to break the deadlock given it was over three years since the centre-back’s last goal, but it underlined the resurgence in his game after spending almost 18 months on the periphery of Guardiola’s squad.

Joao Cancelo and Riyad Mahrez both went close to doubling City’s lead before Fernandinho did, although even before that the visitors seemed to have the tie in their own form of lockdown.

For United, this was another disappointing semi-final defeat – a fourth in the past year for Solskjaer after also losing a two-legged tie to City in last season’s EFL Cup, going down to Chelsea in the 2019-20 FA Cup and also being beaten by Sevilla in the Europa League last four.

That will be too many for the Norwegian’s liking. Sir Alex Ferguson only lost six in his entire 26 years as United boss.

The hosts were probably reasonably satisfied with the first half – although City had the majority of the ball, United had more shots.

Their problem was that, other than an early Bruno Fernandes effort from Scott McTominay’s reverse pass which brought a full length save from Zach Steffen, they did not threaten the City goal. And they could not cope after the break when the visitors turned the screw.

Unusually, Fernandes struggled to have an impact and Paul Pogba failed to step up from support role to main man.

While United’s nine-man bench was stronger, they badly missed the big game experience of striker Edinson Cavani, who is serving a three-game ban.

If there is a consolation, it comes in knowing victory at Burnley on Tuesday will take them three points clear at the top of the Premier League.

But Solskjaer knows the quest for that honour is not at the halfway stage – and until a prize is won, questions about his suitability for the biggest of jobs will continue to be asked.

The best of the stats

‘We dedicate the victory to Colin Bell’ – what the managers said

Manchester City boss Guardiola said: “Today it was remarkable what we achieved, but we dedicate the victory to Colin Bell and his family and Manchester City fans that miss him a lot.

“We don’t have as many trophies in the cabinet compared with some teams in England and Europe, but Colin Bell creates this feeling – so it is fantastic to go day by day, against rivals United at Old Trafford, and play incredible football, win and go to Wembley again.”

“John Stones came back; he made another outstanding performance. But the most important thing he has been able to do – something he has struggled with the past three or four years – is play four, five, six games in a row. This is so important – for him especially, and for us.

“All the team was incredible.”

Manchester United boss Solskjaer said: “Tonight it was about a lack of quality compared to them. They deserved to win.

“I’m disappointed to concede at two set-plays. We didn’t have the margins with us. After they scored, we had more of the ball but we didn’t create enough.

“Any team would miss Edinson [Cavani]. He could have caused havoc with his movement in the box. We did start to build momentum but we didn’t have the edge to create a goal. We did put them under pressure.

“It is not just about Bruno [Fernandes] – the whole team has to create chances. Manchester City played well and we needed to be spot on. We didn’t have the last pass.”

Both teams are in FA Cup action next. Manchester United’s host Watford on Saturday (20:00 GMT kick off), while Manchester City entertain another Championship side, Birmingham, the following day (13:30).