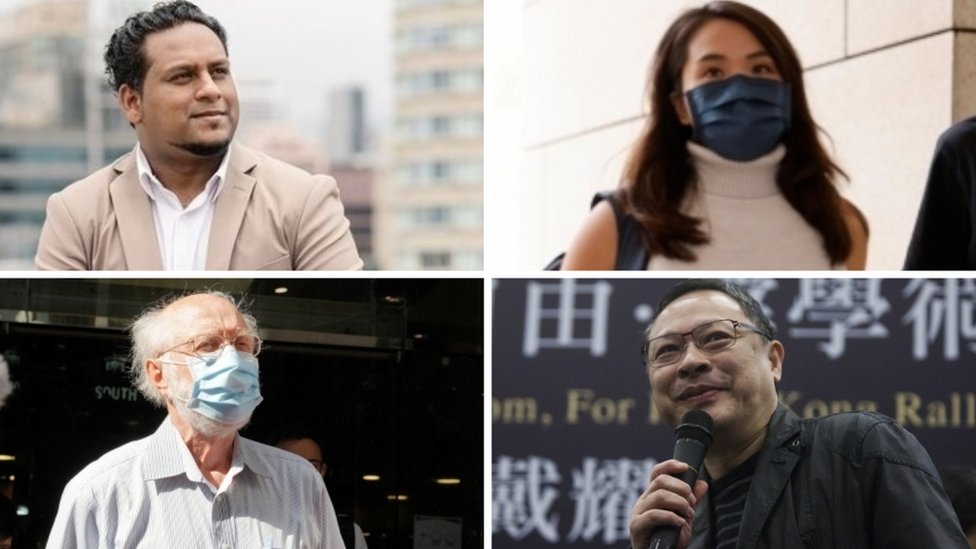 By Preeti JhaBBC News, SingaporePublishedduration2 hours agoimage copyrightEPA, Reuters, Instagramimage captionA social worker, an ex-journalist, an academic and an American lawyer (clockwise from top left) were among the arrestedWhen news of the first arrests began trickling through, Joey Siu got straight onto the phone to her friends in Hong Kong. As they stopped responding, one…

When news of the first arrests began trickling through, Joey Siu got straight onto the phone to her friends in Hong Kong. As they stopped responding, one by one, she realised the crackdown was growing – and fast.

The 21-year-old student activist, who fled to the US two months ago, watched the detentions mount on her screen: a social worker, an academic, a former journalist, an American lawyer.

“I panicked,” said Ms Siu, as the scale of the operation became apparent, partly “because of the fact that I can’t go back and help.”

Less than 18 months ago, she was one of the young protesters whose huge rallies shook Hong Kong and, like several dozen of those activists in recent months, she made the difficult decision to leave in fear of the widening clampdown and a feeling she could do more from overseas.

On Wednesday, 53 people were arrested in Hong Kong, the biggest swoop on pro-democracy activists so far under a draconian security law imposed by Beijing just six months ago.

It confirmed the worst fears of many – including Ms Siu’s – that the legislation would be used to target peaceful activism and stamp out what was left of democracy in the Chinese-ruled city.

It wasn’t the first application of the controversial legislation, which has already targeted prominent figures such as media mogul Jimmy Lai, but it was the largest. A record number were arrested over unofficial primaries last year organised by pro-democracy camps ahead of a local election, which was ultimately postponed by the government.

More than 600,000 Hong Kongers had turned out to vote and decide on candidates, a move that incensed Beijing and drew a warning from Hong Kong’s Chief Executive Carrie Lam that the act could amount to subversion.

It wasn’t therefore a complete shock when the formal accusations materialised on Wednesday, but the wide spectrum of those detained marked a new shift in the policing of dissent.

“It’s not illegal for people to organise and plan together for a winning strategy,” said Victoria Hui, a politics professor at Notre Dame University, saying she was left speechless by the arrests.

But what would be viewed as routine opposition activities elsewhere has been deemed as subversion in Hong Kong, she added.

The city “is rapidly becoming like the rest of China where any kind of organised dissent is not tolerated. Anyone, however minor, even a social worker, is vulnerable,” Dr Hui told the BBC.

“People don’t know when police are going to knock on their door.”

Several detainees have stood out in this latest wave of arrests.

Among those was John Clancey, the first US national detained under the new security law.

Footage of the veteran lawyer, who has been practising in Hong Kong since 1997, was widely shared on social media. In it, Mr Clancey can be seen walking with a crutch as he is slowly led away by police. When a reporter asks if he has anything to say to Hong Kong people he replies, unfazed: “Continue to work for democracy and human rights in Hong Kong.”

Another notable detainee is the city’s first registered ethnic minority social worker. Jeffrey Andrews, a 33-year-old Hong Konger of Indian descent, was one of the few people to speak out against racial injustice in the territory and took part in last year’s primary.

“Arresting peaceful, reasonable and moderate members of the community shows that the national security law has nothing to do with security – instead the government can’t cope with democratic aspirations,” said Mark Daly, a lawyer who has lived in Hong Kong for 25 years and has worked with Mr Clancey on human rights issues.

What next for the democracy movement?

The impact of the new security law is palpable throughout Hong Kong.

The months-long protests that took over swathes of the city in 2019 – and at times turned violent – began to peter out early last year, due to the pandemic. But the legislation introduced in June has had the effect of ending virtually all public campaigning since.

Several people approached for this article – many of whom had been willing to march through the streets openly in 2019 – worried about the consequences of sharing their views.

And few think the crackdown will end here. Some analysts are pointing to the judiciary as a potential next target for authorities.

“I think they’ll continue to search out people,” said Antony Dapiran, a lawyer and writer based in Hong Kong.

“What you’ll have is a city that may be docile on the surface but with a great deal of tension under the surface,” he told the BBC, adding that the democracy movement could even, after some years of relative silence, “bubble up again”.

A strategy to ‘exhaust’ civil society

For Winston Ho – a Hong Konger in his 20s who asked the BBC not to use his real name – the arrests are “a strategy to exhaust the energy and resources” of Hong Kong’s civil society.

Like many of the city’s democracy supporters, he voted in the primaries and was left “infuriated” that democratic demands were being interpreted as a subversion of state power.

“This shows that democratic ballots are bullets in the CCP’s [Chinese Communist Party’s] eyes,” he said.

There is a growing sense of an emboldened Beijing willing to do whatever it takes to stifle any opposition.

“The Chinese leadership has decided that there are very few repercussions for them when they act on Hong Kong,” said Professor Ian Chong from the National University of Singapore.

Whereas earlier there may have been concerns about foreign investors in China that might affect trade in Hong Kong, he explained, perhaps now they “believe they can weather those kind of pressures”.

In this new climate, Mr Ho has watched his friends leave the city and knows several others who are making plans to follow suit.

“It’s sadly a professional hazard” for many, he told the BBC, particularly those like him who work on human rights issues.

For now though, Mr Ho is hoping he doesn’t have to make that choice.