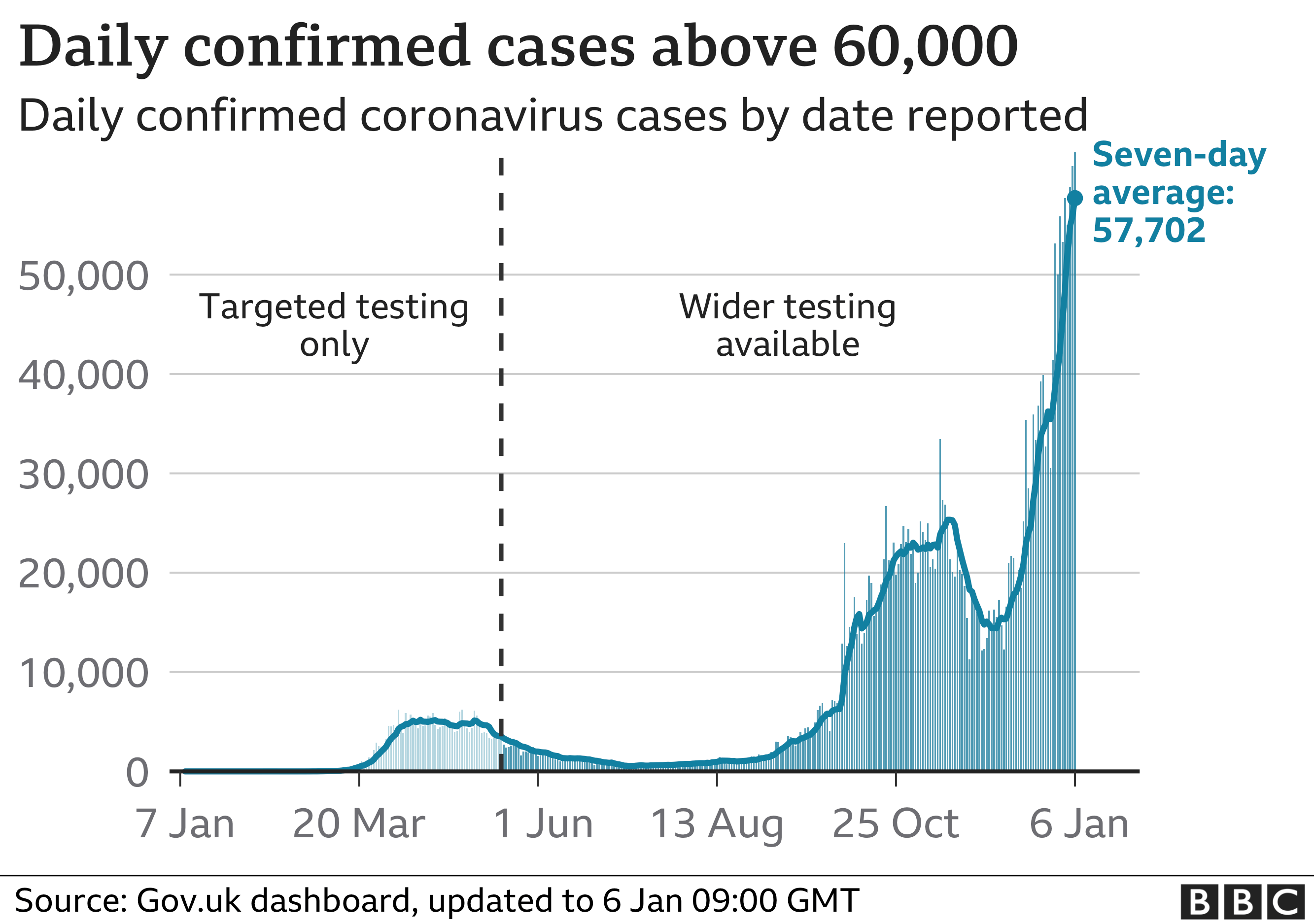 Publishedduration1 hour agoThe UK has reported a further 1,041 people have died with coronavirus, the highest daily death toll since April.It came as 62,322 new cases were recorded, the highest daily rise since mass testing began, and as MPs supported England’s lockdown.Health Secretary Matt Hancock earlier said doctors could be forced to ration treatment without…

The UK has reported a further 1,041 people have died with coronavirus, the highest daily death toll since April.

It came as 62,322 new cases were recorded, the highest daily rise since mass testing began, and as MPs supported England’s lockdown.

There are 30,074 Covid patients in UK hospitals, he said, as an ambulance trust told of severe pressure.

Current patient numbers are 39% higher than the previous peak on 12 April last year, when 21,684 were in hospital.

The number of those who died within 28 days of a positive test in the past week is 37% higher than the previous seven days.

Andrew Hayward, a professor of infectious diseases, said the number of deaths could continue to increase for the next few weeks.

He explained deaths “lag two or three weeks behind the number of cases in the community, and those have been increasing”.

Prof Hayward, who is also a government science adviser, added: “I think the lockdown measures will turn that number of deaths around but it is going to take a little while.”

Mr Hancock told MPs the consequences of inaction could be similar to scenes elsewhere in the world – of overrun hospitals and doctors choosing “who to treat and who to turn away”.

“If we don’t act now, we know that eventually the NHS would not be able to cope,” he said.

West Midlands Ambulance Service experienced its busiest-ever day on Monday, handling 5,383 emergency calls due to a combination of Covid-19 pressures and winter weather.

And hospitals in Greater Manchester are in danger of “falling over” as cancer operations risk being cancelled, Manchester City Council’s leader Sir Richard Leese said.

All of the UK is now under strict virus curbs, with Wales, Northern Ireland and most of Scotland also in lockdown.

While England’s lockdown became law at midnight, MPs voted overwhelmingly – by 524 to 16 – in support of the tougher measures on Wednesday evening.

Labour backed the restrictions but 12 Conservative MPs rebelled to vote against.

Speaking during the Commons debate, Health Minister Helen Whately said although the regulations allowed the lockdown to be in place until the end of March, the government did not expect it to continue until then.

Instead, the plan was for a “steady, controlled and evidence-led move down through the tiers on a local basis” to exit lockdown.

Most agree they are needed now, even if they do not like them.

The start of the vaccination programme does seem to have changed the political landscape too.

This vote means the government will not have to face MPs again on these restrictions until March.

The questions from some Tory backbenchers suggest there will be pressure on the government to start lifting them long before then though – perhaps as soon as next month if the vaccination programme goes to plan.

MPs have also indicated they will be watching its progress with close attention.

Meanwhile, GCSEs, A-level and AS-level exams will be cancelled this year in England, replaced by a form of teacher-assessed grades, Education Secretary Gavin Williamson said.

He said that during this lockdown, every school will be expected to provide between three and five hours of virtual teaching each day and that 750,000 laptop and tablet devices will have been distributed by the end of next week.

These numbers will keep rising

The figures are stark. But sadly they were to be expected. Infection rates were climbing throughout December – they are now more than four times higher than they were at the start of last month.

The fact deaths have gone over 1,000 for the first time since April is alarming.

But one caveat to that is that the figures over the past week have been jumping around because of delays reporting deaths over the Christmas period.

A better way to measure deaths is to look at the average number of deaths over the course of the week. This metric shows we are seeing just below 700 a day – although that is still up by 40% compared to the figure before Christmas.

And these numbers are only going to continue rising. That’s because this week’s infections are next week’s hospital admissions and some of those being admitted then will die maybe a week or so later.

Lockdown is expected to have an impact, but it will take some time – and even then it may have less affect than previous ones because of the more transmissible variant.

The rollout of the vaccines cannot come soon enough.

It came after Prime Minister Boris Johnson told MPs England’s new lockdown would not end with a “big bang” but a “gradual unwrapping”.

He said that, unlike during the first lockdown from March 2020, vaccines now offered “the means of our escape”.

But he said there was a race to vaccinate vulnerable people quickly, with the government setting a target of immunising the four most vulnerable groups – some 13 million people – by mid-February.

Vaccines Minister Nadhim Zahawi earlier said he was “confident” the “ambitious” target would be met, adding that community pharmacies would be brought in to assist the vaccination programme.

On Tuesday, Mr Johnson said 1.3 million people in the UK had been vaccinated so far.

The locations for seven mass vaccination centres in England have been announced by the government.

Sites in Stevenage, London, Newcastle, Manchester, Surrey, Bristol and Birmingham will be staffed by NHS workers and volunteers from next week.

How have you been affected by Covid? What will lockdown mean for you? Please get in touch by emailing haveyoursay@bbc.co.uk.