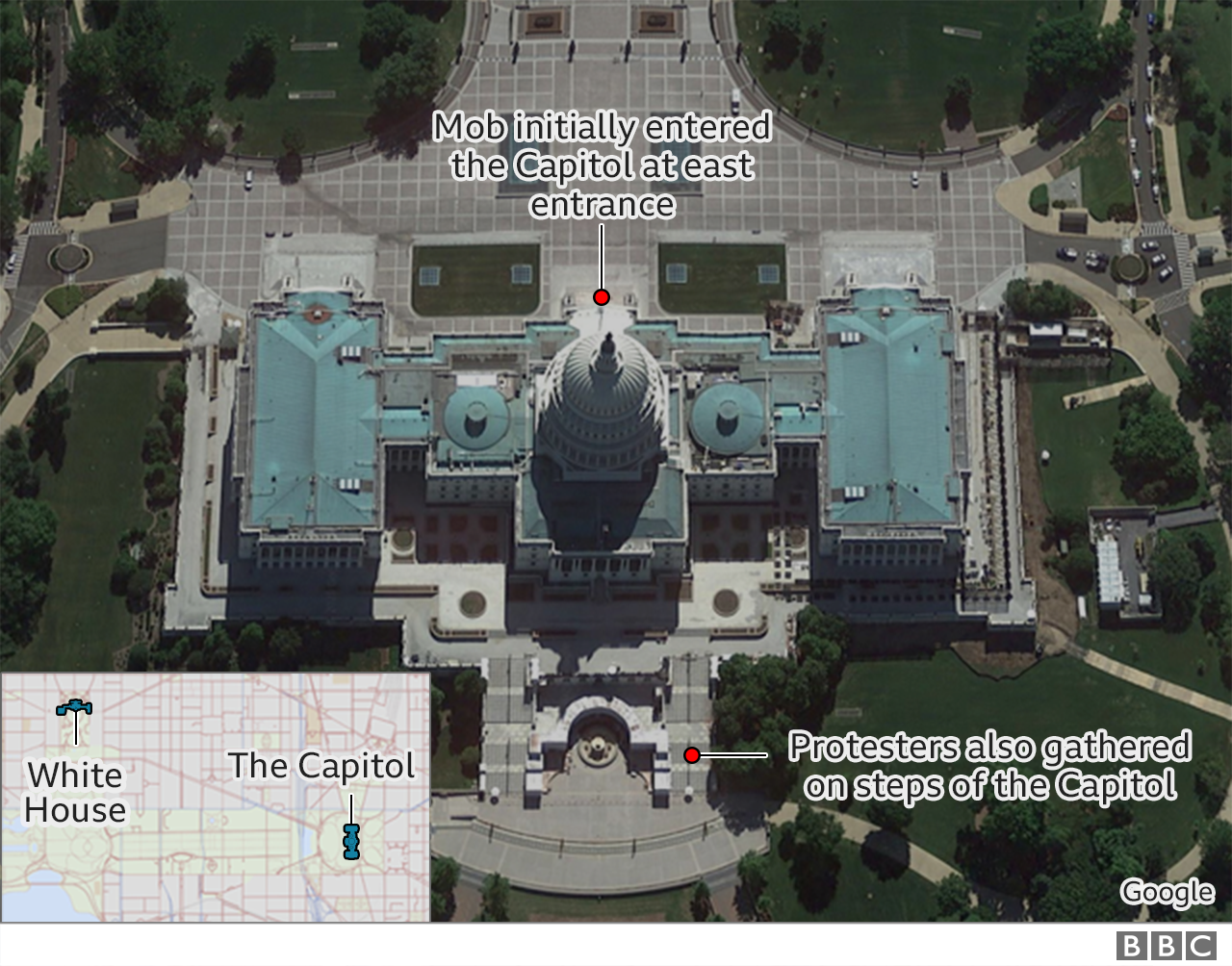 Publishedduration1 hour agomedia captionWhen a mob stormed the US capitolThe US Congress has certified Joe Biden’s victory in the presidential election, hours after Trump supporters stormed the building in an attack that saw four people die. Lawmakers resumed the session after police managed to remove the mob, which had been encouraged by President Donald Trump…

The US Congress has certified Joe Biden’s victory in the presidential election, hours after Trump supporters stormed the building in an attack that saw four people die.

Lawmakers resumed the session after police managed to remove the mob, which had been encouraged by President Donald Trump in a bid to overturn his defeat.

The certification clears the way for Mr Biden to be sworn in on 20 January.

Democrat Joe Biden’s victory was confirmed at about 03:30 local time (08:30 GMT) on Thursday by a joint session presided over by Vice-President Mike Pence, who said the violence had been a “dark day in the history of the United States Capitol”.

Wednesday’s chaotic scenes followed months of escalating rhetoric from Mr Trump and some Republican allies that sought to undermine the result of the 3 November election. The invasion of the Capitol by the president’s supporters – some armed – was an event without precedent in modern American history.

Mr Biden blasted the “insurrection” as Mr Trump, while telling the mob to “go home”, continued to make false claims of electoral fraud. The outgoing president’s Twitter and Facebook accounts were later frozen.

After objections by some Republican lawmakers to overturn the result in Arizona and Pennsylvania were rejected, Congress formally certified the final electoral college vote with Mr Biden receiving 306 votes to Mr Trump’s 232.

Shortly afterwards Mr Trump – whose social media accounts remain blocked – said in a statement: “Even though I totally disagree with the outcome of the election, and the facts bear me out, nevertheless there will be an orderly transition on January 20th.”

Meanwhile, Washington DC Mayor Muriel Bowser said one of the four dead – a woman – was part of a group that forced entry into the House room while it was still in session. They were confronted by plainclothes officers, and an officer pulled out a weapon and fired it.

The woman was taken to hospital and later proclaimed dead. She has not been officially named, but local media identified her as San Diego-area US Air Force veteran and Trump supporter Ashli Babbit.

One woman and two men died as a result of “medical emergencies”, officials said, without giving details. At least 14 members of the police were injured during the unrest.

The rampage came as two Democrats won Senate seats in elections in Georgia, which shifted the balance of Congress to their party’s effective political control. This major political victory will ease the passage of Mr Biden’s agenda after he is inaugurated.

A deadly day and Trump’s legacy

This is how the Trump presidency ends. Not with a whimper, but with a bang.

For weeks, Donald Trump had been pointing to 6 January as a day of reckoning. It was when he told his supporters to come to Washington DC, and challenge Congress – and Vice-President Mike Pence – to discard the results of November’s election and keep the presidency in his hands.

Crisis can bring political opportunity, and there are many politicians who will not hesitate to use it to gain advantage.

Donald Trump – for now – is still in power. And while he may be chastened, he may be sitting in the White House residence watching television temporarily without his social media outlet, he will not be silent for long.

And once he decamps for his new Florida home, he could begin making plans to settle scores and, perhaps, someday return to power and rebuild a legacy that, for the moment, lies in tatters.

Pence certifies his own loss

For days Mr Trump had been piling pressure on his vice-president to block certification of the result. But in a letter to Congress on Wednesday, Mr Pence said he had no “unilateral authority to decide which electoral votes should be counted”.

In declaring the final vote totals, Mr Pence said this “shall be deemed a sufficient declaration of the persons elected president and vice-president of the United States.”

Earlier, Senate Republican leader Mitch McConnell also definitively broke with Mr Trump in an emotional speech from the chamber floor, saying: “If this election were overturned by mere allegations from the losing side, our democracy would enter a death spiral.”

After the session resumed, Senate Democratic leader Chuck Schumer blasted the mob at the Capitol as “rioters and insurrectionists, goons and thugs, domestic terrorists”, saying the president “bears a great deal of the blame”.

Senator Kelly Loeffler, who lost her bid for election in Georgia’s vote on Tuesday, said she could no longer in good conscience vote against certification as she had originally planned, citing the “abhorrent” invasion of the Capitol.

With two weeks before Mr Trump leaves office, there are calls for him to be removed beforehand for instigating the attack on Congress. US media say some members of his cabinet have discussed invoking the 25th amendment to the Constitution, dealing with a president deemed unfit for office.

Chaotic scenes at the Capitol

Protesters surged up the Capitol steps shoving past barricades and officers in riot gear to penetrate the building. The mob – some of whom wore body armour – used chemical irritants to attack police, according to Washington Metropolitan Police Chief Robert Contee.

They shouted and waved pro-Trump, US and Confederate flags as they roamed the halls, demanding the results of the presidential election be overturned.

Members of Congress scrambled for cover under their seats as tear gas was fired. Several thousand National Guard troops, FBI agents and US Secret Service personnel were deployed to help overwhelmed Capitol police.

The occupation of the Capitol lasted more than three hours before the building was secured by law enforcement. At least 52 people have been arrested, the vast majority of them for violating the 18:00 to 06:00 curfew.

Washington is under an extended state of emergency until after Mr Biden’s inauguration.

Responding to the violence, Mr Biden said the mob’s activity “border[ed] on sedition” and that democracy was “under unprecedented assault”.

“To storm the Capitol, to smash windows, to occupy offices on the floor of the United States Senate, rummaging through desks, on the House of Representatives, threatening the safety of duly elected officials. It’s not protest; it’s insurrection.”

Mr Trump then posted a recorded video on Twitter saying: “I know your pain. I know you’re hurt… We had an election that was stolen from us. It was a landslide election, and everyone knows it, especially the other side. But you have to go home now. We have to have peace.”

For the first time, Twitter froze Mr Trump’s account, saying it would be locked for 12 hours. The social media giant demanded he delete three tweets that it said could stoke violence and threatening “permanent suspension”. Facebook and Instagram followed suit.

Hours earlier, Mr Trump had addressed a “Save America Rally” outside the White House, where he encouraged supporters to keep contesting the election result: “Our country has had enough and we will not take it anymore.”

Political figures from around the world condemned the violence. In the US, former President Barack Obama said history would rightly remember the assault on the Capitol as “as a moment of great dishonour and shame for our nation”.

Former President George W Bush said: “It is a sickening & heartbreaking sight. This is how election results are disputed in a banana republic – not our democratic republic.”

There were also protests on Wednesday at state legislatures in Kansas, Georgia, Utah and on the other side of the country in Oregon and the north-western state of Washington.