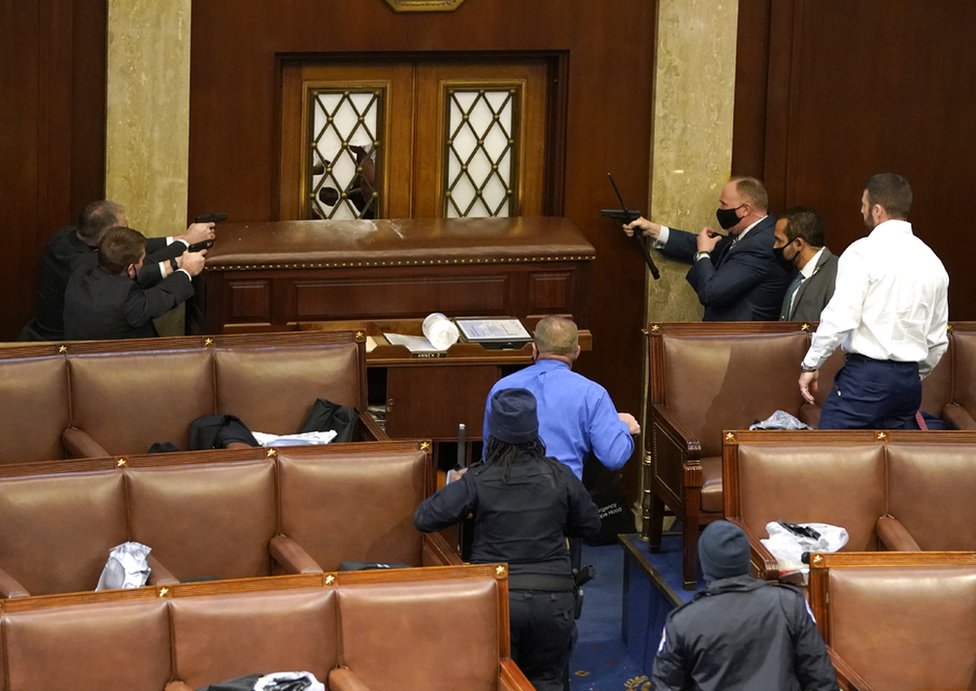 Publishedduration2 hours agoimage copyrightMike Theiler / ReutersAs violent Trump supporters surged past barricades and into the US Capitol, news agency photographers – who were there to document the vote certifying Joe Biden’s election win – captured extraordinary scenes. The last time government buildings were breached in Washington was in 1814 and the invaders were British…

As violent Trump supporters surged past barricades and into the US Capitol, news agency photographers – who were there to document the vote certifying Joe Biden’s election win – captured extraordinary scenes.

The last time government buildings were breached in Washington was in 1814 and the invaders were British soldiers.

But in 2021 a Trump supporter, carrying the Confederate flag, is walking freely through the halls near the entrance to the Senate, encountering little resistance.

The Confederacy was the group of southern states that fought to keep slavery during the American Civil War. In this image, the oil paintings of political figures in the background emphasise this imagery of the past.

There have been renewed calls for the Confederate flag to be banned across the US following the anti-racism protests sparked by the police killing of George Floyd, a black man.

However Mr Trump has defended use of the flag, calling it a matter of free speech.

One man in a Trump beanie here walks between the red guide ropes, as many visitors might do on a guided-tour to view the Crypt, the Statuary Hall and the Rotunda.

But this man is carrying a podium bearing the seal of the Speaker of the House, as he poses in front of a painting depicting the surrender of Gen Burgoyne in the war of independence.

Another man, identified as Jake Angeli, an ardent Trump supporter who has attended a number of the president’s rallies, shouts as he makes his way to the Senate Chamber.

His incongruous garments set him apart from other protesters wearing black hoodies. These Trump activists stand by taking selfies, but he has clearly come here to be photographed by others.

The apparent lack of a security presence is in sharp contrast to other Washington protests where there is a highly visible presence of heavily armed security forces protecting US institutions.

Another Trump supporter, identified as Richard Barnett, sits with one boot disrespectfully on a desk that is at the very centre of power in Congress. It is in the office of House Speaker Nancy Pelosi.

In the scene, unimaginable days earlier, Barnett in his baseball cap and checked shirt resembles a raconteur regaling friends with tales of his exploits.

The image went viral as did pictures of the notes he and others left on Ms Pelosi’s desk.

This dramatic image shows how the formal proceedings came to a violent halt as Capitol police officers drew their guns on doors being attacked by protesters intent on entering the House Chamber.

Many commentators asked if they were watching a coup unfold as doors were barricaded and firearms brandished.

The composition is reminiscent of a scene in a Hollywood Western, the lawmen bracing for the doors to be breached.

US President-elect Joe Biden made an impassioned TV address describing the scenes as “an assault on democracy” – this chilling picture encapsulates what he meant.