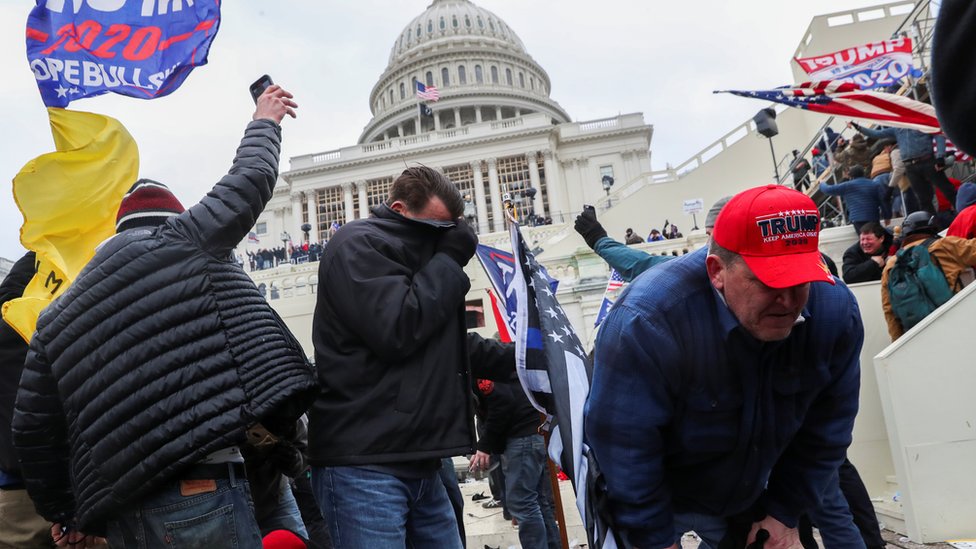 Publishedduration55 minutes agoBoris Johnson has condemned the “disgraceful scenes” in the US where protesters have stormed Congress.Supporters of President Donald Trump breached the Capitol building where lawmakers met to confirm President-elect Joe Biden’s win.The PM said the US “stands for democracy around the world”, adding it was “vital that there should be a peaceful and…

Boris Johnson has condemned the “disgraceful scenes” in the US where protesters have stormed Congress.

The PM said the US “stands for democracy around the world”, adding it was “vital that there should be a peaceful and orderly transfer of power.

Labour leader Sir Keir Starmer said it was a “direct attack on democracy”.

Earlier, a joint session of Congress had been counting and confirming electoral college votes from the US election in November.

But after a rally held by President Trump in Washington D.C, a large crowd of his supporters made their way to the Capitol and some managed to storm the building.

The Congress meeting was suspended and forced into recess.

UK MPs from across the political spectrum have criticised the events in the US.

Foreign Secretary Dominic Raab said there was “no justification for these violent attempts to frustrate the lawful and proper transition of power”, while Home Secretary Priti Patel called the scenes “unacceptable and undemocratic”.

She added: “There is no justification for this violence and Donald Trump must condemn it.”

Her Conservative colleague, and former Foreign Secretary, Jeremy Hunt directly addressed President Trump for telling the crowd to march on Congress, tweeting: “He shames American democracy tonight and causes its friends anguish – but he is not America.”

Labour’s deputy leader, Angela Rayner said: “The violence that Donald Trump has unleashed is terrifying, and the Republicans who stood by him have blood on their hands.”

And shadow foreign secretary Lisa Nandy said the events were “the legacy of a politics of hate that pits people against each other and threatens the foundations of democracy”.

He tweeted: “What a legacy the events of today are to his time in office. Shameful, shocking an affront to democracy.”

Leader of the Liberal Democrats, Ed Davey, called the scenes “absolutely horrendous”, while his party’s foreign affairs spokeswoman, Layla Moran, said: “The scenes coming out of Washington tonight are an attack on democracy.”