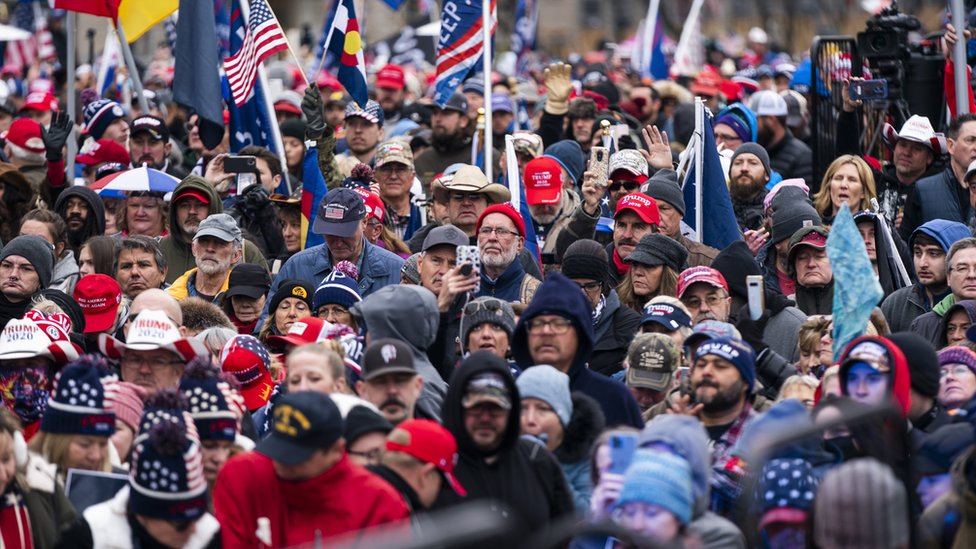 Publishedduration3 hours agoimage copyrightEPAimage captionSupporters of Donald Trump have been gathering in Washington ahead of the Congress sessionUS lawmakers are set to meet on Wednesday to confirm Joe Biden’s victory in the presidential election amid protests from Trump supporters.A joint session of Congress will count and confirm electoral college votes.Some Republicans have pledged to support…

US lawmakers are set to meet on Wednesday to confirm Joe Biden’s victory in the presidential election amid protests from Trump supporters.

A joint session of Congress will count and confirm electoral college votes.

Some Republicans have pledged to support President Donald Trump’s efforts to overturn the result by formally objecting at the session, in a bid that is almost certain to fail.

Hundreds of National Guard members are being mobilised.

Supporters of Mr Trump have begun gathering in Washington DC to rally against the certification of his defeat, and counter-protests are expected.

In a tweet on Tuesday, Mr Trump announced that he would be speaking at the “SAVE AMERICA RALLY” the following day.

He has refused to concede the 3 November election, repeatedly alleging fraud without providing any evidence.

Mr Biden, a Democrat, is due to be inaugurated as president on 20 January.

What will happen in Congress?

The two houses of Congress – the House of Representatives and the Senate – will hold a joint session on Wednesday, where they will open sealed certificates from the US’ 50 states containing a record of their electoral votes.

Under the US system, voters cast their ballots for “electors”, who in turn formally vote for the candidates weeks after the election. Mr Biden received 306 votes under the electoral college system, to Mr Trump’s 232.

Bipartisan representatives from the two chambers will read out the results on Wednesday and do an official count.

There is a split in the Republican party, with dozens of House Republicans and a smaller group of Senators expected to object to the count from some of the key swing states.

Ted Cruz is leading a group of about a dozen senators calling for a 10-day delay to audit unsubstantiated allegations of election fraud.

Vice-President Mike Pence – who as president of the Senate is due to oversee the session and declare Mr Biden the winner – said he welcomed the move.

He stopped short of repeating allegations of fraud but his chief of staff said Mr Pence shared what he called “the concerns of millions of Americans about voter fraud and irregularities”.

By US election law, Mr Pence’s duty in the proceedings is purely administrative, but Mr Trump has urged his vice-president to “come through”.

Objections that are endorsed by a member of the House of Representatives and a member of the Senate must be considered by lawmakers in a two-hour debate, followed by a vote.

Top Republicans have said the Senate’s role in certifying the election is largely ceremonial and should not be an opportunity for further lengthy debate about the result.

What about the protests?

Thousands of supporters of Mr Trump, including some far-right activists, are expected to join protests in Washington, with crowds beginning to gather on Tuesday.

“I’m just here to support the president,” one protester told the Associated Press news agency. “I’m not sure what he can do at this point, but I want to hear what he has to say.”

Officials have warned Trump supporters not to carry guns.

Police on Monday arrested the leader of the far-right Proud Boys, charging him with destruction of property related to a previous protest. Enrique Tarrio was later released but a judge ordered him to stay out of Washington.

Mr Tarrio has said on the social media app Parler that the Proud Boys will “turn out in record numbers”, referring to his members as “the most notorious group of extraordinary gentlemen”.

The National Guard has been requested by Washington DC’s mayor to assist local authorities. Officials say the troops will not be armed and will be there to help with crowd management and traffic control.