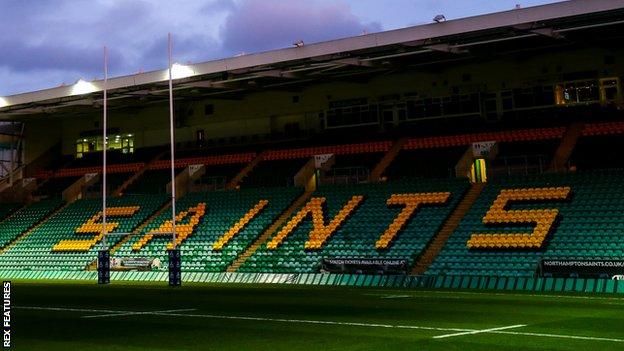 Northampton are scheduled to play Leinster in the Champions Cup on 15 JanuarySaturday’s East Midlands derby between Northampton and Leicester has been cancelled due to “a number of positive” coronavirus tests in the Saints camp.In addition to the confirmed cases, “further players” are also having to isolate as close contacts.Saints – whose last Premiership fixture…

Saturday’s East Midlands derby between Northampton and Leicester has been cancelled due to “a number of positive” coronavirus tests in the Saints camp.

In addition to the confirmed cases, “further players” are also having to isolate as close contacts.

Saints – whose last Premiership fixture at London Irish was also called off – will not train again until Monday.

The game will not be rescheduled, with a Premiership Rugby panel deciding the allocation of points “in due course”.

“We are incredibly disappointed and frustrated that we are unable to proceed with such an important fixture for the club,” said Northampton director of rugby Chris Boyd.

Five Premiership games have now been cancelled this season due to Covid-19 outbreaks and there have also been more positive tests at champions Exeter this week, though they still expect their match against Bristol to go ahead on Saturday.

In the previous four instances, the team affected by the virus were awarded two points and a defeat by a Premiership panel, with their opponents given four points and a win.

Premiership Rugby have confirmed they will be publishing additional Covid-19 protocols for the league around matchdays and training.

A spokesperson said they will make the Premiership “even more Covid safe” and details will be released in the next 24 hours.

Meanwhile, the players involved at Northampton have begun a 10-day isolation period.

“The club has been absolutely rigorous in how we have followed the protocols laid out for us, and despite returning a number of positive tests this week, we were confident that we have more than enough of our squad still healthy and available to play the game if required,” said Boyd.

“However, we are following the advice we have been given, which was not to play the game and to close our training facility until next week.”