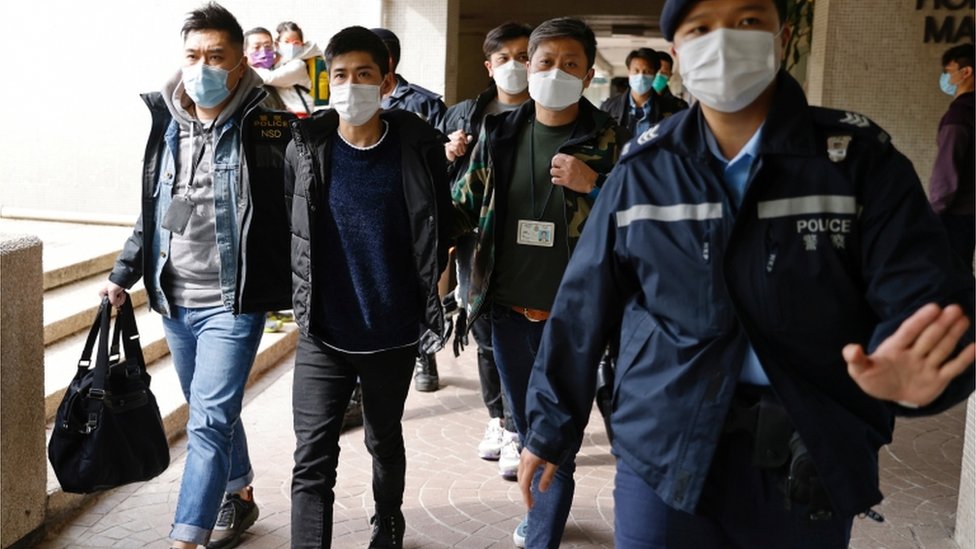 Publishedduration11 minutes agoimage copyrightReutersimage captionLester Shum was first barred from running for office, then arrestedHong Kong has arrested dozens of pro-democracy activists and politicians, accusing them of trying to “overthrow” the city’s government.The group, arrested under a controversial new security law, were involved in an unofficial “primary” vote to select opposition candidates ahead of postponed…

Hong Kong has arrested dozens of pro-democracy activists and politicians, accusing them of trying to “overthrow” the city’s government.

The group, arrested under a controversial new security law, were involved in an unofficial “primary” vote to select opposition candidates ahead of postponed 2020 elections.

Hong Kong’s security secretary has said their actions were “subversive”.

The arrests formed part of the largest crackdown since the law’s introduction.

Beijing imposed the legislation on the semi-autonomous territory in June, saying it was necessary to curb months of sometimes violent pro-democracy protests.

But the crackdown on Wednesday appeared to confirm the fears of many who warned about the reach of the law, with Amnesty International saying the arrests are “the starkest demonstration yet of how the national security law has been weaponised to punish anyone who dares to challenge the establishment”.

What happened on Wednesday?

Among those arrested are thought to be three members of the Civic Party, seven members of the Democratic Party, 21 opposition district councillors, 13 candidates from the primaries, two academics behind the primaries strategy, and one US citizen and human rights lawyer from the raided law firm.

Well-known opposition figures are among the detained including James To, Lam Cheuk Ting, Lester Shum and Benny Tai, one of the initiators of the primaries. The US lawyer is John Clancey, chairman of the Asian Human Rights Commission.

Hours after the dawn arrests John Lee, Hong Kong’s security secretary, confirmed a group of people had been arrested as part of an operation targeting those suspected of “overthrowing” the city’s government.

The government will not tolerate “subversive” acts, he said, speaking at the city’s Legislative Council.

What were the primaries?

In July last year, an alliance of opposition parties ran independently organised primaries to see which of their candidates had the best chances in September’s election for the Legislative Council, Hong Kong’s parliament.

More than 600,000 people voted in the primaries. The election was later postponed, with officials citing concerns over the pandemic as the reason for the delay.

The opposition groups had hoped that winning more seats would give them enough power to block government proposals and increase pressure for democratic reforms.

Hong Kong’s leader Carrie Lam had warned at the time the primaries could amount to subversion if the candidates intended to obstruct government policies through their election.

Several of the opposition figures planning to stand in the LegCo election have since been disqualified from running, including Joshua Wong and Lester Shum.

Former journalist Gwyneth Ho, who rose to prominence covering the 2019 protests and was later disqualified from running for LegCo, was also among those arrested on Wednesday.

Most of the opposition lawmakers in the current LegCo resigned in November en masse in protest at four of them being dismissed from parliament.

The new security law has spread what activists often call “white terror” across the city.

When authorities introduced the law, they claimed it would target only a small number of activists, but the wide-ranging nature of today’s operation has led many to fear that authorities are now trying to eliminate the entire opposition camp.

The legislation already has all but silenced the street protest movement and led to a growing number of activists fleeing the territory.

Today’s arrests represent the largest crackdown on the pro-democracy camp since the law was introduced. If charged under the new national security law, they could face life in prison.

What’s been the reaction?

The crackdown has stunned people in Hong Kong and will have a chilling effect on free speech, activists say.

“Seeing the news today I feel completely shocked. I feel very disappointed. It seems that such major things are happening in Hong Kong and there’s nothing we can do about it. I feel very unhappy and it seems that even during the epidemic the government can still do so many things to terrorise people,” Mannie Ng, a Hong Kong resident, told Reuters news agency.

Antony Blinken, the pick for next US Secretary of State by President-elect Joe Biden, said they were an “assault on those bravely advocating for universal rights”.

“The Biden-Harris administration will stand with the people of Hong Kong and against Beijing’s crackdown on democracy.”

US Senator Ben Sasse, member of the Select Committee on Intelligence, warned that Beijing was timing the crackdown to coincide with the global attention focused on the US.

Chinese President Xi Jinping “sees a divided and distracted America, and he isn’t wasting the moment”, the senator said. “These despicable raids expose the Chinese Communist Party for the cowardly dictators they are.”

“Beijing once again has failed to learn from its mistakes in Hong Kong: that repression generates resistance, and that millions of Hong Kong people will persist in their struggle for their right to vote and run for office in a democratically elected government,” she said.

Nathan Law, a prominent Hong Kong activist who fled the territory in July last year, said the widespread arrests had taken “the suppression of political freedom and freedom of speech” to “another level”.

“Anyone who is still defending the National Security Law and making peace is the enemy of Hong Kong people.”

What is Hong Kong’s security law?

The security law punishes what China broadly defines as secession, subversion, terrorism and collusion with foreign forces with up to life in jail.

It has been widely criticised by rights groups and Western nations as effectively curtailing dissent.

A former British colony, Hong Kong was handed back to China in 1997. It retained more civil and political freedoms than the mainland has.

Activists say that over the past years, these freedoms have been eroded while pro-democracy protests have often led to violent clashes with police.

The Chinese government has defended the law, saying it will help return stability to the territory, which has been shaken by pro-democracy protests, and bring it more into line with the Chinese mainland.

After the law was introduced, a number of pro-democracy groups disbanded out of fears for their safety.

Over the past weeks and months, several high profile court cases under the security law have started.

Media tycoon Jimmy Lai has been charged under it as well as several activists who tried to flee the territory by boat last August.