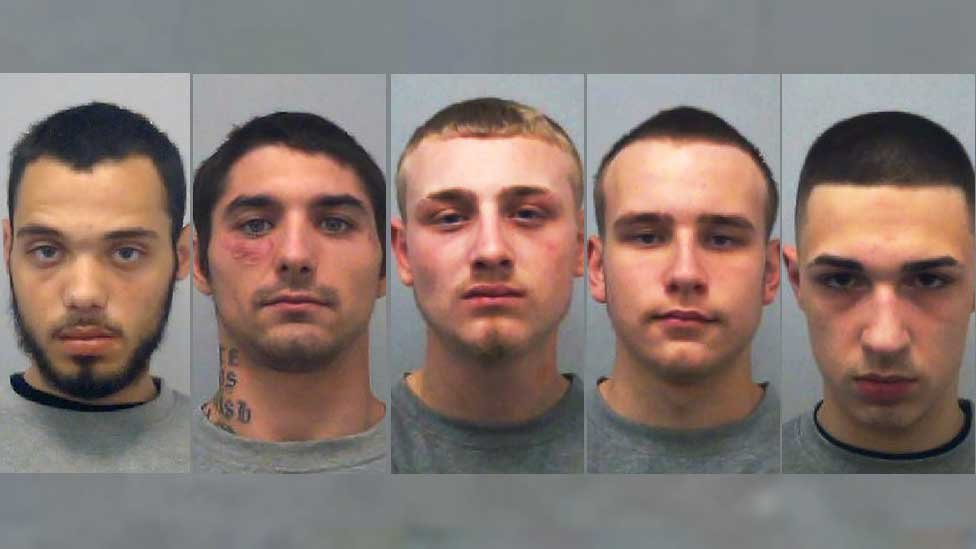 Publishedduration34 minutes agoimage copyrightThames Valley Policeimage captionClayton Barker, Earl Bevans, Charlie Chandler, Jamie Chandler and Ben Potter must serve minimum sentences of between 22 and 28 yearsFive males who stabbed two teenagers to death in a gang-related attack at a house party have been jailed for life.Dom Ansah and Ben Gillham-Rice, both 17, were fatally…

Five males who stabbed two teenagers to death in a gang-related attack at a house party have been jailed for life.

Dom Ansah and Ben Gillham-Rice, both 17, were fatally stabbed in a revenge attack in Milton Keynes in October 2019.

Earl Bevans, 23, pleaded guilty at the start of the trial.

The court previously heard the attackers were either members of, or associated with, the B3 gang in west Bletchley, Milton Keynes.

The trial heard the murders were part of a revenge attack after one of the B3 gang was subjected to a “humiliating” ordeal by members of the M4 gang.

He was assaulted, stripped and taunted in woodland in the Westcroft area of Milton Keynes in 2017.

This was recorded and shared on social media, the court heard, and the teenager later named Dom Ansah as one of the perpetrators.

The court heard that B3 were tipped-off that people associated with M4 were at the 2019 party at an address on Archford Croft in Emerson Valley.

Armed and wearing masks, three stormed the rear of the house while one, armed with a large machete, blocked the front door.

Two other people were seriously injured.

Sentencing, Mr Justice Spencer called them “senseless and tragic” killings that came about through a “culture of violence and knives” promoted through social media.

The judge said Dom Ansah had been a “leading member” of M4.

He added that “it was through his association with Dom Ansah, albeit not a member of the gang himself, that Ben Gilham-Rice was at the party that night with M4 gang members”.

Ben’s mother Suzanne Gillham said she had felt “physically sick” being so close to her son’s killers during the court case.

She called the use of knives “cowardly” and added that she “was hoping to see some remorse on the faces of the juveniles and there was none”.

“They just smirked and walked out with a smile,” she said

Tracey Ansah, Dom’s mother, added: “Every day we had to put on a mask and a brave face to look at them.”