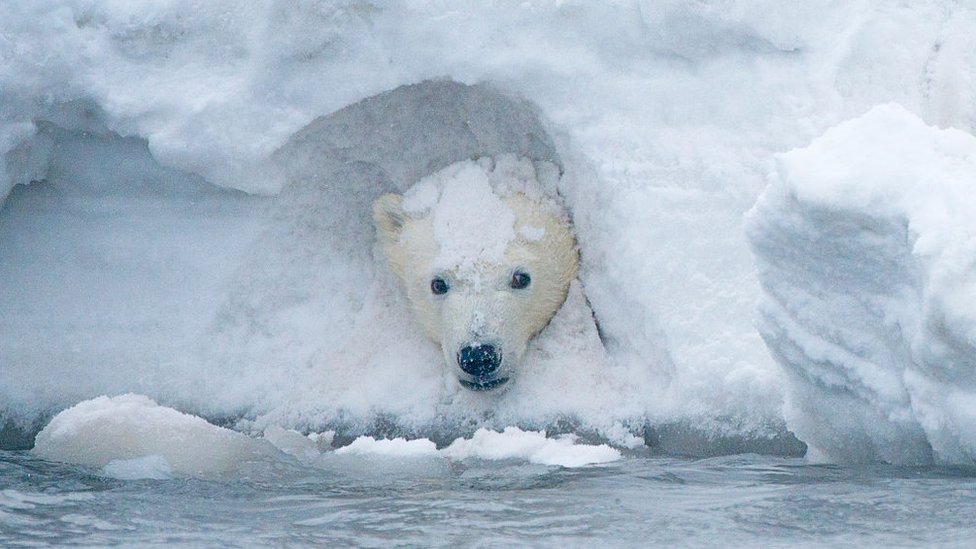 Publishedduration4 hours agoimage copyrightGetty Imagesimage captionA polar bear cub playing in a snow drift in the area of the proposed oil lease salesThe Trump administration is pushing ahead with the first ever sale of oil leases in the Arctic National Wildlife Refuge (ANWR).The giant Alaskan wilderness is home to many important species, including polar bears,…

The Trump administration is pushing ahead with the first ever sale of oil leases in the Arctic National Wildlife Refuge (ANWR).

The giant Alaskan wilderness is home to many important species, including polar bears, caribou and wolves.

But after decades of dispute, the rights to drill for oil on about 5% of the refuge will go ahead.

It is a critically important location for many species, including polar bears.

In the winter months, pregnant bears build dens in which to give birth.

As temperatures have risen and sea ice has become thinner, these bears have started building their dens on land.

The coastal plain of the ANWR now has the highest concentration of these dens in the state.

The refuge is also home to Porcupine caribou, one of the largest herds in the world, numbering around 200,000 animals.

In the spring, the herd moves to the coastal plain region of the ANWR as it is their preferred calving ground.

The same coastal plain is now the subject of the first ever oil lease sale in the refuge.

The push for exploration in the park has been a decades long battle between oil companies supported by the state government and environmental and indigenous opponents.

Many of Alaska’s political representatives believe that drilling in the refuge could lead to another major oil find, like the one in Prudhoe Bay, just west of the ANWR.

Prudhoe Bay is the largest oil field in North America and supporters believe the ANWR shares the same geology, and potential reserves of crude oil.

Oil revenues are critical for Alaska, with every resident getting a cheque for around $1,600 every year from the state’s permanent fund.

In 2017, the Trump administration’s tax cutting bill contained a provision to open up the ANWR coastal plain for drilling. It was seen as a way of offsetting the costs of the tax cuts.

The US Bureau of Land Management is now selling the drilling rights to 22 tracts of land covering about one million acres. These oil and gas leases last for 10 years.

They will not destroy our sacred lands!!! the fight is far from over….. Stand with the Gwich’in Protect the Arctic Refuge the calving grounds of the majestic porcupine caribou herd.

A last-minute attempt to stop the sale in the courts failed but opponents say it will not be the end of their efforts to protect the refuge from drilling.

“The Trump administration is barrelling forward without doing the careful, legally required analyses of the impacts such activity will have on the environment or the Gwich’in people who have relied on this land for millennia,” said Kristen Monsell, a senior attorney at the Center for Biological Diversity, which is headquartered in Tucson, Arizona, who had sought an injunction against the sale.

“That’s why we’ve taken them to court. We can’t let Trump turn this amazing landscape into an oil field.”

Reports indicate that interest in the lease sales has been low.

While estimates suggest around 11 billion barrels of oil lie under the refuge, it has no roads or other infrastructure, making it a very expensive place to drill for oil.

Several large US banks have said they will not fund oil and gas exploration in the area.

There is also the matter of a change of leadership in the White House. The Biden team have nominated Deb Haaland as Secretary of the Interior. She is on record as being strongly opposed to drilling in the ANWR.

With climate change set to be a central focus for the Biden administration, it’s likely that efforts to extract new fossil fuels in Alaska will be subject to review and delay.

This could ultimately limit the interest and opportunity for oil exploration in the refuge.