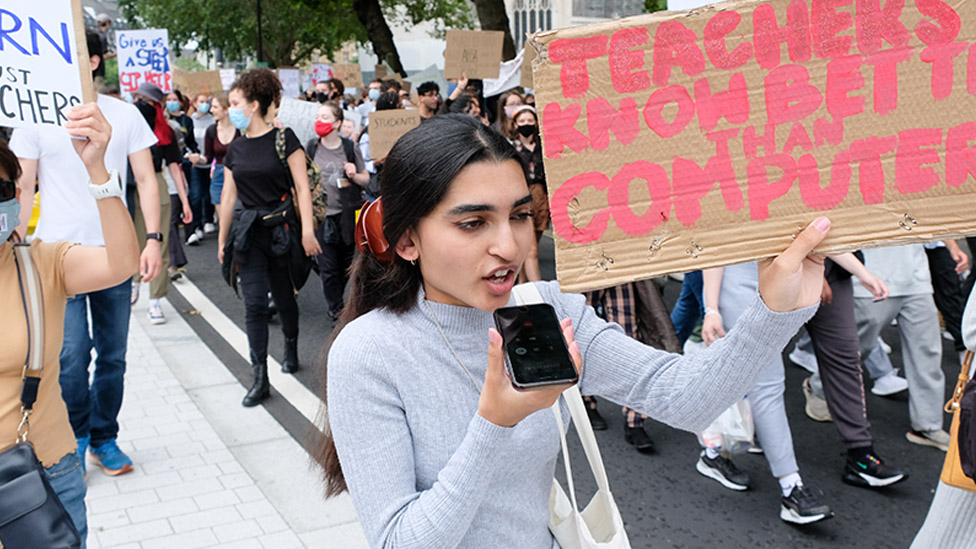 By Sean CoughlanBBC News family and education correspondentPublishedduration1 hour agoimage copyrightGetty Imagesimage captionThere are warnings that replacement grades must avoid the problems that saw protests and U-turns last summerHead teachers have warned a replacement system for cancelled exams in England must avoid the “shambles” of last year’s results.Education Secretary Gavin Williamson is to make a…

Head teachers have warned a replacement system for cancelled exams in England must avoid the “shambles” of last year’s results.

Education Secretary Gavin Williamson is to make a statement on “alternative arrangements” for GCSE and A-level exams cancelled in the pandemic.

This could include using teachers’ estimated grades.

A replacement system must not “inflict further disadvantage on students”, says the exams watchdog Ofqual.

Geoff Barton, leader of the ASCL head teachers’ union, said there were “no easy answers” in picking an approach – but it had to avoid repeating the “disaster” of last summer’s cancelled exam season.

He said there was a “real need for urgency” to allow schools time to plan – and that any system for grading had to show “fairness and consistency”.

Written papers for GCSEs and A-levels are not going ahead – after this week’s decision that it was no longer feasible with so much time lost in the Covid pandemic and the latest lockdown.

Mr Williamson will instruct the exams watchdog to come up with proposals for an alternative way of deciding results, which could be used for jobs, staying on in school or university places.

Last year’s attempts to find an alternative approach to exam results, which initially used an algorithm, descended into chaos – and eventually switched to using teachers’ grades.

And without any exam papers or standardised mock exams, the use of teachers’ grades, with some process of moderation, is likely to be a key option once again.

Vocational exams, such as BTecs, are carrying on, if schools and colleges decide to continue with them.

But if students cannot take BTec exams this month as planned, they will be able to take them at a later date or otherwise still be awarded a grade, if they have “enough evidence to receive a certificate that they need for progression”, says the awarding body Pearson.

An Ofqual spokeswoman said they could consider options for replacement exam results, academic and vocational, “to ensure the fairest possible outcome in the circumstances”.

Although the process is only formally beginning, with a consultation likely on proposals, it is understood that contingency planning had already started to find a back-up if exams were cancelled.

The exams watchdog’s decisions will face much scrutiny – with the previous head of Ofqual resigning after last summer’s U-turns over grades.

“We are discussing alternative arrangements with the Department for Education. We know that many are seeking clarity as soon as possible,” said Simon Lebus, Ofqual’s interim chief regulator.