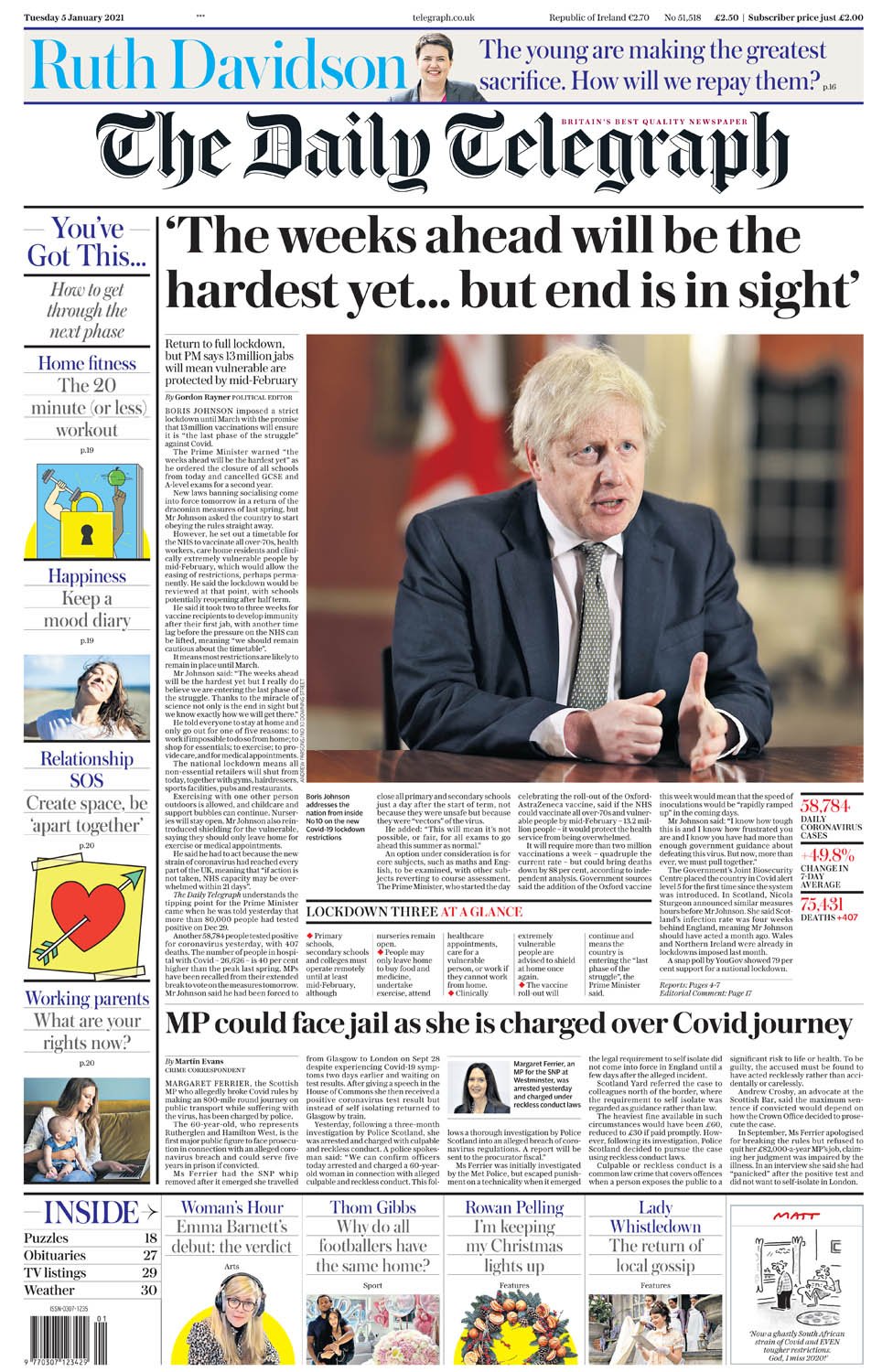 By BBC NewsStaffPublishedduration1 hour agoimage captionAnother national lockdown in England is the focus of all of Tuesday’s front pages. Prime Minister Boris Johnson has announced that everyone in the country must stay at home except for permitted reasons during a new coronavirus lockdown expected to last until mid-February. The i newspaper brands it “Lockdown 3:…

The front pages all lead with Boris Johnson’s decision to put England into a new lockdown.

“It’s back to Square One” suggests the Daily Mail, describing the measures as “the most draconian” since last spring.

The Daily Telegraph understands the “tipping point” for the prime minister came on Monday, when he was told more than 80,000 people in the UK had tested positive for coronavirus on 29 December.

The Guardian says the crackdown comes amid “catastrophic figures” for hospital admissions in England and warnings of a “grim death toll” by the end of the month.

The Financial Times cites John Edmunds, an epidemiologist at the London School of Hygiene and Tropical Medicine, warning that it was now “baked in” that the UK’s Covid death toll would exceed 100,000.

The Daily Mirror describes the lockdown as “yet another U-turn” by the prime minister. It accuses the government of “shameful bungling, indecision and weakness” which, once again, it says, means it’s down to the public to show “strength, self-sacrifice and kindness”.

The Metro calls it “Lockdown Number 3”, explaining that it’s now “against the law” to leave home other than for essential reasons – in fact, England’s new rules only become law early on Wednesday.

The Financial Times says Mr Johnson’s “sharp switch in position” has resulted in “the immediate closure” of all schools until mid-February.

The Guardian reminds readers that it was just hours since the prime minister urged millions of pupils to return to classrooms – but they now have to switch to online learning. It highlights Mr Johnson’s admission that parents would “reasonably ask why we did not make this decision sooner”.

The Daily Express describes the new lockdown as “tough” but says 13 million people are set to be vaccinated “in weeks”, declaring that the vaccine “will end the struggle”.

The i newspaper says shielding has been reintroduced as Mr Johnson “bows to scientific advisers”, and the PM believes that by mid-February – “if things go well” – all care home residents, carers, over-70s, frontline medics, social care workers and clinically vulnerable people should be vaccinated.

The Times describes the plan as a “race against time”, while the Sun calls for “one last push” following the decision to “shut Britain again” – quoting the PM’s words that “we are entering the last phase of the struggle”.

The Daily Star pokes fun at Mr Johnson’s indecisiveness – super-imposing his face onto the Little Britain character, Vicky Pollard, and splashing her “yeh but no but yeh” catchphrase over its front page.

The paper says the prime minister “finally made up his mind” to put the country into lockdown and shut classrooms, just a day after assuring the nation that schools were safe.

The Daily Telegraph’s “Matt” cartoon pictures an elderly man gazing out of the window of his living room, saying: “Now a ghastly South African strain of Covid and EVEN tougher restrictions. God, I miss 2020!”

Meanwhile, the PM’s decision-making – or therein lack of – is fair game for many of the papers’ editorial and comment pieces.

For the Guardian, John Crace accuses the prime minister of being “pathologically unable to make the right calls at the right time”, and his indecision, he says, costs lives. The sketch writer believes that “like clockwork”, the government does “what most reasonable people would have done” several weeks earlier.

And in the i, Oliver Duff claims that Covid-19 “thrives on indecision”. He thinks teachers, students and parents are justified in feeling angry about what he says was Mr Johnson’s “amateurish” decision to urge pupils to return to schools across the country, only to close them hours later.

But the Telegraph’s editorial praises Mr Johnson for being “commendably reluctant” to put the country “into hibernation” – and the inevitable negative knock-on effects – arguing that earlier lockdowns in other parts of the UK and other countries have “made no difference”.