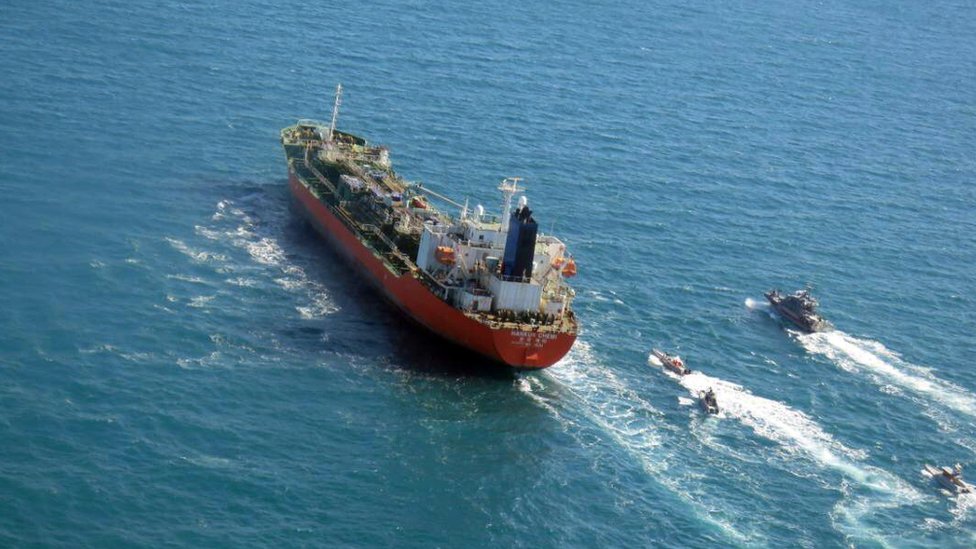 A South Korean warship with anti-piracy soldiers on board is moving towards the Strait of Hormuz, close to where a South Korean oil tanker was seized by Iran’s Revolutionary Guards.

South Korean officials say the mission is to ensure the safety of their nationals on board the captured vessel.

They say they are making diplomatic efforts to release the ship.

Iran seized the MT Hankuk Chemi and its crew of 20 on Monday saying the ship had violated environmental rules.

The incident comes amid tensions over Iranian funds frozen in South Korean banks because of US sanctions.

The South Korean foreign ministry said on Tuesday that it would send a government delegation to Iran “at the earliest opportunity” to try to negotiate the release of the ship.

A previously arranged visit by Vice-Foreign Minister Choi Jong-kun early next week will still go ahead, a spokesman added.

Foreign Minister Kang Kyung-wha declined to speculate on reports that Iran seized the ship to try to pressure Seoul into unlocking Iranian assets.

“We need to verify the facts first and ensure the safety of our crew,” she told reporters. “We are making diplomatic efforts for an early release.”

On Tuesday South Korea’s defence ministry said a destroyer carrying an anti-piracy unit was in waters close to the Strait of Hormuz – a narrow shipping route in the Gulf region – to “ensure the safety” of South Korean nationals.

The warship has been in waters off Somalia since late last year to counter piracy attacks in the Gulf of Aden and the Strait of Hormuz, Yonhap news agency reported.

In a statement, Iran’s foreign ministry spokesman said the tanker’s seizure was over a “purely technical issue and due to polluting the sea”.

The ship’s operator has denied that the vessel was polluting waters.

An Iranian government spokesman strongly denied any suggestions that the seizure was a form of “hostage-taking” linked to Iranian funds being held by South Korea.

“We’ve become used to such allegations … but if there is any hostage-taking, it is Korea’s government that is holding $7bn (£5bn) which belongs to us,” Ali Rabiei told reporters at a news conference.

The incident marks the first Iranian seizure of a major vessel in more than a year.