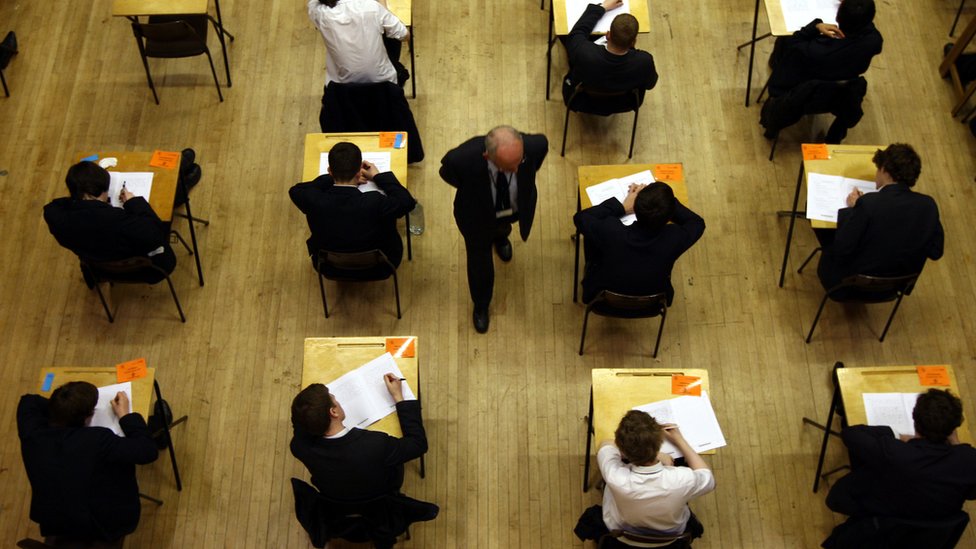 Publishedduration57 minutes agoimage copyrightPA Mediaimage captionCabinet Office minister Michael Gove said the replacement for exams needed to be “as fair as possible”The government closed schools in England with “the heaviest of hearts”, Cabinet Office minister Michael Gove said, as he confirmed this year’s GCSE and A-level exams have been cancelled.The decision was made after the…

The government closed schools in England with “the heaviest of hearts”, Cabinet Office minister Michael Gove said, as he confirmed this year’s GCSE and A-level exams have been cancelled.

The decision was made after the UK’s chief medical officers recommended a move to Covid threat level five.

Mr Gove said teacher-led assessments would have to be used and efforts would be made to ensure grades are fair.

However, there are growing calls for vocational exams to be cancelled.

Many BTecs and technical exams are due to take place in the coming days, but head teachers and college leaders say it would be impossible to hold them and unfair to candidates.

All primary and secondary schools are closed to pupils, except for vulnerable children and the children of key workers, for the next six weeks. Teaching will continue remotely.

But nurseries and early years settings are being told to remain open. Providers says they are concerned about the risk to staff and the wider community.

One head teacher, Neil Strowger from Bohunt School in Hampshire, said he was “bitterly disappointed and quite upset” for students who have suffered so much disruption this year and “fearful” about what it would mean for them.

Another head teacher Evelyn Ford, of Copthall School in north London, said school leaders had been working hard over Christmas and this week to roll out mass testing and now had to shift their focus to provide lessons remotely for the next six weeks.

And, despite the government saying vocational exams such as BTec should go ahead, with some scheduled for this week, the Association of School and College Leaders said that seemed “pretty impossible”.

On Sunday Boris Johnson said he had “no doubt” that schools were safe, and urged parents to send their children to primary schools if they were open.

But when he announced the latest lockdown on Monday the prime minister said “schools may nonetheless act as vectors” transmitting the virus into the community.

Father-of-four, Glen, told the BBC he was angry at having to now juggle home schooling with working from home.

“This is something that everyone has known for a long time.”

Another mother, Camille Barbagallo, said parents “should not have to be in this position”.

Another father, Emeka, was resigned to the situation, saying: “It’s a sacrifice we have to make. We take it on the chin for the country.”

Former head of Ofsted, Sir Michael Wilshaw, told BBC Radio 4’s World at One programme, he did not think the education department “was being led well at the moment”.

“If you talk to head teachers…they lack confidence in the leadership they’re receiving,” he said, adding that Education Secretary Gavin Williamson should “take final accountability for what’s gone on”.

Mr Gove said the “clear advice” to move to the highest level of Covid alert – level five – only came on Monday, the day most primary schools returned after Christmas.

Mr Gove – whose daughter is in her A-level year and whose son is studying GCSEs – said he shared the concerns of parents and head teachers about the impact of cancelling exams.

He said the Department for Education was in talks with exam regulator Ofqual to find the “the best and most effective way” to assess students, after widespread protests over grades awarded by an algorithm last summer were then re-issued.

Education secretary Gavin Williamson is expected to make a statement on the cancellation of exams in Wednesday, but it is understood that work is ongoing to plan for what will replace them.

Summer exams were cancelled weeks ago on Scotland and Wales, with a range of methods of internal school assessment to be used instead to judge pupils’ progress. Some exams are due to go ahead in Northern Ireland.

Analysis: ‘The only lever left to pull’

It was the step the government said it would never take – closing schools again in England to all but a small number of children.

Again and again we were told education was the priority and schools would remain fully open.

The Department for Education stood firm against a crescendo of calls for a circuit-breaker during the October half-term, then against an early holiday in December.

But the attendance figures were showing week after week how the virus was impacting on pupils’ ability to show up.

For a while, mass testing of pupils seemed to be the answer, but the short time available for head teachers to set this up made it a non-starter.

In the end it was the pressure on the NHS, caused by the new, more contagious variant of coronavirus, which sounded the closing bell for schools.

To shut them was the only lever government had left to pull to try to turn the tanker as a new tide of Covid cases began sweeping the nation.

Geoff Barton, general secretary of the Association of School and College Leaders, told BBC Breakfast he doubted vocational exams could go ahead this week as the government intends.

Students listening to the prime minister’s message on Monday, he said, may well be confused about whether they should attend their exams.

Mr Barton said: “It feels to me pretty impossible that you could be running those exams this week even though we would have wanted them to run, because you are just going to increase the unfairness of some young people being there, some not being there.”

And the Association of Colleges, which represents further education colleges where many exams are due to be taken, has written to the government calling for vocational and technical exams to be cancelled “without delay”.

It also argued there may be difficulties in finding invigilators to actually run the exams.

And nursery providers are questioning how it can be safe to open early years settings, but not schools.

Neil Leitch, chief executive of Early Years Alliance, said: “Many of those working in the early years feel terrified and abandoned by the government. They are being asked to remain on the frontline during the most worrying period of a global pandemic with no PPE, no testing and no access to vaccinations.”

She said: “A lot of pupils still don’t have laptops. They are surviving on broken phones – those children now need to be seen as a priority to get into the classroom and deemed to be a vulnerable child.”

It is understood Ofsted inspectors may be asked to monitor how well schools are providing remote learning.

Technology companies and broadband providers needed to “step up” and address the cost of data for remote learning, which was another obstacle for some families, Ms Longfield said.

How will you be affected by the latest developments? Share your experiences by emailing haveyoursay@bbc.co.uk.