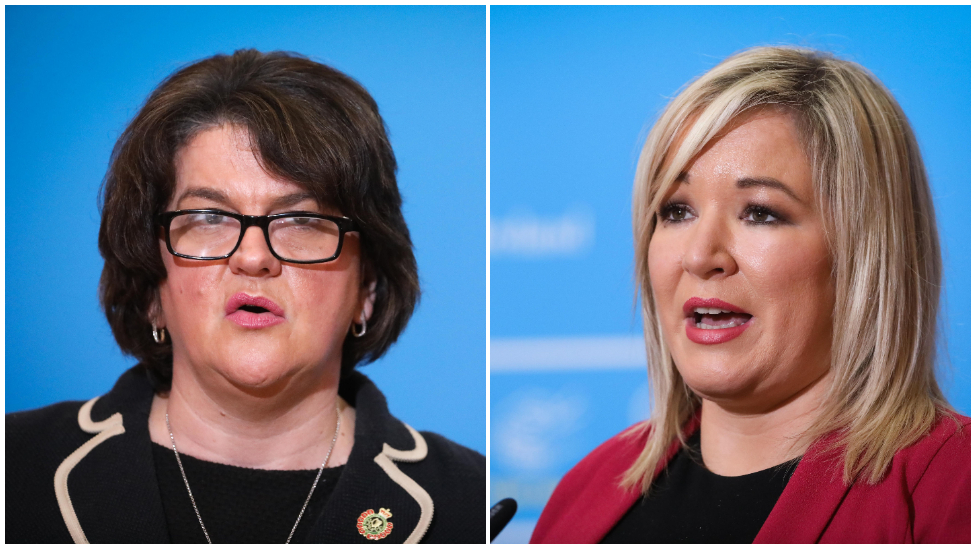 Stormont ministers have warned that more steps must be taken urgently to address the coronavirus situation in Northern Ireland.

The Stormont Executive has been meeting to discuss further possible coronavirus restrictions.

In England, all schools and colleges will close to most pupils and switch to remote learning until the middle of February.

The prime minister said that the devolved administrations shared his conviction that that this is a “pivotal moment”.

First Minister Arlene Foster said she regretted the situation, but that “more action” was necessary.

While Chief Medical Officer Dr Michael McBride said NI was “not in a good place”.

The first and deputy first ministers took part in a four-nations call on Monday evening, ahead of the virtual executive meeting.

Northern Ireland was placed into a six-week lockdown on 26 December, which saw all but essential shops forced to close.

People are being urged to stay at home as much as possible – but the message has not been made legally enforceable.

On Monday, the Department of Health reported that a further 1,801 people had tested positive for the virus in the past 24 hours.

There have also been 12 more Covid-19 related deaths.

In the Republic of Ireland on Monday, an additional 6,110 confirmed cases of Covid-19 were announced, with six further deaths linked to the virus.

The Irish government is considering a proposal to close schools for the rest of January.

‘Think back to last March’

Mrs Foster said the executive had “difficult decisions” to take on Monday night.

She said she was “disappointed” that some people had not followed the guidance over Christmas.

“Certainly I had hoped we weren’t going to be in this place, we had said none of this was inevitable but we’ve seen evidence of gatherings over Christmas – just today I was sent images of Portstewart and Portrush, and there were huge crowds gathering together and we have very difficult decisions to take as a result of that,” she said.

“If we do need to close schools as we did in March, I will deeply regret that – but we will do whatever is needed in relation to evidence that is in front of us.”

Mrs Foster said the executive would also engage with the PSNI in the coming hours to see what “more can be done in relation to compliance”.

She added that toughening up the stay at home message with legal force was one of many issues ministers would consider, in line with advice from health officials.

Deputy First Minister Michelle O’Neill said it was “important” that the executive moved to put the stay-at-home message back into law, as Scotland has done.

“We’re back in the space we faced in March, but the difference now is that this is happening, back then people were thinking this would be the worst-case scenario,” she said.

“We now all need to think back to how we felt in March.

“It’s important we put that message back into law because that is the only way you can enforce it – we are sitting with an alarming rise in cases.”

These latest figures from the Department of Health bring the total number of deaths to 1,366, while 79,873 people have tested positive for the virus since the pandemic started.

More than 12,000 cases have been reported in the past seven days, more than double the week before.

Medical experts believe that is down to the two-week easing of restrictions over the Christmas period.

Scotland’s First Minister Nicola Sturgeon has already announced a fresh lockdown there from midnight, with schools closed until February.

“Our health service is likely to face the most severe pressures it has seen to date in the coming weeks.”

“Now is not the time to duck or to dodge or to find a way around the restrictions,” he said, stressing there were “not too many” measures left for the executive to consider.

On Thursday 31 December, Northern Ireland’s Education Minister Peter Weir announced a staggered return to school for pupils during the month of January.

Most primary school pupils will not return to the classroom until Monday 11 January.

The first transfer test, used by many grammar schools to select pupils, is due to take place on Saturday but there have been calls from some teaching unions and political parties for the test to be cancelled this year, in light of the uncertainty with the pandemic.

Up to 11,000 people aged over 80 across Northern Ireland are set to receive the this week, with some of the first doses delivered at a GP surgery on the Falls Road in West Belfast on Monday afternoon.

The SDLP has called for the assembly to be recalled on Tuesday to discuss the rolling out of the vaccine.

It can be recalled if at least 30 MLAs sign a petition.

On Monday, Justice Minister Naomi Long welcomed the opening of Northern Ireland’s first Nightingale venue, which will be used for courts and tribunals business.

The facility was approved by a meeting of the executive on 17 December, and will sit in the International Convention Centre in Belfast (ICC).

Activity at the centre will be phased in, in line with Covid-19 regulations.

In other coronavirus-related developments on Monday: