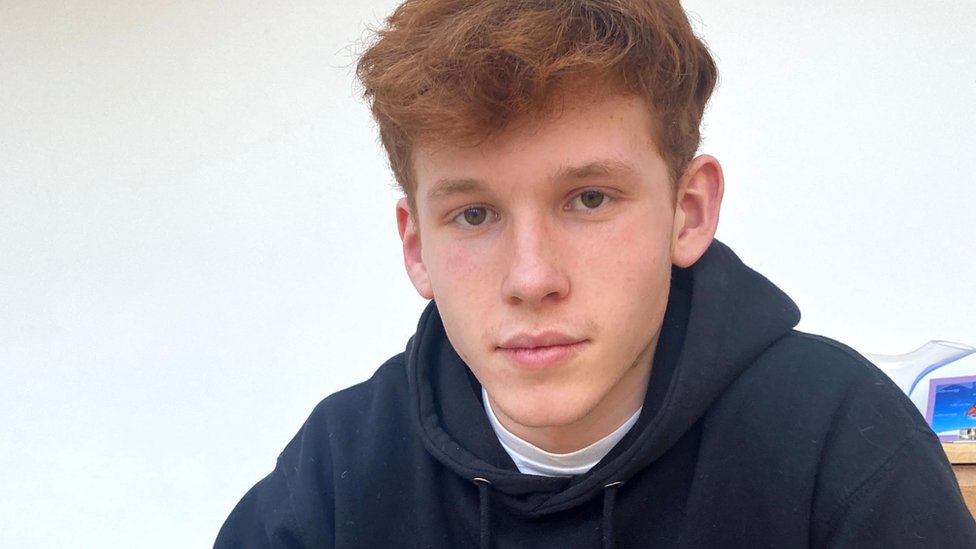 By Katherine SellgrenFamily & Education reporterPublishedduration20 minutes agoimage captionJake did not want exams to be cancelled”It’s a big disappointment,” says 17-year-old Jake from Buckinghamshire, following the news that this summer’s A-levels have been cancelled.”The first thing I thought was, ‘What am I going to do?'”I was calling my friends – everyone was just as shocked…

“It’s a big disappointment,” says 17-year-old Jake from Buckinghamshire, following the news that this summer’s A-levels have been cancelled.

“The first thing I thought was, ‘What am I going to do?’

“I was calling my friends – everyone was just as shocked as I was, knowing that this is a big change that could affect our futures.”

Jake has been studying for A-levels in physics, maths and chemistry and plans to do a year’s internship with the Army before going on to do a physics degree.

He feels that he, and many others, will now not be able to reach their full potential, particularly if their predicted grades are not what they had hoped for.

“I have been working a lot harder and I feel I can do better in my exams, but I feel like I’m not going to get that chance now.

“And because we’re going to be spending less time in school, I know over a zoom lesson it’s going to be a lot harder for me to show teachers that I can do a lot better.”

“I remember watching [Education Secretary] Gavin Williamson in Parliament a month ago say ‘We’re not going to let Covid damage the life chances of students by cancelling exams’.

“I believed what he said and I thought that here was someone looking out for me, but now the complete opposite has happened.”

He added: “There is a sense of anger, a sense of being let down. I feel like the government isn’t looking out for me.”

But not exams have been cancelled – BTec qualifications are still going ahead at this stage.

Eighteen-year-old BTec student Joe, from Beaconsfield, is annoyed that his exams have not been cancelled and says it is not right that A-level students are likely to be get predicted grades, while BTec students will not.

His mother, Sharon, adds: “They will be competing for the same university places but will have completely different methods of examination.”

‘We did it before, we’ll do it again’

The news of further disruption to education due to school closures has impacted families too.

Mother-of-two Victoria Slatter told the BBC she was “gutted and heart-broken” that children were facing “yet more disruption” to their education.

“It’s not just the educational side of school, it’s the social interaction, it’s seeing their friends, it’s the routine and the structure of being in the school environment that they miss.

“My two children really struggled during the first lockdown with that element.”

Commenting on the BBC’s Education and Family Facebook pages, many parents said they were processing Monday night’s announcement that schools will be closed to the majority of pupils.

Emma Nice said: “There will be no learning or otherwise in our house this morning.

“I need to work out how I’m going to juggle my job and my children’s learning again, so I’ve declared an inset day for us today while I sort it out.

“100% agree schools should close, but it does make it rather stressful when you have to work four days a week while having to support Year 5 and Year 8 children.

“School work has been well prepared and delivered by both my children’s schools – primary and secondary – and they have both happily completed the work set.”

But Cristina Raigada said: “Home-schooling will be much harder now in winter. Poor kids – school is not childcare, but they miss their friends, the interaction.”

Children ‘will be harmed’

The parents’ group, Us for Them, said it was “really disappointed” by the government’s decision to shut schools.

“There are approximately 10 million children in this country and each one of them will be harmed by this decision.”

The parents’ group Sept for School is concerned about the “huge challenge” that remote learning poses for parents and says it should be kept to a minimum.

“When we asked parents in July 2020 ‘How has home-schooling been for you?’ many were stressed, exhausted and angry,” said co-founder Fiona Forbes.

She said that when schools closed in March 2020, the majority of pupils did not go back into the classroom for six months.

“That simply cannot be allowed to happen this time.

“Government needs to work collaboratively with the sector to find a way to safely reopen schools and education must be prioritised when lockdown eases.

“We cannot be in a position again where you can go to the pub and to Primark but our children can’t go to school.”

How will you be affected by the latest developments? Share your experiences by emailing haveyoursay@bbc.co.uk.