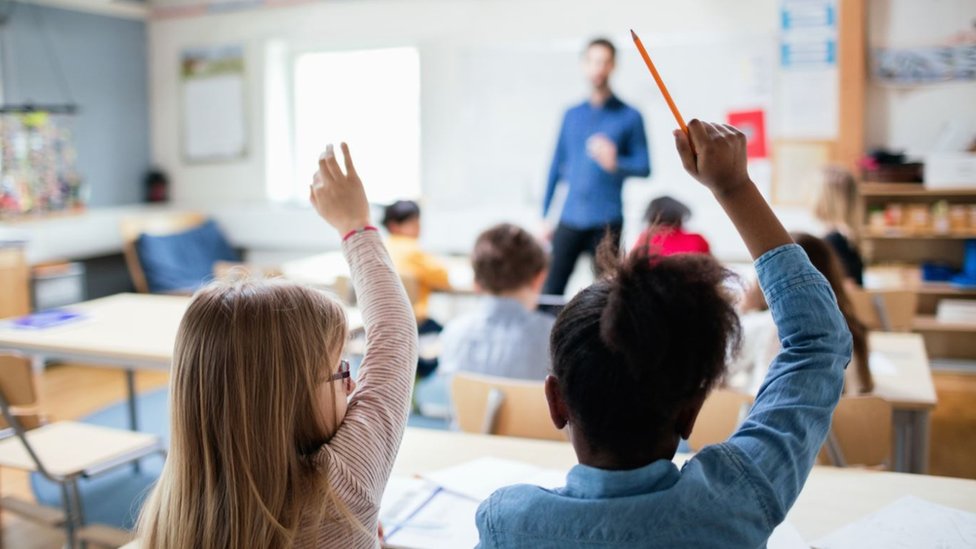 By Sean CoughlanBBC News family and education correspondentPublishedduration30 minutes agoimage copyrightGetty Imagesimage captionUnions have advised teachers it is unsafe to go into schools as coronavirus cases rise across the countryMany of England’s primary schools are opening on Monday, with rows continuing over whether pupils should return with the current Covid restrictions.There is also uncertainty over…

Many of England’s primary schools are opening on Monday, with rows continuing over whether pupils should return with the current Covid restrictions.

There is also uncertainty over how many classes could be closed after advice from a teachers’ union that it is not safe for staff to be in school.

Head teachers warned of a “confusing picture” for parents and schools.

The Department for Education said switching to online teaching should be a “last resort”.

Adding to the uncertainty, some individual local authorities have raised concerns about reopening.

But Prime Minister Boris Johnson has urged parents to send their children to school, saying the risk was “very, very low”.

If schools are closed, Labour shadow chancellor Anneliese Dodds has called for support for parents unable to work because of childcare problems.

“It’s very hard to tell how many school buildings will be open,” said Paul Whiteman, leader of the National Association of Head Teachers.

But he said heads would do “everything they can to provide the maximum provision that their circumstances allow”.

Secondary schools are staying closed this week except for vulnerable and key workers’ children – and in local authorities with high levels of coronavirus, including across London, primary schools are also not open to most pupils.

But reopening primary schools in other areas, including for some in Tier 4, has been challenged, with the biggest teachers’ union, the National Education Union, calling for teaching to be moved online for the first two weeks of term.

The NEU has advised teachers they could tell head teachers they will be working from home on safety grounds – with the union saying a letter for teachers to give to schools has been downloaded more than 5,000 times.

Any school closures should be kept to an “absolute minimum”, said Amanda Spielman, head of the Ofsted education watchdog, because “children’s lives can’t just be put on hold while we wait for vaccination programmes”.

‘Reviewed in next few days’

There have been doubts about reopening schools raised by some local authorities.

Southampton’s council says if schools do not have enough staff they should prioritise opening for vulnerable and key worker children – and they will not apply truancy fines to families who keep their children at home.

In Wolverhampton, Newcastle and Birmingham schools have been told the council would support a decision to not reopen fully.

Kent County Council has called for a delay in reopening primary schools in four parts of the county – while other areas in the county are closed to most pupils.

But a message on Twitter from the Conservative MP for Folkestone and Hythe, Damian Collins, suggested further changes were on the way.

After a meeting with School Standards Minister Nick Gibb, Mr Collins said the “decision about which schools will be required to stay open will be reviewed in the next few days by the Department for Education”.

But he says schools have struggled with late decision-making and a lack of “clarity” at national level.

“It has been incredibly difficult to make these decisions and communicate them in a tiny timeframe and within a holiday,” says Mr Sheppard.

Julian Rose, head of West Chiltington School in West Sussex, has an inset day on Monday and is then expecting to open on Tuesday.

He says “some very anxious” parents have been in touch about children going back when the area is in Tier 4.

“I think many feel astonished that we are still open when operating under Tier 4,” says Mr Rose.

And he says the school will “not have a full complement of staff in attendance”.

A Department for Education spokesman said: “Children’s education has consistently been a national priority, which is why we want classrooms to reopen wherever possible in the new term.

“Schools will continue to implement appropriate safety measures to help mitigate the risk of transmission.”