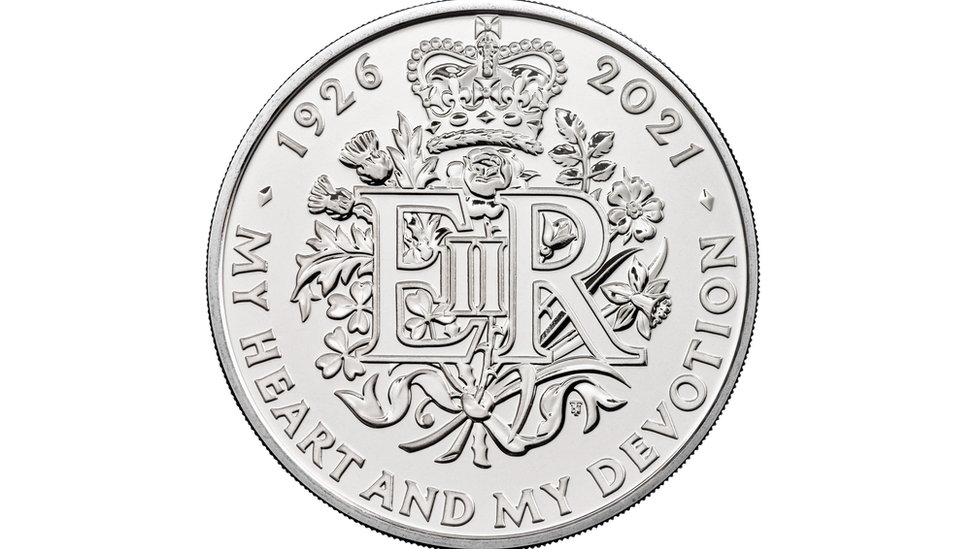 Publishedduration19 minutes agoimage copyrightThe Royal Mint/PA MediaThe Queen’s 95th birthday will be commemorated on one of five new coins released this year, the Royal Mint has announced.The 2021 British coin collection will also mark the 250th anniversary of the birth of novelist Sir Walter Scott, and the 75th anniversary of the death of author HG…

The Queen’s 95th birthday will be commemorated on one of five new coins released this year, the Royal Mint has announced.

The release of a £5 coin is typically reserved for significant royal events.

In April the Queen will become the first UK monarch to reach 95.

The new £5 coin depicts the royal cypher “EIIR”, above the words “my heart and my devotion”, a nod to part of her 1957 Christmas broadcast, which was the first to be televised.

During that speech, the Queen told the nation: “In the old days the monarch led his soldiers on the battlefield and his leadership at all times was close and personal.

“Today things are very different. I cannot lead you into battle, I do not give you laws or administer justice, but I can do something else, I can give you my heart and my devotion to these old islands and to all the peoples of our brotherhood of nations.”

The anniversary of the birth of Sir Walter Scott, who wrote the novels Waverley, Rob Roy and Ivanhoe and is considered one of Scotland’s most famous figures, will be celebrated with a £2 coin.

The 75th anniversary of the death of science fiction author HG Wells, who penned works such as The Time Machine and The War Of The Worlds, will also be marked on a £2 coin, with a depiction of images from his novels.

The 50th anniversary of decimalisation, when Britain’s modern coins came into force, will be featured on a 50p coin.

The 75th anniversary of the death of the inventor John Logie Baird, famous for his early prototypes of the television, will be commemorated on another new 50p coin.

As the Queen’s head already appears on one side of all coins in circulation, these five coins will each offer a different depiction from the various stages of her reign.

Clare Maclennan, of the consumer division at the Royal Mint, said this year’s commemorative coins marked “some of the biggest anniversaries in 2021”, with each coin “a miniature work of art” designed as “a treasured keepsake or gift”.

The commemorative set will be available to purchase from the Royal Mint website.