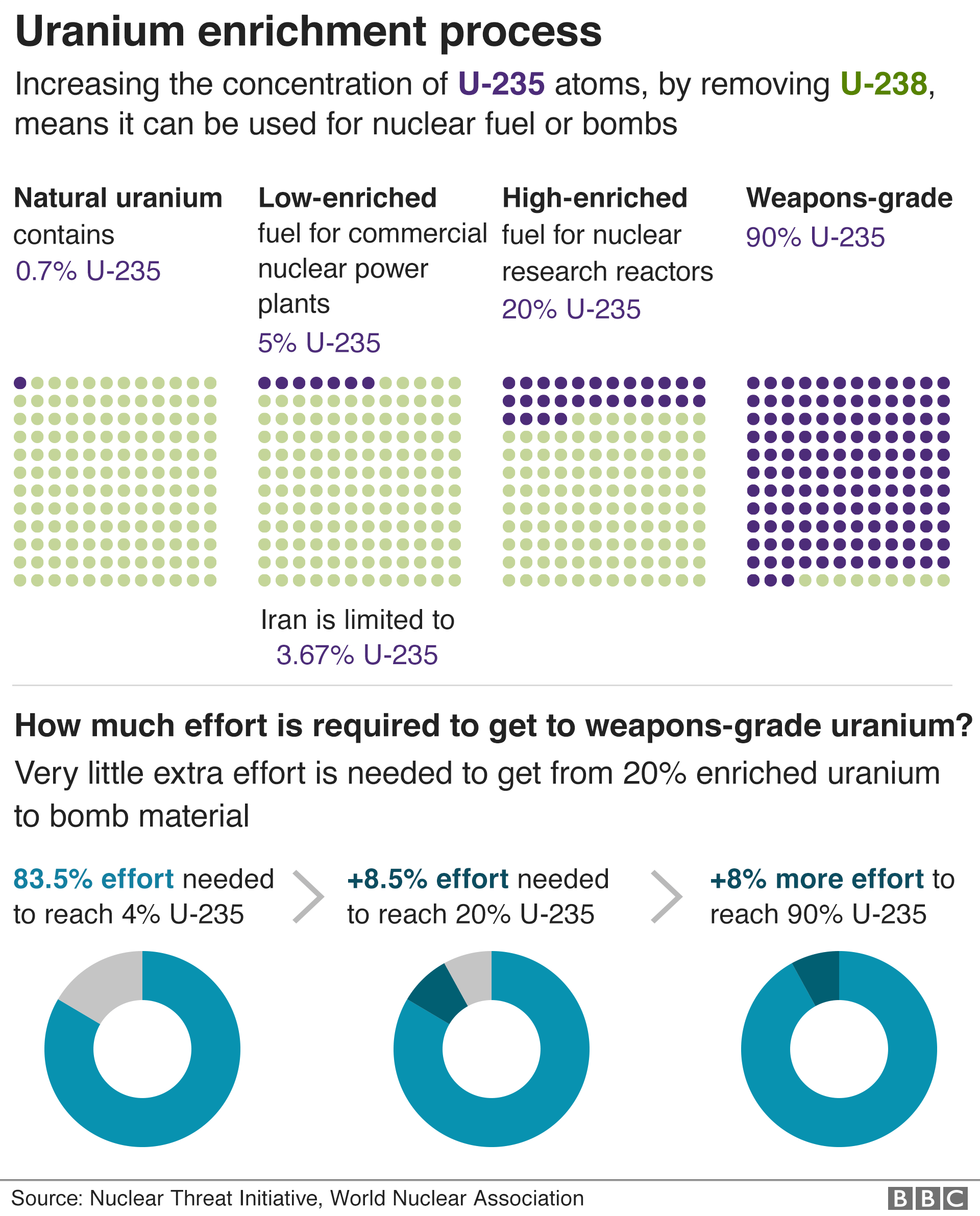 Publishedduration24 minutes agoimage copyrightEPAimage captionIran says it suspended its nuclear commitments in response to reinstated US sanctionsIran has resumed enriching uranium to 20% purity, in its most significant breach yet of the 2015 nuclear deal with world powers.The global nuclear watchdog confirmed that the process had begun at the underground Fordo plant on Monday.Enriched uranium…

Iran has resumed enriching uranium to 20% purity, in its most significant breach yet of the 2015 nuclear deal with world powers.

The global nuclear watchdog confirmed that the process had begun at the underground Fordo plant on Monday.

Iran, which insists that its nuclear programme is peaceful, has rolled back a number of commitments under the deal.

It has said it is retaliating for the US economic sanctions that were reinstated in 2018 by President Donald Trump when he abandoned the accord, also known as the Joint Comprehensive Plan of Action (JCPOA).

But Israeli Prime Minister Benjamin Netanyahu said Iran’s decision “can’t be explained in any way except as continued realisation of its intention to develop a military nuclear programme”.

“Israel will not allow Iran to manufacture nuclear weapons,” he added.

In a separate development, Iran’s Revolutionary Guards said they had seized a South Korean-flagged chemical tanker in the Gulf “due to the repeated infringement of maritime environmental laws”.

South Korea’s foreign ministry demanded its immediate release of the Hankuk Chemi and said a South Korean anti-piracy unit stationed in the Strait of Hormuz had been dispatched to the area.

President Hassan Rouhani had ordered the move because he was “bound” by a new law requiring the production and storage of at least 120kg (265lbs) of 20%-enriched uranium annually for peaceful purposes, he said.

“Iran today began feeding uranium already enriched up to 4.1% U-235 into six centrifuge cascades at the Fordo Fuel Enrichment Plant for further enrichment up to 20%,” a statement said.

What is enriched uranium?

Enriched uranium is produced by feeding uranium hexafluoride gas into centrifuges to separate out the most suitable isotope for nuclear fission, called U-235.

Low-enriched uranium, which typically has a 3-5% purity of U-235, can be used to produce fuel for commercial nuclear power plants.

Highly enriched uranium has a concentration of 20% or more and is used in research reactors.

Under the nuclear deal, Iran was allowed to enrich uranium only up to a 3.67% purity; to stockpile no more than 300kg (660lbs) of the material; to operate no more than 5,060 of its oldest and least efficient centrifuges; and was required to cease enrichment at Fordo altogether.

But Iran has taken steps to “reduce” those commitments since Mr Trump reinstated US sanctions to compel it to negotiate a replacement of an agreement he said was “defective at its core”.

Iranian Foreign Minister Mohammad Javad Zarif stressed on Monday that the measures were “fully reversible upon full compliance by all” parties.

US President-elect Joe Biden, who will take office on 20 January, has said he will consider rejoining the nuclear deal so long as Iran returns to full compliance and commits to further negotiations.

But the latest move by Iran could hinder a bid by Mr Biden to re-enter the agreement.

Why is 20% purity significant?

They also warned that the production of highly enriched uranium would pose a more serious near-term proliferation risk.

That is because going from uranium’s natural state of 0.7% concentration of U-235 to 20% takes about 90% of the total effort required to get to weapons-grade.

Before the nuclear deal, Iran had a sufficient amount of 20%-enriched uranium and number of centrifuges that its “break-out time” was estimated to be about two to three months.

The agreement slowed the “break-out time” to at least a year.