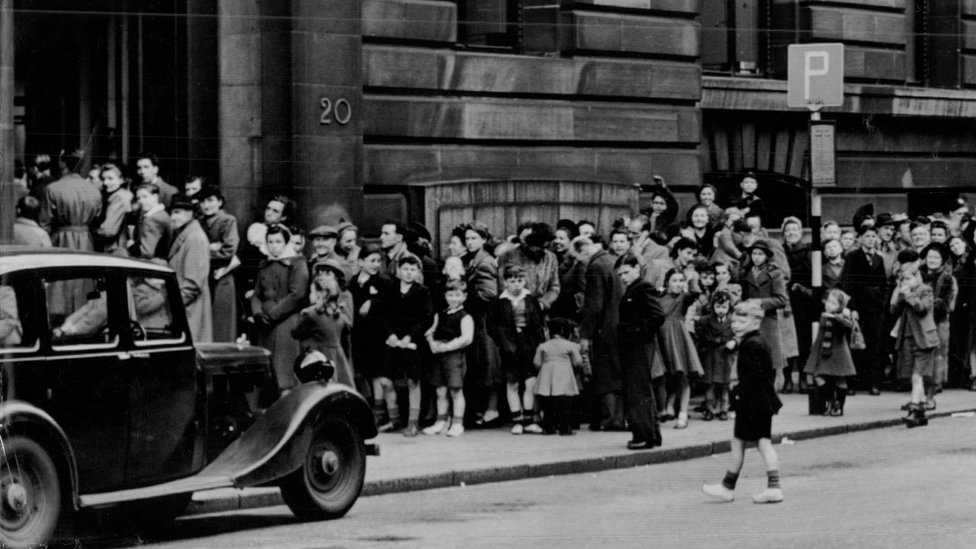 By Andrew PickenBBC Scotland NewsPublishedduration14 minutes agoimage copyrightShutterstockimage captionQueues outside the Public Health Department in Cochrane Street, Glasgow in April, 1950The fourth day of 2021 marks the start of a mass vaccination campaign like no other. Today is about halting Covid-19, but in the middle of the last century an inoculation programme became the weapon…

The fourth day of 2021 marks the start of a mass vaccination campaign like no other. Today is about halting Covid-19, but in the middle of the last century an inoculation programme became the weapon against another deadly virus.

The long line of people outside the health centre wait patiently for their turn to be vaccinated.

Special clinics are getting through 600 jabs an hour but the queues are not getting any shorter.

Meanwhile, public health officials are desperately trying to trace anyone who has come into contact with those carrying a deadly virus.

It may sound familiar but this is in fact the picture in Glasgow in the grip of a smallpox outbreak in 1950.

As Scotland begins the mass rollout of the Oxford AstraZeneca vaccine, the country has had previous experience of preventing infection from deadly viruses.

Smallpox has now been eradicated but its characteristic rash used to be feared throughout the world with estimates that 300 million people died from the disease in the 20th Century alone.

In the post-war period serious outbreaks were still rare but that changed in March 1950 when Indian sailor Mussa Ali arrived in Glasgow.

Mr Ali was admitted to an infectious diseases hospital in the city’s Knightswood area with pneumonia and suspected chickenpox.

It was subsequently found that Mr Ali had smallpox and was the source of an outbreak that would eventually infect 19 people and kill six.

The dead included a doctor, four nurses and a laundry maid, all of whom had some direct contact with Mr Ali in hospital.

Crucially, none of those who died had been vaccinated against smallpox and fears over the potential scale of the outbreak sparked a major response from public health officials. And the kind of moves they undertook back then have striking parallels some 70 years on.

Visiting was immediately banned at 200 hospitals across the country and a tracing system eventually tracked down 1,971 possible contacts of those who caught the disease.

These ranged from family members to bus conductors.

Suspected contacts were taken to their local hospitals for checks while their homes and clothes were disinfected.

However, the major focus was to get people vaccinated as quickly as possible. A total of seven emergency clinics were set up across Glasgow.

These centres were open 12 hours a day with the busiest injecting some 600 people an hour. The outbreak was front page news.

In the first 12 days an estimated 250,000 people were immunised in Glasgow and a total of 300,000 had the vaccine by the time the outbreak was declared over.

On Monday, vaccinators begin administering the first of the 44,000 Oxford Coronavirus jabs that have been sent to Scotland. Nearly 100,000 people have already received a dose of the first approved vaccine from Pfizer.

But it is the Oxford drug that is cheap to manufacture and, unlike the Pfizer one, can be stored in a domestic fridge – that is the key to quick and easy mass vaccination.

The queues of people outside health centres during the smallpox inoculations is unlikely to be repeated in this programme as people are to be given appointment times to get the jab.

GPs, pharmacists and optometrists are expected to be among more than 2,000 people on hand by the end of January to administer the vaccines.

A variety of locations will be used to host the special clinics with sessions likely to take place around the clock and at weekends.

Speaking to The Scotsman at the height of the smallpox crisis, the city’s medical officer of health, Dr Stuart Laidlaw, said: “The first wave is over, so far as I can see, but we just don’t know what the next wave is going to bring forth.”

The first person to die in the outbreak was Dr Janet Fleming, 29, from Hamilton who had been present when Mr Ali first presented at the hospital.

As a result of the doctor’s death, an immunisation programme was started in the South Lanarkshire town which saw more than three quarters of its 40,000 residents given the jab.

By 17 April, both Glasgow and Hamilton had been given the all clear and Dr Laidlaw told The Scotsman he was grateful to the public for having “acted very wisely”.

Other newspaper reports from the time said Mr Ali was cheered out of the hospital after he recovered.

The act of clapping discharged Covid patients – many of whom had spent weeks on mechanical ventilators in ICU – has been a feature of today’s pandemic.

Coronavirus peaked in mid-April last year, but hospital beds are being filled once more by those suffering the worst symptoms.

It is now hoped that a vaccination programme with the ambition, speed, public co-operation and organisation of the one in 1950s Glasgow will provide the answer to ending this pandemic in Scotland and beyond.