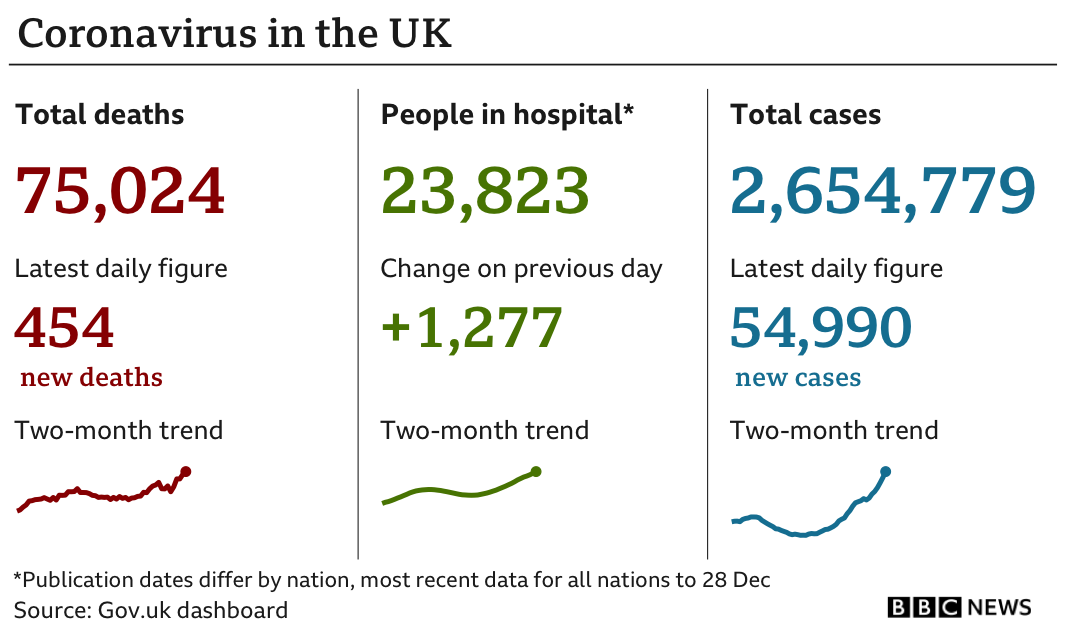 Publishedduration9 minutes agoimage copyrightPA Mediaimage captionBoris Johnson spoke during a visit to Chase Farm Hospital in north LondonBoris Johnson has said the government will announce “tougher measures” to prevent the spread of coronavirus “in due course”.He predicted “tough, tough” weeks to come, with more than three-quarters of England’s population already under the highest – tier…

Boris Johnson has said the government will announce “tougher measures” to prevent the spread of coronavirus “in due course”.

He predicted “tough, tough” weeks to come, with more than three-quarters of England’s population already under the highest – tier four – restrictions.

On Sunday, the UK recorded more than 50,000 new confirmed Covid cases for the sixth day in a row.

Labour is calling for new England-wide restrictions to come in immediately.

Leader Sir Keir Starmer also said it was “inevitable” more schools would have to close to lessen the spread of coronavirus.

Asked what further restrictions would be put in place, Mr Johnson said: “What we have been waiting for is to see the impact of the tier four measures on the virus and it is a bit unclear, still, at the moment.

“But if you look at the numbers, there is no question that we are going to have to take tougher measures and we will be announcing those in due course.”

He said the faster-spreading coronavirus variant that has developed in south-eastern England required “extra-special vigilance”.

But closing primary schools must remain a “last resort”, the prime minister added, saying the “risk to kids” was “very, very small”.

The prime minister was peaking during a visit to Chase Farm Hospital in north London to meet some of the first people to receive the Oxford vaccine,

An additional 454 deaths within 28 days of a positive test result were reported across the UK on Sunday, meaning the total by this measure is now above 75,000.

More than 500,000 doses of the Oxford-AstraZeneca Covid-19 vaccine are available for use, with the Pfizer BioNTech having been in use for almost a month.

A further 20 million people in England were added to the toughest – tier four – set of rules, on 31 December.

It means 78% of the population of England is now in tier four, under which non-essential shops are closed and people can only leave their homes for a certain number of reasons.

The Scottish government meets on Monday to consider “further action”, with all of mainland Scotland currently under its own level four restrictions – only some islands are under less stringent tier three measures.

Wales entered a nationwide lockdown on 20 December, while Northern Ireland is in the second week of a six-week lockdown that began on Boxing Day.

In another development, an academic has said there is a “big question mark” over whether a vaccine developed at Oxford University will be as effective against a new variant of the virus that has emerged in South Africa.

Prof Sir John Bell, Regius professor of medicine at the university, said the team there were currently investigating this question “right now”.

He added it was “unlikely” the variant would “turn off the effect of vaccines entirely,” and in any case it would be possible to tweak the vaccine in around four to six weeks.

But Matt Hancock told BBC Radio 4’s Today programme he was “incredibly worried” about the South African variant, saying: “This is a very, very significant problem.”

“We have shown that we are prepared to move incredibly quickly, within 24 hours if we think that is necessary, and we keep these things under review all the time,” added the health secretary.