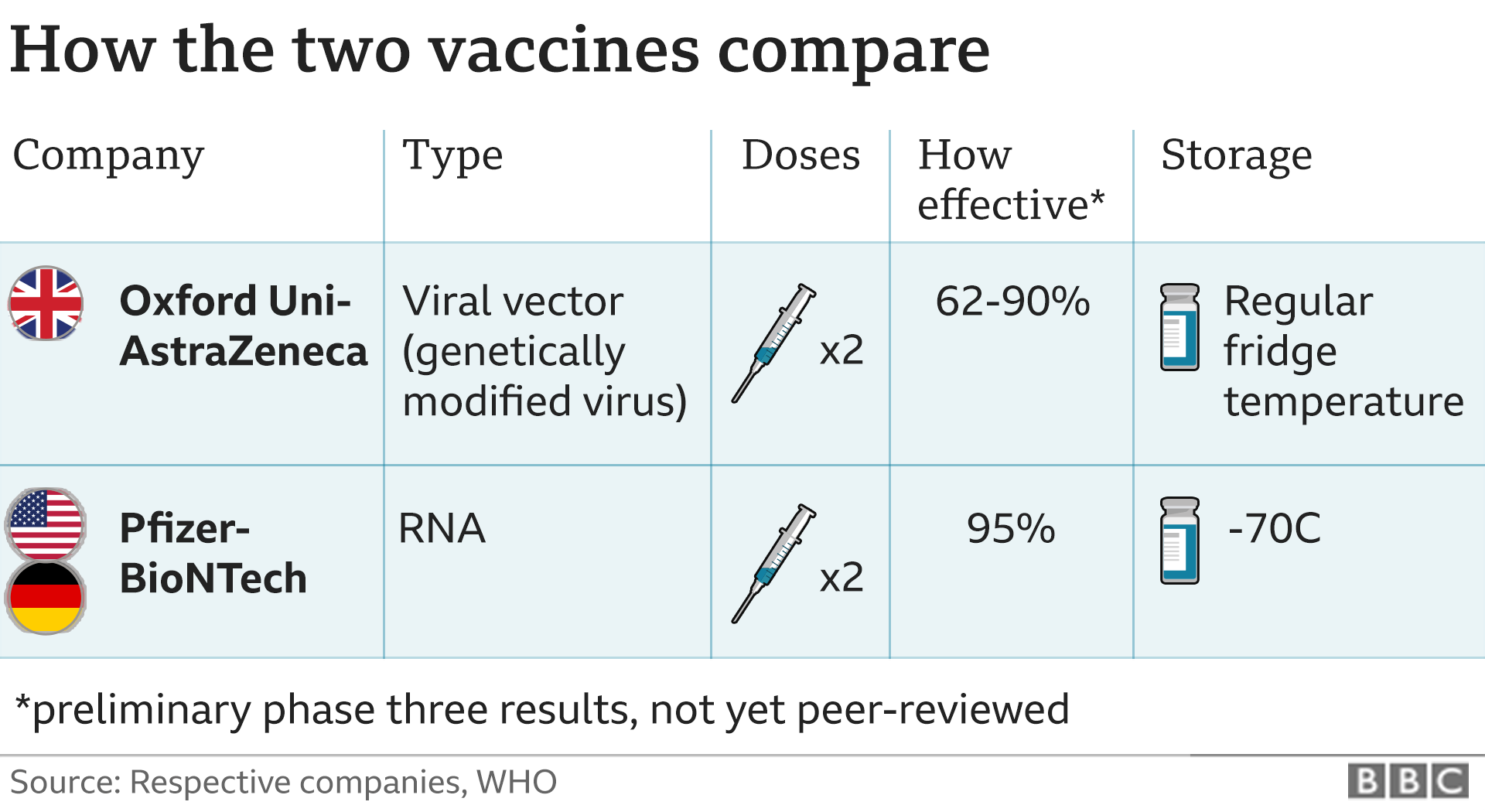 Publishedduration17 minutes agomedia caption82-year-old Brian Pinker is given the Oxford vaccine at the Churchill Hospital in OxfordDialysis patient Brian Pinker, 82, has become the first person to receive the Oxford-AstraZeneca Covid-19 vaccine.The retired maintenance manager got the jab at 7:30 GMT from nurse Sam Foster at Oxford’s Churchill Hospital.More than half a million doses of…

The retired maintenance manager got the jab at 7:30 GMT from nurse Sam Foster at Oxford’s Churchill Hospital.

More than half a million doses of the vaccine are ready for use on Monday.

Health Secretary Matt Hancock said it was a “pivotal moment” in the UK’s fight against the virus, as vaccines will help curb infections and then allow restrictions to be lifted.

But Prime Minister Boris Johnson warned on Monday there was “no question we will have to take tougher measures” as the UK struggles to control a new, fast-spreading variant of the virus.

Speaking during a visit to London’s Chase Farm Hospital, to meet some of the first people to receive the Oxford vaccine, he said there were “tough, tough” weeks to come and further restrictions will be announced “in due course”.

On Sunday more than 50,000 new confirmed Covid cases were recorded in the UK for the sixth day running, prompting Labour to call for a third national lockdown in England.

Northern Ireland and Wales currently have their own lockdowns in place, while Scottish cabinet ministers will meet later to consider further measures.

The rollout comes as rows continue over whether pupils should return to school with the current high levels of Covid infections.

Six hospital trusts – in Oxford, London, Sussex, Lancashire and Warwickshire – are administering the Oxford-AstraZeneca jab on Monday, with 530,000 doses ready for use.

Most other available doses will be sent to hundreds of GP-led services and care homes across the UK later in the week, according to the Department of Health and Social Care.

Mr Pinker, who has been having dialysis for kidney disease at the Churchill Hospital for a number of years, said he was “really proud” the vaccine was developed in Oxford.

“The nurses, doctors and staff today have all been brilliant and I can now really look forward to celebrating my 48th wedding anniversary with my wife Shirley later this year,” he said.

Music teacher and father-of-three Trevor Cowlett, 88, and Prof Andrew Pollard, a paediatrician working at the Oxford University Hospitals NHS Foundation Trust and lead investigator of the Oxford vaccine trial, were also among the first to be vaccinated.

Chief nurse Ms Foster, who administered the first dose, told the BBC it was a “huge privilege”, saying: “Every single patient that we have vaccinated over the last couple of weeks have got their own personal stories to the difference it’s going to make, so it is no different this morning.”

Mr Hancock told BBC Breakfast the Oxford vaccine rollout was a “pivotal moment” in the fight against coronavirus, saying: “It’s going to be a tough few weeks ahead, but this is the way out.”

Asked about reports potential volunteers were being deterred by the additional training and forms, Mr Hancock said they were going to “reduce the amount of bureaucracy”.

“For instance there’s one of the training programmes about how to tackle terrorism, I don’t think that’s necessary, we’re going to stop that,” he said.

England’s chief medical officer Chris Whitty said the vaccines “give us a route out in the medium term” but warned the NHS was “under considerable and rising pressure in the short term”.

As the recent rise in Covid cases puts increased pressure on the NHS, the UK has accelerated its vaccination rollout by planning to give both doses of the vaccine 12 weeks apart, having initially planned to leave 21 days between jabs.

The UK’s chief medical officers have defended the delay to second doses, saying getting more people vaccinated with the first jab “is much more preferable”.

Make no mistake, the UK is in a race against time.

That much is clear from the decision to delay the second dose of the vaccine to focus on giving as many people as possible their first doses.

So how fast can the NHS go? Ultimately it wants to get to two million doses a week.

That will not be achieved this week.

But Monday marks the start of the NHS putting the accelerator to the floor.

A rapid increase in the vaccination rate should follow.

But how quickly the UK can go is dependent on several complex processes.

First, the vaccine has to be manufactured, then it has to be put into vials and packaged up (known as fill and finish). After that each batch has to be checked and certified before being sent to NHS vaccination sites where there needs to be enough vaccinators and support staff to ensure those doses are given as quickly as possible.

Problems at any one stage can disrupt how quickly the vaccination programme can be rolled out.

While there are millions of doses of each vaccine in the country and a total of 140 million of both vaccines pre-ordered, there are currently just over one million – around 500,000 of each – ready to be given this week.

NHS medical director Professor Stephen Powis said: “The NHS’ biggest vaccination programme in history is off to a strong start, thanks to the tremendous efforts of NHS staff who have already delivered more than one million jabs.”

He said the Oxford vaccine rollout was “chalking up another world first that will protect thousands more over the coming weeks”.

The Pfizer-BioNTech vaccine was the first jab approved in the UK, and more than a million people have had their first one.

The first person to get the jab on 8 December, Margaret Keenan, has already had her second dose.

The Oxford jab – which was approved for use in late December – can be stored at normal fridge temperatures, making it easier to distribute and store than the Pfizer jab. It is also cheaper per dose.

The UK has secured 100 million doses of the Oxford-AstraZeneca vaccine, enough for most of the population.

Care home residents and staff, people aged over 80, and frontline NHS staff will be first to receive it.

GPs and local vaccination services have been asked to ensure every care home resident in their local area is vaccinated by the end of January, the Department of Health and Social Care said.

Some 730 vaccination sites have already been established across the UK, with the total set to surpass 1,000 later this week, the department added.