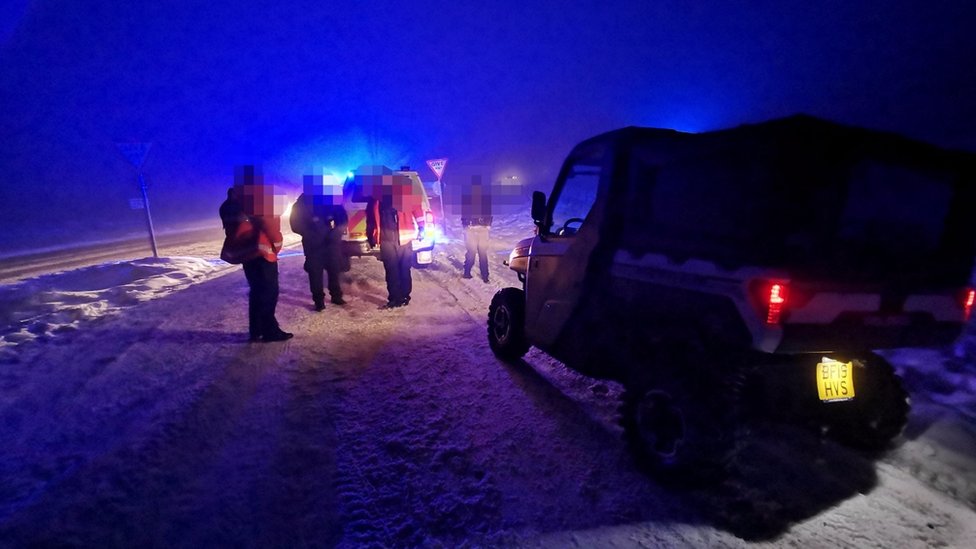 Publishedduration31 minutes agoimage copyrightCheshire Policeimage captionPolice rescued 22 people from the snow in Cheshire including a two-year-old childDozens of people, including a two-year-old child, had to be rescued when they became stranded on rural roads.Police and volunteers came to the aid of people whose vehicles were stuck in the Derbyshire Peak District on Saturday.There were…

Dozens of people, including a two-year-old child, had to be rescued when they became stranded on rural roads.

Police and volunteers came to the aid of people whose vehicles were stuck in the Derbyshire Peak District on Saturday.

There were similar scenes in Cheshire where 22 people, had to be rescued from stranded cars.

The wintry weather is set to continue with a Met Office warning for ice in the East Midlands and North East.

At around 20:00 GMT on Saturday, Derbyshire Police reported “sudden snow” had left dozens of vehicles and their occupants stranded in the Goyt Valley.

Some visitors to the area were caught off-guard by how quickly the weather changed.

Derbyshire Police posted on Twitter: “We are shuttling people back to Buxton as quickly as we can.

“Sit tight and we will get to you.”

The A57 Snake Pass – a road notorious for becoming dangerous in the snow – had been closed earlier in the day because of the weather.

In total 22 people, including eight children – the youngest of whom was two – were recovered from nine vehicles.

Cheshire Police Rural Crime Team said: “The snow had well and truly caught them all out on the back roads.

“We were three miles (4.8km) from the nearest village, and the light was fading on us quickly.

“It was decided to get everyone out of their cars and so began a mile walk in the snow.”

They were led to a nearly farm where they could be taken to safety in police vehicles.

The force was critical of the families for travelling into the area, that is under tier four coronavirus restrictions.

It said: “All except one car was from out of Cheshire. We had people from Sale, Stockport and Salford with the closest being Congleton.

“Sadly these people have put all of us at risk today.”