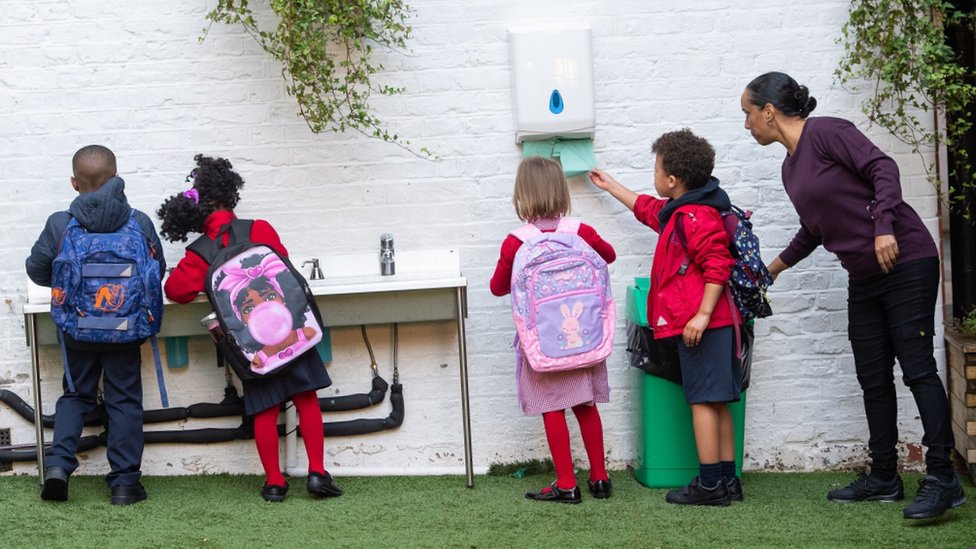 Publishedduration2 hours agoimage copyrightPA Wireimage captionTeaching unions are pressuring the government to keep all schools in England shut after the Christmas break, amid a surge in coronavirus casesClosing schools to tackle Covid puts children’s lives on hold and should be kept to an “absolute minimum”, the head of England’s schools watchdog has said.Ofsted chief inspector…

Closing schools to tackle Covid puts children’s lives on hold and should be kept to an “absolute minimum”, the head of England’s schools watchdog has said.

Ofsted chief inspector Amanda Spielman spoke out as ministers face growing pressure to keep all schools in England closed after the Christmas holidays.

Amid a surge in Covid cases, teaching unions have told primary school staff it is unsafe to return to work.

The government has said school closures are a “last resort” to curb infections.

Most primary schools in England are expected to open on Monday but secondary schools will reopen on a staggered basis, with exam year pupils returning on 11 January and others returning a week later.

Education Secretary Gavin Williamson announced that all of London’s primaries will remain shut to most pupils, after pressure from local councils to reverse an earlier decision to keep only schools in certain boroughs closed.

It means more than one million primary school pupils will now learn from home for at least the first two weeks of term. Vulnerable pupils and the children of key workers will continue to attend school, the government said.

Mr Williamson said the closures were a “last resort and a temporary solution” to help tackle the particularly high infection rates in the capital, which has been driven by a new, fast-spreading variant of the virus.

Writing in the Sunday Telegraph, Ms Spielman said she welcomed the “real consensus that schools should be the last places to close and the first to reopen”.

“It is increasingly clear that children’s lives can’t just be put on hold while we wait for vaccination programmes to take effect, and for waves of infection to subside,” she said.

“The longer the pandemic continues, the more true this is.”

She added that long periods of remote learning had led younger children to regress in basic skills, with some forgetting how to hold a pencil or use a knife and fork.

For older children forced to spend time away from school, Ms Spielman said Ofsted had observed increases in eating disorders and self-harm.

“For all these reasons, we must renew and maintain the consensus that children’s time out of school should be kept to the absolute minimum,” she wrote.

Head teachers in Wales as well as England have begun legal action to force ministers to reveal data behind the decision for some schools to reopen.

The Department for Education said its decisions were based on new infections and the pressure on the NHS in local areas.

Three of the worst-hit English local authorities have not been told to delay the opening of primaries.

In Rushmoor where cases have increased by 54% week-on-week, the case rate is higher than 26 local authorities where primary schools will remain shut on 4 January.

What is happening with schools across the UK?

In Wales, local councils have been told they can be “flexible” with when they open – with many schools aiming to return for face-to-face lessons from 11 January.

In Scotland, the Christmas holidays have been extended to 11 January, and the following week will be online learning only. A full return to face-to-face learning is planned for 18 January.

A further 57,725 confirmed coronavirus cases in the UK were announced by the government on Saturday, as well as 445 more deaths within 28 days of a positive Covid test. There were no deaths reported in Scotland, due to the holiday period.

Hospitals across the UK have been told to prepare to face the same Covid pressures as the NHS in London and south-east England, amid warnings the virus’s highly infectious new variant is spreading nationwide.

The UK-wide total for people in hospital with Covid has already passed the peak seen during the first wave.

The worsening situation has led education leaders to call on the government to reverse its decision to press ahead with face-to-face learning for many pupils:

Dr Mike Tildesley, a University of Warwick epidemiologist who advises the government as part of the Scientific Advisory Group for Emergencies (Sage), said that while there was a rise in cases in secondary school age groups, there was not strong evidence of transmission in the school environment.

A Department for Education spokesperson said: “Children’s education has consistently been a national priority, which is why we want classrooms to reopen wherever possible in the new term.

“Schools will continue to implement appropriate safety measures to help mitigate the risk of transmission.”