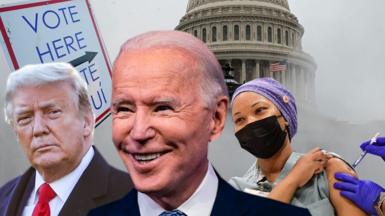 Northern Ireland First Minister Arlene Foster has said there “is a gateway of opportunity for the whole of the UK and for NI” after the UK-EU trade deal.

Mrs Foster told The Andrew Marr Show it was “important” in NI’s centenary year to “take the opportunities that are there for all of our people”.

She also said the deal dealt with “some of the great difficulties that there are with the (NI) Protocol”.

As a consequence, an ‘Irish Sea border’ now exists with most commercial goods entering Northern Ireland from Great Britain requring a customs declaration.

In response, United Unionist Party (UUP) leader Steve Aiken said Mrs Foster’s party should “cut the bravado” and admit they got it “wrong” on the border.

He said: “Arlene Foster’s interview with Andrew Marr has further confirmed that the DUP’s blood red line about a border in the Irish Sea was never a red line at all.

“It was washed away when the DUP supported Boris Johnson`s proposals for a border in the Irish Sea.”

The Democratic Unionist Party (DUP), which Mrs Foster leads, opposed the protocol and had criticised the establishment of such a border.

She told The Andrew Marr show that her party “didn’t want the protocol but it is here”.

Under the terms of the protocol, the Northern Ireland Assembly could vote to overturn the arrangement in four years time.

Mrs Foster said she hoped “by that stage people will see that it is much better to move out of those regulations and into the global market which the rest of the UK can engage in”.

A small number of lorries were delayed at the new BCPs following the end of the transition period on Thursday night.

‘Important to get back to school’

Meanwhile, with Northern Ireland and the UK continuing to grapple with Covid-19, Mrs Foster said Stormont ministers would “do all that we can” to keep young people in schools in January.

Education Minister Peter Weir announced last week that most pupils would not return to school in the first week of the month as planned, and instead return after a week of remote learning.

For some post-primary pupils (Years 8-11), online learning will be in place for the entire month of January.

Mrs Foster said young people “have missed out far too much on education during Covid”.

“However, we do recognise with this new mutant version of Covid-19 that there are difficuties, that it transmits among younger people, therefore we have to take that into consideration,” she said.