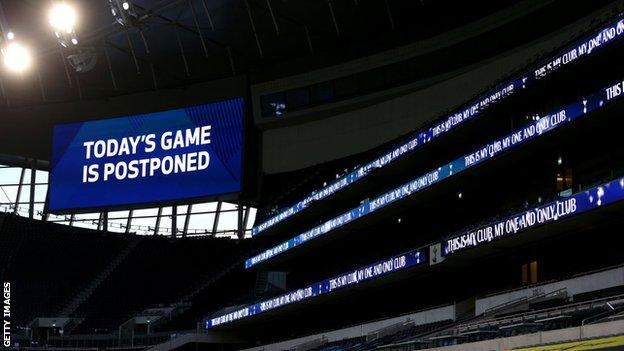 Tottenham’s home game against Fulham was the third in the Premier League to be postponed because of a Covid outbreakSpurs boss Jose Mourinho says the postponement of his side’s Premier League game with Fulham reminded him of when he coached under-13s football.Wednesday’s game was called off three hours before kick-off because of the number of…

Spurs boss Jose Mourinho says the postponement of his side’s Premier League game with Fulham reminded him of when he coached under-13s football.

Wednesday’s game was called off three hours before kick-off because of the number of Fulham players testing positive for coronavirus or showing symptoms. Mourinho called the late notice “unprofessional”.

The Premier League wrote to the clubs explaining the decision was left so late because it had only just received full test results and medical advice.

But Mourinho is unhappy at the lack of communication, given speculation about a postponement had been rife for almost 24 hours before the final call was made.

“When I was coaching the under-13s and under-15s in Portugal 30 years ago, you got to a game at 9.30am and sometimes the opponent wasn’t there, or the referee wasn’t there,” he said.

“It was very frustrating for the kids, who wanted to play football, but couldn’t and only found out in the last minutes. That is almost what happened to us. We almost arrived at the stadium to find out we were not playing.

“But the day before the game, the press was full of reports the game was going to be postponed. The players were telling me it was being reported in their own countries but I couldn’t tell them and neither could my boss, Mr [Daniel] Levy.

“I am not referring to Fulham. I am referring to the organisation. I don’t think it is possible to have a situation like that.”

There has been no clarity from the Premier League about when the Fulham game will be played.

As Tottenham and Fulham are playing in different weeks during the split round of matches this month, finding spare dates will not be easy.

If Spurs beat Brentford in the EFL Cup semi-final on 5 January, the reverse Fulham fixture at Craven Cottage on 24 April will have to be moved. Their continued participation in the Europa League rules out most midweek dates and extended progress in the FA Cup would create a further backlog.

For Mourinho, it feels worryingly like September, when his team would have been forced to play two games in three days in successive midweeks had their EFL Cup tie with Leyton Orient not been called off.

Mourinho was not happy at that congestion and has suggested he would refuse if he was told to go through the same thing again later in the season.

“Nobody spoke a lot about the extreme situation we had in pre-season, probably because people thought it was only a Europa League qualifier,” he said.

“But the situation we had to go through was inhumane. It’s impossible. We have to refuse to go through it again. We cannot accept it at all if any Einstein comes up with the idea of what they did before and have four Premier League games with one day in between.”