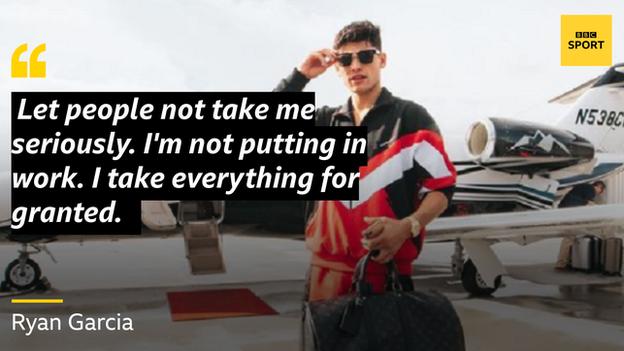 Critics point to social media style over boxing substance. Garcia may silence some of his ‘haters’ if he beats Britain’s 2012 Olympic champion Luke Campbell in Dallas on Saturday. The winner is expected to go on to face WBC world lightweight champion Devin Haney.

“After the fight I’ll say ‘everyone wants to know what will happen when I lose – well I guess we’ll never know’.”

From panic to photo shoots

Confidence pours from Garcia and why not after 20 wins from as many fights. Legends of the fight game in Oscar De La Hoya and Bernard Hopkins promote him, while he trains alongside Saul ‘Canelo’ Alvarez, the sport’s number one fighter who has won world titles at four different weights.

Life was not always so smooth. His mother Lisa – who helps with his business affairs – takes most pride in how the son who now poses in photo shoots overcame anxiety issues aged 17.

“I guess as a young kid I was always an over thinker,” Garcia recalls. “I didn’t understand anxiety could have physical effects on you, like panic attacks. I had a little dark time.

“But I learned my emotions, my triggers, the things I need to stay away from. Yes I may be confident, I put on a show but deep inside I am that same person who has fear and doubts like everyone else.

“Once I learned what it was and started talking about it, not holding it inside me, I felt better. You’re not alone in this. People think it’s fear but it’s something deeper than that. There is something behind your anxiety always.”

‘I take everything for granted’

Garcia has boxed from the age of seven and amassed 15 national amateur titles in the US. He unquestionably has pedigree but his move to shout loudly in the social media space raised eyebrows among some of boxing’s old guard.

He thinks many of those early dissenters are now trying to “catch up”. His videos of quirky boxing drills are shared prolifically and their appeal to even non-boxing fans serves to underline how specific content can connect fighters with a new audience.

“People who are hating say ‘your hands aren’t up’, or ‘your eyes are closed’. Guess what? It adds more comments, it’s more to talk about. All I do is post things that will get people watching. Then in the fight you’ll see my skill level.”

But some are not swayed by a boxing drill, a Ferrari or toned abdominal muscles showcased in a beachfront photo shoot. They don’t even want to see a quick knockout. Instead, they want to see this slick operator dig deep.

“What happens when I do?” he says, before sarcastically adding: “Let people not take me seriously. I’m not putting in work. I don’t push my body. I take everything for granted.

“That’s what you think? Come and see. I don’t think there’s an athlete in the world who works harder than me. I know people are waiting for the moment I get knocked out.”

Garcia lights up when he talks about sharing his training base with Alvarez – boxing’s best-paid fighter.

His analysis of their personalities is simple. He says if Alvarez knows he will dish out a beating in the ring, the quiet Mexican will keep it to himself until it’s done. Garcia in contrast likes to let the world know what will happen.

“Me, I like to let it out and say it – if you’re going to beat me, come beat me,” he says. “If you do you must be the baddest man on the planet because I know I can fight.

“Canelo, man, I have seen his work ethic. If you don’t think I’m soaking in this knowledge you must be crazy because I’m not an ignorant person.”

Many expect Campbell to drag Garcia into the kind of tough night he is yet to experience but he believes he is “stronger, faster and hungrier” than his 33-year-old opponent from Hull.

And, perhaps crucially, he is fighting for more than glitz, glamour, likes or follows. As a 22-year-old father of two he feels he has the motivation he needs to “get tough with it” if he finds himself in a testing battle.

In an age where You Tube stars hastily put on boxing gloves and satisfy millions of subscribers in the name of entertainment, Garcia has the mix of pedigree and charisma the sport can cling to and own.

“From this fight on I think people will see I’ll be in this game for a very, very long time,” he concludes.

A win over Campbell would likely earn him a world title shot.

It might just win over an army of doubters and a few new followers too.