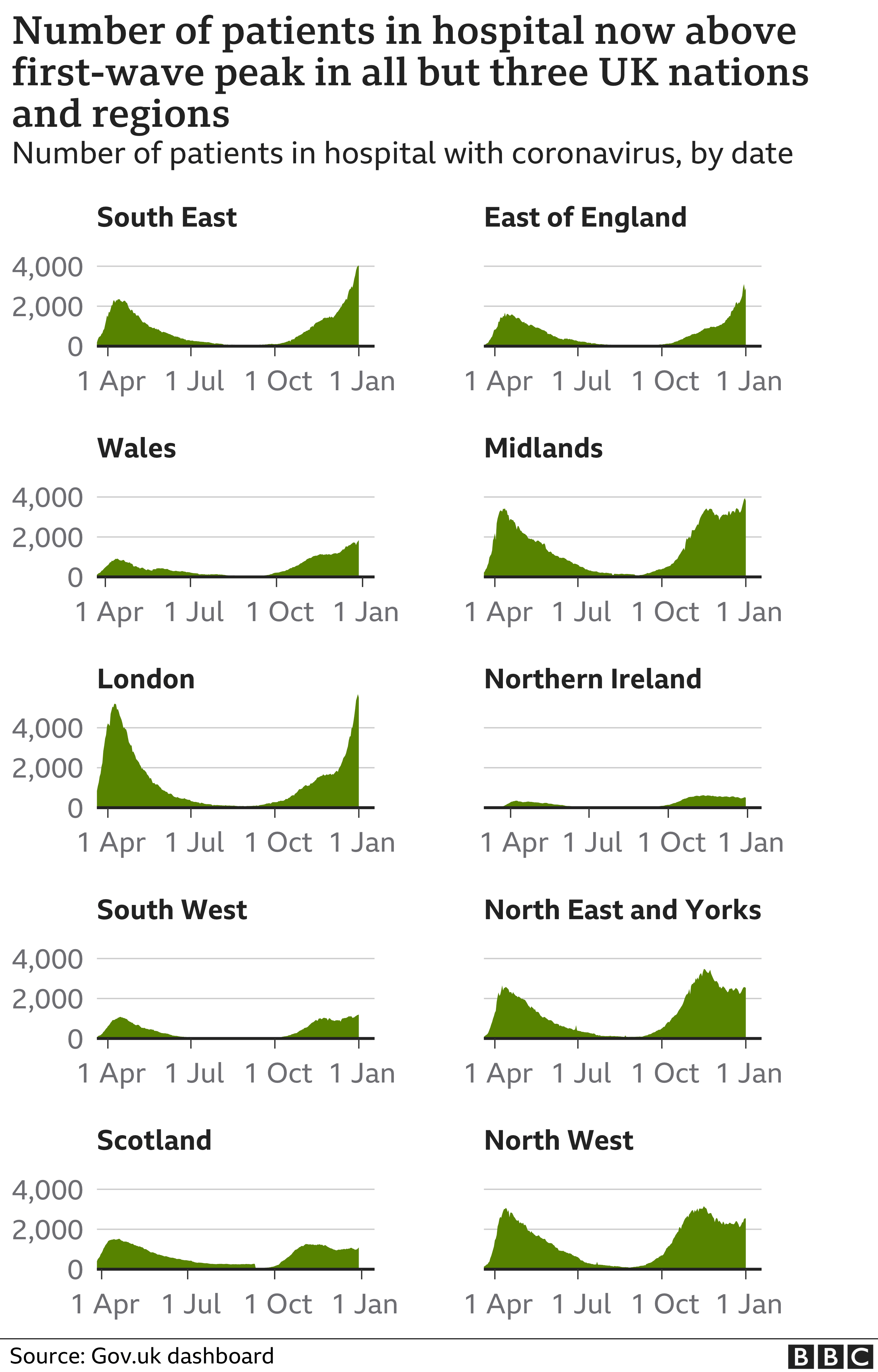 By The Visual and Data Journalism TeamBBC NewsPublishedduration2 hours agoThere have been more than 2.5 million confirmed cases of coronavirus in the UK and nearly 75,000 people have died, government figures show.However, these figures include only people who have died within 28 days of testing positive for coronavirus and other measures suggest the number of…

There have been more than 2.5 million confirmed cases of coronavirus in the UK and nearly 75,000 people have died, government figures show.

Coronavirus cases are now rising fast again, driven by a new variant of the virus thought to be much more easily transmissible than other strains.

A further 57,725 confirmed cases were announced by the government on Saturday.

The sharp rise in numbers is partly down to a lag in reporting over the holiday period but, according to Public Health England, is “largely a reflection of a real increase”.

It is thought the infection rate was much higher than was evident from the reported number of cases during the first peak in spring. Testing capacity was too limited to detect the true number of daily cases.

After the first peak in April, infections started rising again in July, with the rate of growth increasing sharply in September and October. It fell in November before rising steeply in December.

Prof Andrew Goddard, of the Royal College of Physicians, said the virus’s new variant was spreading nationwide and he expected further rises in case numbers over the coming days.

Although the new variant is now spreading more rapidly than the original version, it is not believed to be more deadly.

Where are cases high?

Cases are rising most quickly in Wales where about one in 60 people have the virus, according to the Office for National Statistics (ONS). Cases in Northern Ireland are also up.

Meanwhile, London, the South East and East have the highest estimated rate of people with coronavirus in England.

The darker orange and red areas on the map below show the areas currently seeing the highest number of cases per 100,000 people.

The average number of daily deaths began to rise again in September, following the first peak in Spring.

On Saturday, the government announced a further 445 deaths.

Of those, 349 were in England, 70 in Wales and 26 in Northern Ireland. There were no deaths reported in Scotland, due to the holiday period.

England has seen the majority of UK deaths from Covid-19. Using the 28-day cut-off, there have been nearly 65,000.

The number of Covid-19 patients in hospitals across the UK has risen sharply in recent weeks and is now above the level seen in the spring.

NHS England’s Chief Health Executive Sir Simon Stevens has said that health workers are now “back in the eye of the storm” as coronavirus cases rise.

However, the picture does vary among the nations and regions.

London, the South East and the East of England have seen the biggest increases in recent weeks.

It is hoped the rollout of two vaccines against Covid-19 to the most vulnerable in the UK will help reduce the number of people requiring hospital treatment.

The latest government data shows that more than 900,000 people in the UK had received a vaccination by 27 December.

Restrictions were increased across the UK this week in an effort to tackle the rising number of cases.

In England, three quarters of the population are now under new, higher “tier four” measures. Other areas were moved up to tier three.

The whole of Wales has been placed under lockdown, Northern Ireland began a new six-week lockdown on Boxing Day and Scotland moved to its toughest level four restrictions the same day.

In addition, secondary schools across most of England will remain closed after the Christmas break for an extra two weeks for most pupils, and primaries will stay closed temporarily in some areas with the highest infection rates.

Government figures count people who died within 28 days of testing positive for coronavirus.

The first includes all deaths where coronavirus was mentioned on the death certificate, even if the person had not been tested for the virus. The most recent figures suggest there had been more than 82,000 deaths by 18 December.

The second measure counts all deaths over and above the usual number at the time of year – that figure was nearly 83,000 by the same date.

The most recent figures available from the ONS are for the week ending 18 December, which show there were 14,627 deaths registered in the UK.

Deaths normally do rise at this time of the year, but the data from the ONS and its counterparts in Scotland and Northern Ireland show the second wave of the virus has pushed the death rate above the average seen over the past five years by about 11%.

Overall, the figures are still well below the peak of 9,495 Covid-19 related deaths recorded in a week, reached on 17 April.

The government’s current estimate for the R number across the whole of the UK is 1.1 to 1.3.