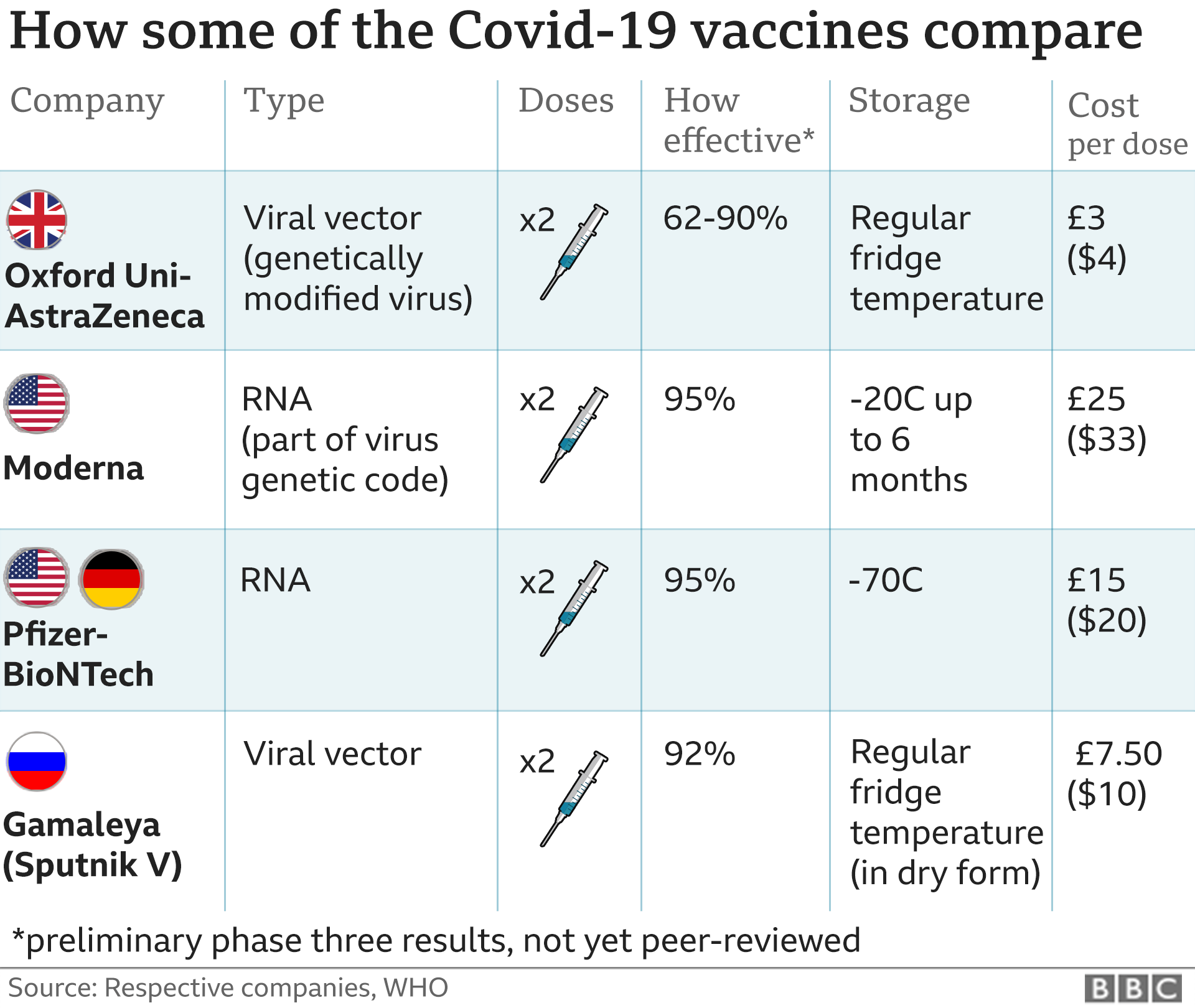 By Philippa RoxbyHealth reporterPublishedduration1 hour agoimage copyrightPA Wireimage captionMargaret Keenan, aged 90, became the first person in the world to be vaccinatedThe NHS has begun the biggest mass vaccination campaign in its history, with a jab that protects against Covid-19.So far, two vaccines have been approved in the UK. The Pfizer-BioNTech vaccine was the first…

The NHS has begun the biggest mass vaccination campaign in its history, with a jab that protects against Covid-19.

So far, two vaccines have been approved in the UK. The Pfizer-BioNTech vaccine was the first to be approved for mass use in over-16s.

More than 600,000 people in the UK have been vaccinated since Margaret Keenan became the first in the world to get that jab outside of a clinical trial.

Four weeks later, a vaccine developed by Oxford-AstraZeneca was also judged to be safe, and roll out of this second vaccine will now begin alongside the Pfizer jab.

Who will get the vaccine first?

Broadly, vaccines are being given to the most vulnerable first, as set out in a list of nine high-priority groups, covering about a quarter of the UK population.

They are thought to represent 90-99% of those at risk of dying from Covid-19.

People aged over 80 in hospital, frontline health staff and care home workers have been the first to get the Pfizer jab at 70 designated hospitals hubs across the UK.

Vaccination has now begun in care homes, which the government announced on 23 December.

The second phase of vaccination will focus on the rest of the population, mainly the under-50s, who are much less likely to be ill with Covid-19.

Teachers, transport workers and the military could be prioritised at that point, but more data on how well the vaccines are working will be needed before that decision is made.

It could be well into 2021 before this phase begins.

Both the Pfizer and Oxford-AstraZeneca vaccines require two doses to provide the best possible protection.

But when approval was announced for the Oxford-AstraZeneca vaccine on 30 December, it was also announced that the policy would now change – the new priority would be to give as many people a first shot of either vaccine, rather than providing the required two doses in as short a time as possible.

Everyone will still receive their second dose, but this will now be within 12 weeks of their first.

The Oxford-AstraZeneca second dose should be given between four and 12 weeks after the first, while the interval between the first and second Pfizer doses should be three to 12 weeks.

Can different vaccines be mixed and matched?

The official guidance states that every person should get the same vaccine for both doses.

Dr Mary Ramsay, Head of Immunisations at PHE, said: “We do not recommend mixing the Covid-19 vaccines – if your first dose is the Pfizer vaccine you should not be given the AstraZeneca vaccine for your second dose and vice versa.”

However, in the very rare circumstance in which only one vaccine is available at a vaccination site or it’s unknown which product an individual received for their first dose, Public Health England says a different vaccine could be administered.

But this advice does stress “this option is preferred if the individual is likely to be at immediate high risk or is considered unlikely to attend again”.

“There may be extremely rare occasions where the same vaccine is not available, or where it is not known what vaccine the patient received,” Dr Ramsay said. “Every effort should be made to give them the same vaccine, but where this is not possible it is better to give a second dose of another vaccine than not at all.”

How many vaccine doses are there?

The UK received an initial delivery of 800,000 doses of the Pfizer jab which were shared out fairly across the four UK nations.

Although the UK was planning to have 10 million doses of the Pfizer jab before the end of the year, it is likely to receive just four million. However, in total it has 30 million doses on order.

The UK has ordered 100 million doses of the British-made Oxford-AstraZeneca vaccine – enough to vaccinate 50 million people.

Where will I get a vaccine?

You’ll be invited to book an appointment to get a vaccine as soon as it’s your turn, probably by letter.

The NHS is recruiting 30,000 volunteers to help with the rollout, including lifeguards, airline staff and students – who will be trained to give the jabs.

About 200 GP surgeries will offer vaccinations to the over-80s first.

The programme will then be expanded out to more than 1,000 surgeries – with each local area having a designated site.

Will everyone be vaccinated?

The eventual aim is that as many people as possible over the age of 16 receive a Covid-19 vaccine.

It won’t be compulsory, though – no other vaccines in the UK are – as experts say this wouldn’t help create confidence in the vaccine.

The government has so far ordered seven different types of vaccine and expects to receive 355 million doses.

If everyone needs two doses, that would certainly be enough for every adult in the UK.

Which vaccine will I get?

The experts have concluded that both vaccines are very effective, and have not stipulated a preference for either one in any specific population.

What about people with allergies?

Anyone with a previous history of allergic reactions to the ingredients of the vaccine should not receive it, but those with any other allergies such as a food allergy can now have the vaccine.

A severe allergic reaction – known as anaphylaxis – is a very rare side-effect with any vaccine, but it can happen in those at risk. Most people, however, will not be affected in any way.

The medical regulator, the MHRA, says anyone due to receive their vaccine should discuss any medical history of serious allergies with their healthcare professional beforehand.

I’m pregnant – will that affect when I’m vaccinated?

Vaccination with either vaccine should only be considered for pregnant women when the potential benefits outweigh any potential risks – for instance where the risk of exposure to coronavirus is high and cannot be avoided, or where the woman has underlying health conditions that put her at high risk of complications of Covid-19.

Women should discuss the benefits and risks of having the vaccine with their healthcare professional and reach a joint decision based on individual circumstances.

Women who are breastfeeding can be given the vaccine.

There are no specific safety concerns with the vaccines – but they were not tested on pregnant women during the trials.

Pregnant women are likely to be low down the list of priority groups because of their age, and may only be offered a vaccine in the second phase in 2021.

Can I pay to be vaccinated sooner?

No – this vaccine is being rolled out free to people via the NHS.

You can’t jump the queue by paying for it, but there should be plenty of vaccine to go round.

Should I leave a gap between getting the flu and Covid vaccines?

If you’re eligible for a flu vaccine, you should get it as soon as possible, particularly if you will also be in a high-risk priority group for a Covid jab.

Having both illnesses at once this winter could be dangerous.

At its last meeting, the Joint Committee on Vaccination and Immunisation (JCVI) recommended leaving at least seven days between the vaccines.