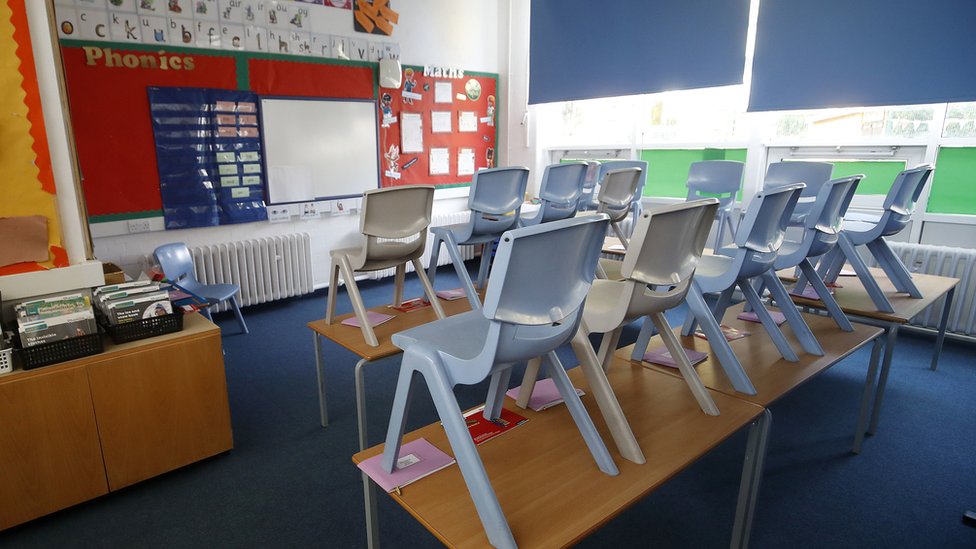 All primary schools in London will remain closed for the start of the new term, the government has confirmed.

London mayor Sadiq Khan said the government had “finally seen sense and U-turned” on its plan to allow pupils in some areas to return on Monday.

Leaders of nine London local authorities had written to Education Secretary Gavin Williamson urging him to rethink the decision.

Mr Williamson said the city-wide closures were “a last resort”.

The government said it had decided all primary schools in the capital would be required to provide remote learning after a further review of coronavirus transmission rates.

Vulnerable pupils and the children of key workers will continue to attend school, the government said.

Schools in nine London boroughs and the City of London district had been set to reopen – while those in the remaining 23 boroughs would have stayed closed from 4 January.

The decision was criticised and branded “illogical” by councillors and residents in the affected areas, who called for primary schools across the capital to move to online learning until 18 January.

They pointed out that Covid-19 infection rates were higher in some boroughs told to reopen schools than in others where they were not.

In a tweet, Mr Khan said a city-wide closure was “the right decision” and thanked education minister Nick Gibb for “our constructive conversations over the past two days”.

“The government’s original decision was ridiculous and has been causing immense confusion for parents, teachers and staff across the capital,” Mr Khan said.

Dan Thorpe, leader of Greenwich council, said he was “absolutely delighted” to hear Mr Williamson had “finally climbed down and reversed his decision”.

Kingston Council leader Caroline Kerr said she was “dismayed” at the government’s handling of situation while a council statement added: “It never made sense that neighbouring boroughs were being instructed to have different arrangements despite having similar rates of infection.”

He said the decision “should have been made weeks ago, as the public health situation became clear”.

Mary Bousted, of the National Education Union, said the government was right to reverse its “obviously nonsensical position”.

“What is right for London is right for the rest of the country,” she said, and she called on ministers to “do their duty” by closing all primary and secondary schools nationwide for at least two weeks.

“Just at the moment when we need some decisive leadership, the government is at sixes and sevens,” he said.

Shadow education secretary Kate Green said the move was “yet another government U-turn creating chaos for parents just two days before the start of term”.

“Gavin Williamson must still clarify why some schools in tier 4 are closing and what the criteria for reopening will be,” she said.

In a statement, Mr Williamson said children’s education and wellbeing remained “a national priority” and moving the whole of London to remote education “really is a last resort and a temporary solution”.

“We will continue keep the list of local authorities under review, and reopen classrooms as soon as we possibly can,” he said.

Health Secretary Matt Hancock said the situation in London had continued to worsen in the past week and infections and hospital admissions had risen sharply.

“While our priority is to keep as many children as possible in school, we have to strike a balance between education and infection rates and pressures on the NHS,” he said.

The Department for Education had previously said decisions on school closures and openings were based on new infections, positivity rates, and pressures on the NHS.

A spokeswoman for the department said: “In response to concerning data about the spread of coronavirus, we have implemented the contingency framework for education in a small number of areas of the country, requiring schools to provide remote learning to all but vulnerable and critical worker children and exam years.

“Decisions on which areas will be subject to the contingency framework are based on close work with PHE, the NHS, the Joint Biosecurity Centre and across government.”

Are you a parent or teacher who will be affected by the London primary school closures? Email haveyoursay@bbc.co.uk.