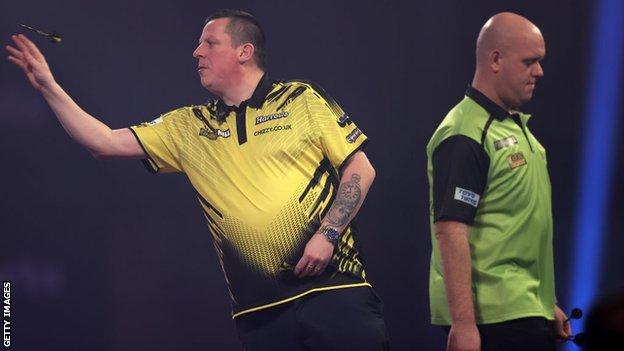 Chisnall had not beaten the three-time world champion in their last 27 matches but raced to a first world semi-final.

Chisnall produced finishes of 141 and 95 to take the opening set against Van Gerwen and had a total of three 100-plus checkouts, hitting 15 of 31 doubles.

He came within a whisker of a nine-dart leg, missing double 12, but calmly recorded an 80 to seal a famous victory, hitting double top with his first match dart.

“I said before that he was going to have to play well to beat me because I’ve been playing well,” Chisnall said. “I’ve been on the radar for the last few years. I know my own ability and I know I can win this.”

“It was probably my best performance for a long time, maybe the last two years to be honest,” the Scotsman said.

He will face Price in the opening semi-final after the Welshman saw off Gurney. Price was twice two sets ahead but the Northern Irishman claimed six successive legs to level at 4-4.

It went to the deciding leg and after Gurney was unable to find 108, Price took out double top with his first match dart.

“I was rubbish in the last three sets and was lucky to get over the line,” Price admitted.