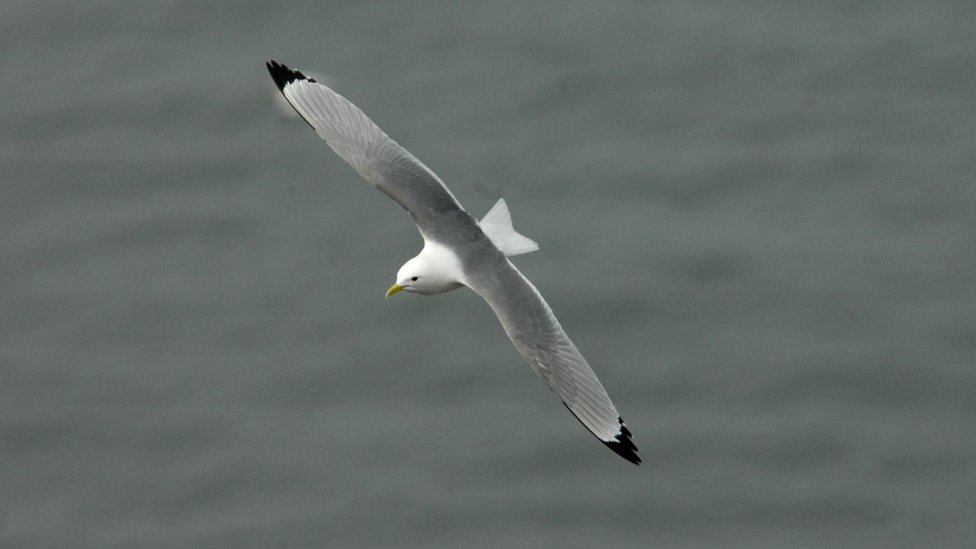 By Roger HarrabinBBC environment analystPublishedduration7 hours agoimage copyrightRSPBimage captionThe RSPB is worried about the effect the wind farm could have on kittiwakesThe bird charity RSPB has criticised a government decision to permit an offshore wind farm expected to harm birds feeding in the North Sea.The giant Hornsea Three development lies 75 miles away from Flamborough…

The bird charity RSPB has criticised a government decision to permit an offshore wind farm expected to harm birds feeding in the North Sea.

The RSPB says kittiwakes will need to fly through the area, dodging turbines, to reach feeding grounds.

The developers have promised to compensate for the impact on the birds.

They plan to do this by building four bespoke nesting towers to encourage them on land.

But the RSPB says it will take a decade to see whether this idea works – and that will be too late because the wind farms will be up and running by then.

Wind farms are not a straightforward subject for the RSPB in its efforts to protect the UK’s birds.

The charity supports the growth of renewable energy to combat the effects of climate change, but is fearful of the impact on birds round the coasts as turbines increase to fulfil the prime minister’s promise of powering every home by wind energy.

Duncan Clark from developers Orsted said: “Climate change remains a very serious threat to our environment and habitats and there is an ever-pressing need to act.

“Hornsea Three could provide clean power to over two million UK homes and offset over 128.2 million tonnes of carbon dioxide over its lifetime.”

The RSPB says computer modelling suggests the huge turbines, stretching over 200 metres, will cause the deaths of 73 kittiwakes a year.

Can we compensate for bird deaths?

Mr Clark said that the firm would offset the projected deaths by building four artificial kittiwake nest towers on land, which should prompt an equal number of the birds to be born.

But the RSPB says the compensation measures proposed at Hornsea Three are speculative, and that like other wind developments in the North Sea, they are undermined by a lack of reliable data.

He said kittiwakes had been struggling for three decades – partly because climate change is altering fish patterns and partly because of over-fishing of slim fish called sand eels, which are ground into fishmeal for salmon and pigs.

Energy Secretary Alok Sharma acknowledged in his ruling on the development that wildlife would be harmed by Hornsea Three, but he granted consent on the balance of benefits.

His ruling said: “The adverse impacts… do not outweigh the significant benefits of the development in respect of contribution it would make to meeting the identified need for renewable electricity generation.”

How do birds navigate wind farms?

Kittiwakes appear to try to slalom their way through the wind farms that are springing up across the North Sea.

Other birds such as guillemots and razor bills seem to fly round the thickets of turbines, a journey which uses energy that could otherwise be used for breeding.

The RSPB and wind farm association Renewable UK both blame the government for failing to mitigate the conflict between wildlife and clean energy.

Mr Dodd said: “The government has to lead on this. We clearly need loads more offshore wind, and the RSPB supports that. But the North Sea is filling up with turbines and we have to avoid development in the most sensitive areas. We need much better knowledge.

“This issue is cumulative – maybe one wind farm wouldn’t make a great deal of difference, but the scale of the plans is massive.”

The wind farm industry group Renewable UK anticipates that offshore wind turbine operators will face increasing scrutiny in the coming decade – both in terms of their impact on wildlife and the structures needed on sensitive coastlines to bring the power onshore.

The group has urged the government to restore funding to the heavily-cut Natural England, so it can adequately supervise developments.

“Advisory bodies like Natural England need more funding from the government so that they can take decisions in a more timely manner.”

Some turbines off the coast of Scotland are now being fitted with cameras on the tower and blades to monitor bird strikes, although this may be very challenging in rough weather.

In the US, a study suggested that painting one of the three blades black seemed to help birds avoid contact – but the RSPB says that study was on an onshore turbine, and needs verification.

Another scheme has seen wind farms turned off when the approach of rare condors is detected through radio transmitters they carry.

This only works for threatened condor but the US equivalent of the RSPB, the Audubon Society, has warned that if climate change continues apace, hundreds of North American bird species’ ranges will shrink by at least half by 2100.

“Climate change is the biggest impact on birds,” said Garry George from Audubon.