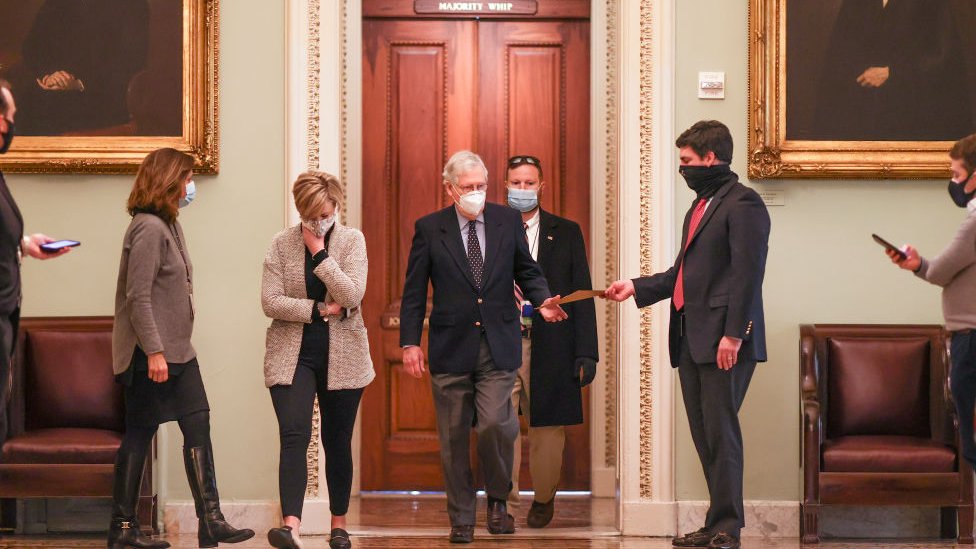 Publishedduration1 hour agoimage copyrightGetty Imagesimage captionMitch McConnell (C) heading for the Senate floor on TuesdayThe US Senate’s Republican leader has rejected calls from an unlikely alliance of President Donald Trump, Democrats and some congressional Republicans to boost coronavirus aid.Mitch McConnell said hiking aid cheques from $600 (£440) to $2,000 would be “another fire hose of…

The US Senate’s Republican leader has rejected calls from an unlikely alliance of President Donald Trump, Democrats and some congressional Republicans to boost coronavirus aid.

The Democratic-controlled US House of Representatives had voted to increase the payments to Americans.

The outgoing president’s intervention has divided his fellow Republicans.

Congress agreed the smaller $600 payments in a Covid relief and government funding bill that Mr Trump sent back to Capitol Hill before Christmas, with the president seeking higher stimulus payments.

On Monday, congressional Democrats – usually sworn political foes of Mr Trump – passed the measure for $2,000 cheques that he requested.

Dozens of House Republicans, reluctant to defy Mr Trump, sided with Democrats to approve the package.

Mr Trump begrudgingly signed the original bill with the lower payments into law on Sunday, but has continued to demand more money.

“Unless Republicans have a death wish, and it is also the right thing to do, they must approve the $2,000 payments ASAP,” he tweeted on Tuesday.

What did McConnell say?

The Kentucky senator rejected Senate Democrats’ calls for the upper chamber to vote on the $2,000 cheques package passed by their counterparts in the House.

“The Senate is not going to be bullied into rushing out more borrowed money into the hands of Democrats’ rich friends who don’t need the help,” Mr McConnell said on the chamber floor.

Instead he offered to roll the proposal for $2,000 cheques into another bill to include other measures that have been requested by Mr Trump but raised objections from Democratic leaders.

One would end legal protection for tech companies, known as Section 230. The other would set up a bipartisan commission to investigate electoral fraud, something which Mr Trump has alleged in the presidential election without providing evidence.

How are Democrats reacting?

Liberal Vermont Senator Bernie Sanders, an independent who votes with Democrats, said on the Senate floor: “All we are asking for is a vote. What is the problem?

And House Speaker Nancy Pelosi said: “These Republicans in the Senate seem to have an endless tolerance for other people’s sadness.”

How do other Republicans see it?

The party usually professes an opposition to government spending as an article of faith, but some of its top senators have rallied behind Mr Trump’s call for $2,000 cheques.

They include Marco Rubio of Florida and Josh Hawley of Missouri, both considered possible presidential contenders in 2024.

So have Georgia’s Republican senators, David Perdue and Kelly Loeffler, who are fighting for their political lives in a 5 January election against two Democratic challengers. The vote will decide which party controls the Senate next year.

But other Republicans have argued the relief bill already provides a wider safety net once its jobless benefits, rental assistance and loans to small businesses to keep workers on their payroll are taken into account.

Senator Pat Toomey of Pennsylvania said that he opposed “blindly borrowing” billions of dollars to send cheques to “millions of people who haven’t lost any income”.