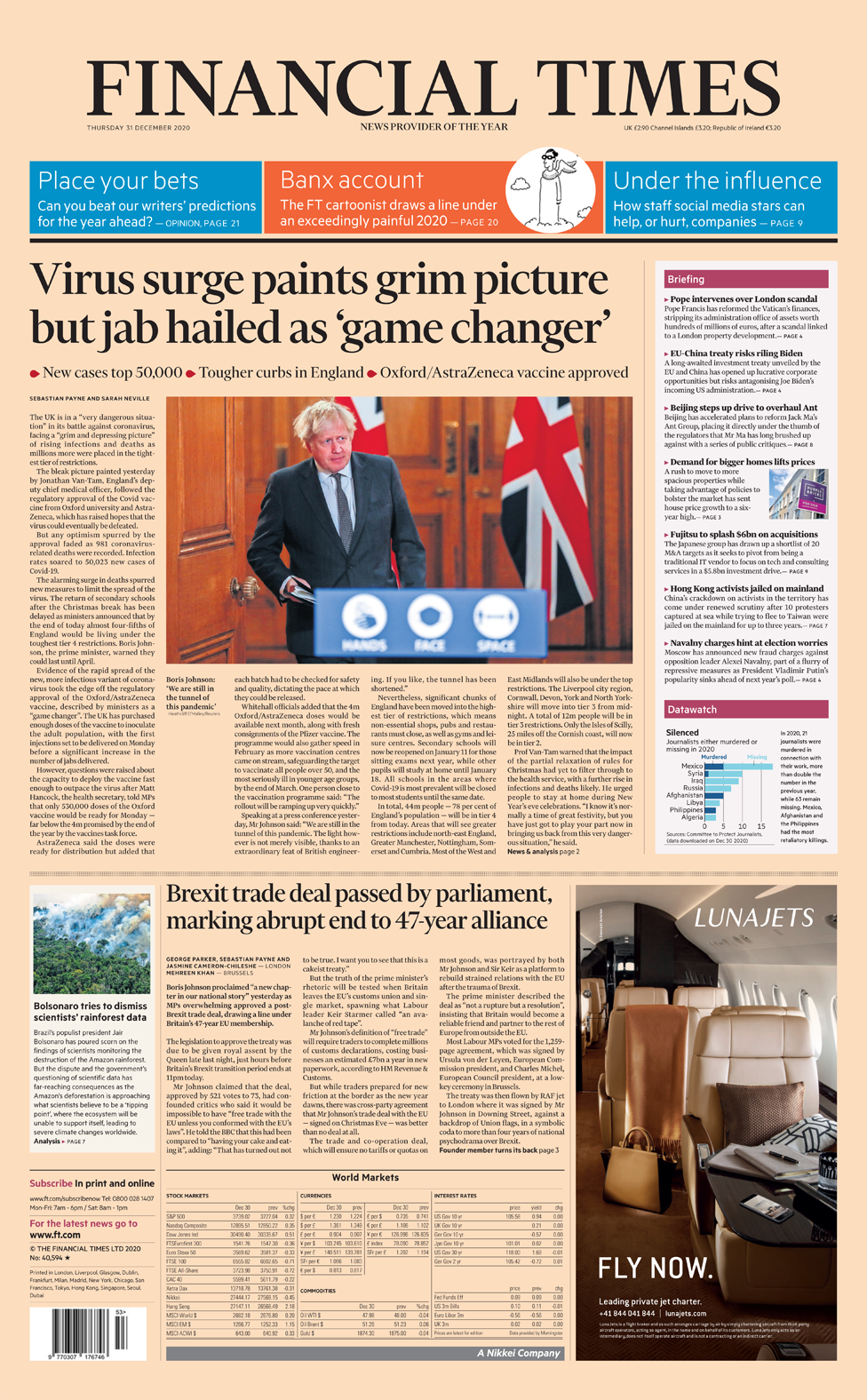 By BBC NewsStaffPublishedduration1 hour agoimage captionThe UK will open up “by Easter” says the Times which reports Boris Johnson’s pledge following the approval of the Oxford vaccine. The paper says at least two million people a week will receive a jab – with a 30 million target by the end of May 2021. It adds…

Many of Thursday’s front pages describe a momentous and historic day for the UK.

“Two giant leaps to freedom” reads the headline in the Daily Mail, which says the approval of both the Oxford Covid vaccine and the Brexit trade deal herald “a new dawn for Britain”.

The Sun adopts a similar tone. It depicts the new jab as a rocket blasting into space, emblazoned with the Union Jack, as the headline declares: “One giant hope for mankind.”

The Times says the jab will bring “freedom by Easter”. The paper reports that the NHS is aiming to vaccinate almost 30 million people before the end of May – with a shift in focus meaning they’ll administer as many first jabs as possible, before concentrating on the follow up injections.

But the Guardian reports that the makers of the Pfizer/BioNTech vaccine have raised concerns about the changes. The paper says they cannot guarantee its sustained protection, if the second dose is given more than 21 days after the first.

For most of the papers, the hope offered by the vaccine is tempered by the reality of the days and weeks ahead.

For the Daily Mirror, Wednesday was “a day of despair and hope”, with the Oxford vaccine approved shortly before the largest daily death toll since April was announced.

“It’s always darkest before the dawn” reads the headline, above a photograph showing ambulances lined up outside Queen Elizabeth Hospital in Birmingham. With hospitals struggling to cope and 20 million people moved into the toughest tier four restrictions, it was, says the paper, “another grim day”.

The Daily Telegraph says Britain’s in a race to roll out the vaccines to stave off a third national lockdown. It describes the decision to keep secondary schools and many primaries in England closed as “a major reversal by the government” which will “raise fresh questions about whether exams will go ahead as normal in the summer.”

Boris Johnson is pictured signing the Brexit trade deal at Downing Street on many of the front pages. The Guardian shows him holding aloft the massive leather-bound 1,200-page document – after MPs approved the fast-tracked legislation.

The Daily Express declares that the end of the transition period at 23:00 GMT will mark “Our finest hour” and “a time to come together as a country”. “Regardless of how anyone voted in 2016”, says the paper, “it’s time to unite in pursuit of a fairer, healthier and more prosperous future.”

The Sun notes that all of England’s pubs are now shut – with the exception of those on the Isles of Scilly, which remains in tier one.

The paper reports that some social media users have suggested it could be the only place to enjoy a proper New Year’s Eve – but says the islands have been quick to point out that they are closed to tourists.