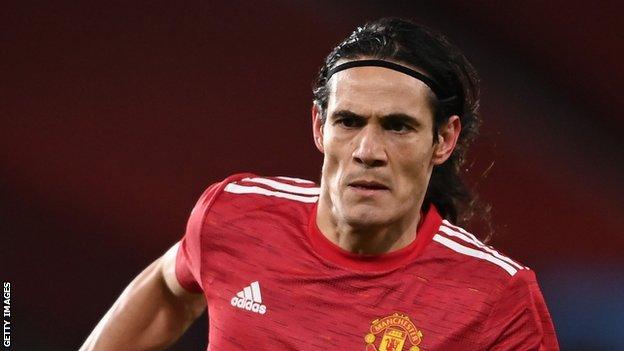 Former Paris St-Germain striker Cavani joined United on a free transfer in OctoberManchester United’s Edinson Cavani has been given a three-match ban and a £100,000 fine for a social media post containing a Spanish phrase that is offensive in some contexts.The Uruguayan, 33, pleaded guilty to a Football Association charge of using insulting and/or improper…

Manchester United’s Edinson Cavani has been given a three-match ban and a £100,000 fine for a social media post containing a Spanish phrase that is offensive in some contexts.

The Uruguayan, 33, pleaded guilty to a Football Association charge of using insulting and/or improper words.

Cavani sent the message after scoring a winner at Southampton on 29 November.

The striker subsequently deleted the post and apologised when the meaning that could be attached was pointed out.

Along with the ban and fine, Cavani must also complete a “face-to-face” education programme.

Cavani’s ban will begin immediately, ruling him out of United’s Premier League game with Aston Villa on New Year’s Day.

He is also set to miss the EFL Cup semi-final against Manchester City on 6 January and FA Cup third-round tie with Watford on 9 January.

Cavani issued an apology shortly after posting the message on Instagram following United’s 3-2 comeback win against the Saints.

“It was intended as an affectionate greeting to a friend, thanking him for his congratulations after the game,” said the former Napoli and Paris St-Germain striker.

“The last thing I wanted to do was cause offence to anyone.

“I am completely opposed to racism and deleted the message as soon as it was explained that it can be interpreted differently.”

The FA charged Cavani for the post on 17 December.

With reference to new guidelines agreed in the summer, it said the post was alleged to be “insulting and/or abusive and/or improper and/or brought the game into disrepute”.

It was also alleged “that the comment constitutes an aggravated breach” which “included reference, whether express or implied, to colour and/or race and/or ethnic origin”.

In response to the ruling, a Manchester United statement said: “Despite his honest belief that he was simply sending an affectionate thank you in response to a congratulatory message from a close friend, he chose not to contest the charge out of respect for, and solidarity with, the FA and the fight against racism in football.

“The club trusts that the independent regulatory commission will make it clear in its written reasons that Edinson Cavani is not a racist, nor was there any racist intent in relation to his post.”

This is a pretty big lesson – not just for Cavani and United but the whole of English football.

There is sympathy for the Uruguayan in what was an innocent personal post. However, there is simply no excuse for not being aware of the wider aspect of the society he is living in – and either he should have been aware, or the club should have made him aware of the offence it could cause.