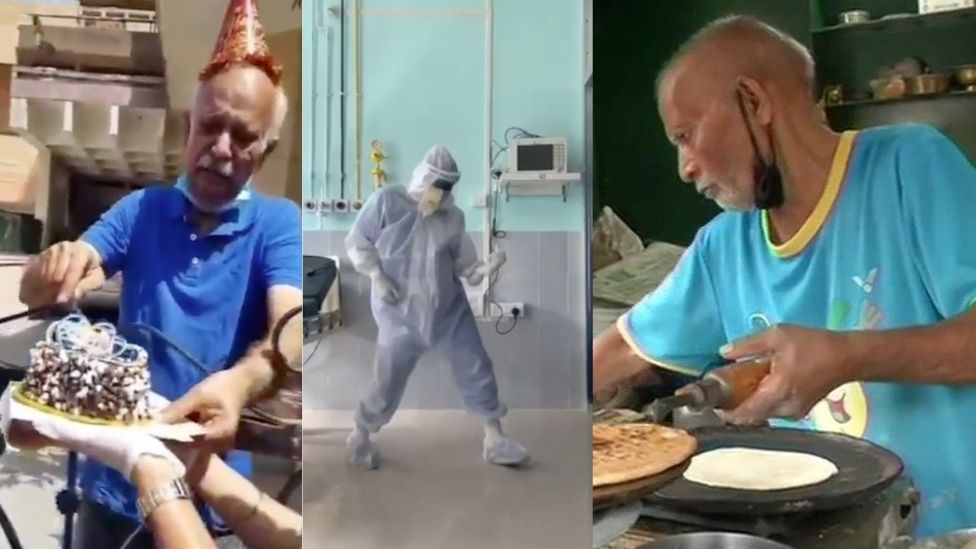 Publishedduration1 hour agoimage copyrightPanchkula Police/ Arun Senapati/ ANIimage captionFour acts of kindness that cheered people up in 2020Covid-19 dominated headlines throughout the year as people navigated successive waves of the infection, lockdowns and travel restrictions. But there were some social media moments in India that cheered people amid the gloom, writes the BBC’s Andrew Clarance.…

Covid-19 dominated headlines throughout the year as people navigated successive waves of the infection, lockdowns and travel restrictions. But there were some social media moments in India that cheered people amid the gloom, writes the BBC’s Andrew Clarance.

Here are four that warmed people’s hearts in 2020, bringing them together.

‘You’ve made my day’

India announced a lockdown to curb the spread of Covid-19 on 25 March. Many people were stuck at home, especially the elderly who found themselves alone and cut-off from family and friends.

So Karan Puri, an elderly resident of Panchkula, a town in the northern Indian state of Haryana, was in for a pleasant surprise when the police came knocking at his door in April.

In a video that later went viral, Mr Puri can be seen striding towards the gate, saying, “I am Karan Puri, I live alone and I am a senior citizen.”

But what happens next leaves him stunned and touched. As the officers sing “happy birthday to you”, Mr Puri doubles over in surprise, and asks them how they found out. He tears up and tells the police officers that his children live abroad and he was indeed feeling lonely.

The officers then say “we are like your family” and “there is no need to feel alone”. They bring out a birthday cake and everybody starts clapping and singing again.

This heart-warming video melted hearts on social media and won the officers praise for their thoughtful gesture.

A video that saved a small eatery

The video showed Kanta Prasad, 80, breaking down on camera over the lack of business at his street food stall during the pandemic.

Street food, although hugely popular, had taken a massive hit during the pandemic, forcing many vendors to shut shop.

Mr Prasad and his wife, Badami Devi, had been running their shop, Baba ka dhaba, since 1990 in south Delhi’s Malviya Nagar

In the viral video, Mr Prasad shows the dishes they have prepared for the day. When asked how much he has earned so far, he says “very little” and breaks down.

The blogger, Gaurav Wasan, shared the clip on Instagram in early October. It travelled quickly, soon making its way on to Twitter. A woman shared it saying it “completely broke her heart” and urged people in Delhi to visit Baba ka Dhaba and help Mr Prasad and his wife.

And the appeal was heard as crowds of people and camera crews gathered at the small eatery within hours after the video went viral.

The tweet was noticed by celebrities – from Bollywood stars to cricketers – and ordinary people alike. The video has now been watched nearly five million times.

People donated from all over the world to help the elderly couple. But the story took an ugly turn when Mr Prasad accused Mr Wasan of misappropriating funds collected under his name. The blogger denied the allegation.

Mr Prasad also filed a police complaint against him. But it appears the that two have patched up now. Mr Prasad reportedly thanked Mr Wasan after opening a new restaurant recently and the blogger wished him luck.

Arup Senapati started working as a Covid doctor in the north-eastern Indian state of Assam in April.

As the pandemic continued to overwhelm hospitals, health workers and doctors like him were forced to work around the clock, often to a point of physical and mental exhaustion.

But Dr Senapati found a unique way to de-stress while also cheering up Covid-19 patients. It also happened to be something he loved doing – dancing to Bollywood numbers.

A colleague filmed one of his impromptu dance routines in October and tweeted the video, which instantly went viral. It has so far been watched 5.7 million times.

Bollywood star Hrithik Roshan, famous for his dance moves, praised Dr Senapati, who says it was his humble attempt to make his patients laugh. But he never imagined that his video would reach so many people!

The patient who danced after beating Covid

When Snehal Satpute returned home after recovering from Covid-19, she didn’t expect the welcome she received.

In a video which went viral on social media in July, her 23-year-old sister Saloni is seen dancing with joy on the street in front of their house to welcome her sister home. Snehal then joins her and other family members also come out to participate.

Saloni told the Pune Mirror newspaper that she wanted to “relay a message to her neighbours who had shunned them after five members of her family tested positive”.

In India, stigma against those who had contracted Covid was a widespread issue when the pandemic first took hold there.