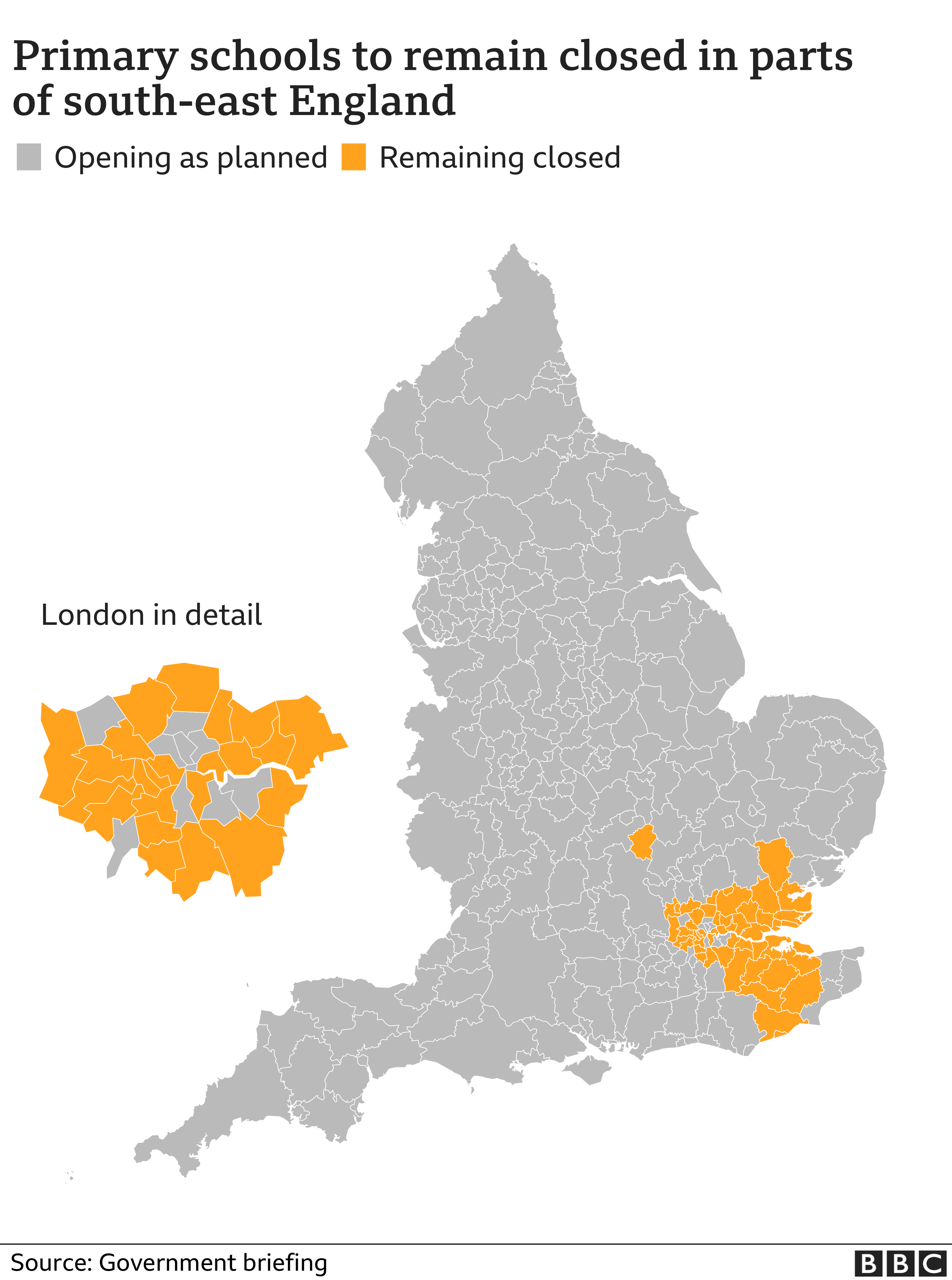 By Hannah RichardsonEducation and social affairs reporterPublishedduration1 hour agoSecondary schools across most of England are to remain closed for an extra two weeks for most pupils, to help regain control of coronavirus.Education Secretary Gavin Williamson told the Commons that exam-year pupils would return a week earlier than their schoolmates in the week of 11 January.In…

Secondary schools across most of England are to remain closed for an extra two weeks for most pupils, to help regain control of coronavirus.

Education Secretary Gavin Williamson told the Commons that exam-year pupils would return a week earlier than their schoolmates in the week of 11 January.

In the meantime, schools will have more time to set up mass testing plans.

In a few areas with the highest infection rates, primaries would remain closed temporarily, he added.

The areas where primary schools would remain closed are: most of London, much of Essex and Kent, Hastings and Rother in East Sussex, Milton Keynes and parts of Hertfordshire.

Mr Williamson said the temporary school shutdowns would cut chains of transmission. Primary closures would be reviewed every two weeks.

But teaching unions said the move did not go far enough, and one labelled it another “last-minute mess”. They have been calling for a working test-and-trace system since before schools returned from the lockdown in September.

The move comes after most of England was put into the toughest tier four restrictions, and follows warnings from medics about pressure on hospitals – and from government scientists about the increasing contagiousness of the new strain of coronavirus.

Prime Minister Boris Johnson said: “We must face the reality. The sheer pace of and spread of this new variant requires us to to take even tougher action in some areas.”

He stressed that the children of key workers and vulnerable pupils would still be able to return to primaries or secondaries next week.

“At this critical moment, with the prospect of freedom within reach – we’ve got to redouble our efforts to contain the virus,” he said.

Mr Williamson said the delay in reopening secondary schools would allow head teachers to develop and set up mass testing plans for their pupils.

“In the face of a rapidly changing situation, I am determined to act to preserve lives and the NHS, as we continue to protect education and put children first.

“We are making changes to the start of term to give more time for the rollout of our first of its kind rapid testing programme, to identify students who have the virus but don’t display any symptoms.”

He added that the government expects to deliver 50,000 devices to schools across the country on 4 January to support remote learning, with 100,000 devices to be delivered during the first week of term.

But Kate Green, Labour shadow education secretary, said: “Only days before many schools should have been opening again to all pupils, the secretary of state has announced that many will not be returning as planned.

Her Labour colleague, Yvette Copper, said schools in her constituency had received no support or allocation of funding, and no contact from the military, which has been organising testing in some schools.

She added: “They all want to do this mass testing but the support they are getting is always too late, too chaotic.”

But Mr Williamson said the testing programme would help keep education settings as safe as possible for all students.

“Because Covid infection rate is particularly high among this age group,” he said, “we are going to allow more time so that every school and college is able to fully roll out testing for their pupils and staff.

“This kind of mass testing will help protect not just children and young people, but benefit everyone in the community.

“It will break those chains of transmission that are making infection rates shoot up.”

The primary schools affected would be reopened as soon as possible, Mr Williamson said, adding that testing for primary school staff would follow in January.

It is a significant step, as ministers have repeatedly stated that schools would remain open – and even threatened council areas which wanted to close their schools early for Christmas with legal action.

The general secretary of the Nasuwt teachers’ union, Patrick Roach, said the announcement offered belated clarity but did not go far enough.

“Stronger preventative action is needed to limit the further transmission of the coronavirus in schools and colleges, including enabling the greater use of remote and blended learning which would enable effective social distancing, which is vital to minimising virus transmission.”

The leader of the National Association of Head Teachers, Paul Whiteman, said: “This is another last-minute mess which could so easily have been avoided if the government had listened to school leaders before the holidays.

“Instead, back then, schools which wanted to shift to remote learning were threatened with legal action. Now we have a situation where the government is instructing schools to reduce the amount of teaching time available.

“If we’d had the freedom to take action before the holidays, we might have been in a position to have more schools open for more pupils. School leaders will be baffled, frustrated and justifiably angry tonight.”

Schools were struggling to remain Covid-safe during the autumn term, despite the intense efforts of teachers and staff, with huge numbers of pupils contracting the virus and then being sent home.

All primary schools had been due to fully reopen on 4 January, along with secondary schools opening for vulnerable children and those sitting exams this year (Years 11 and 13).

Effectively, the whole process has been shunted back a week. This is two weeks after the usual start of term.

How are the other UK nations returning to school?

Schools in all the UK nations are remaining open for vulnerable children. England, Wales and Scotland have also committed to maintaining face-to-face teaching for children of key workers.

Do you work in a school? Will you be affected by mass testing in schools? Email haveyoursay@bbc.co.uk.