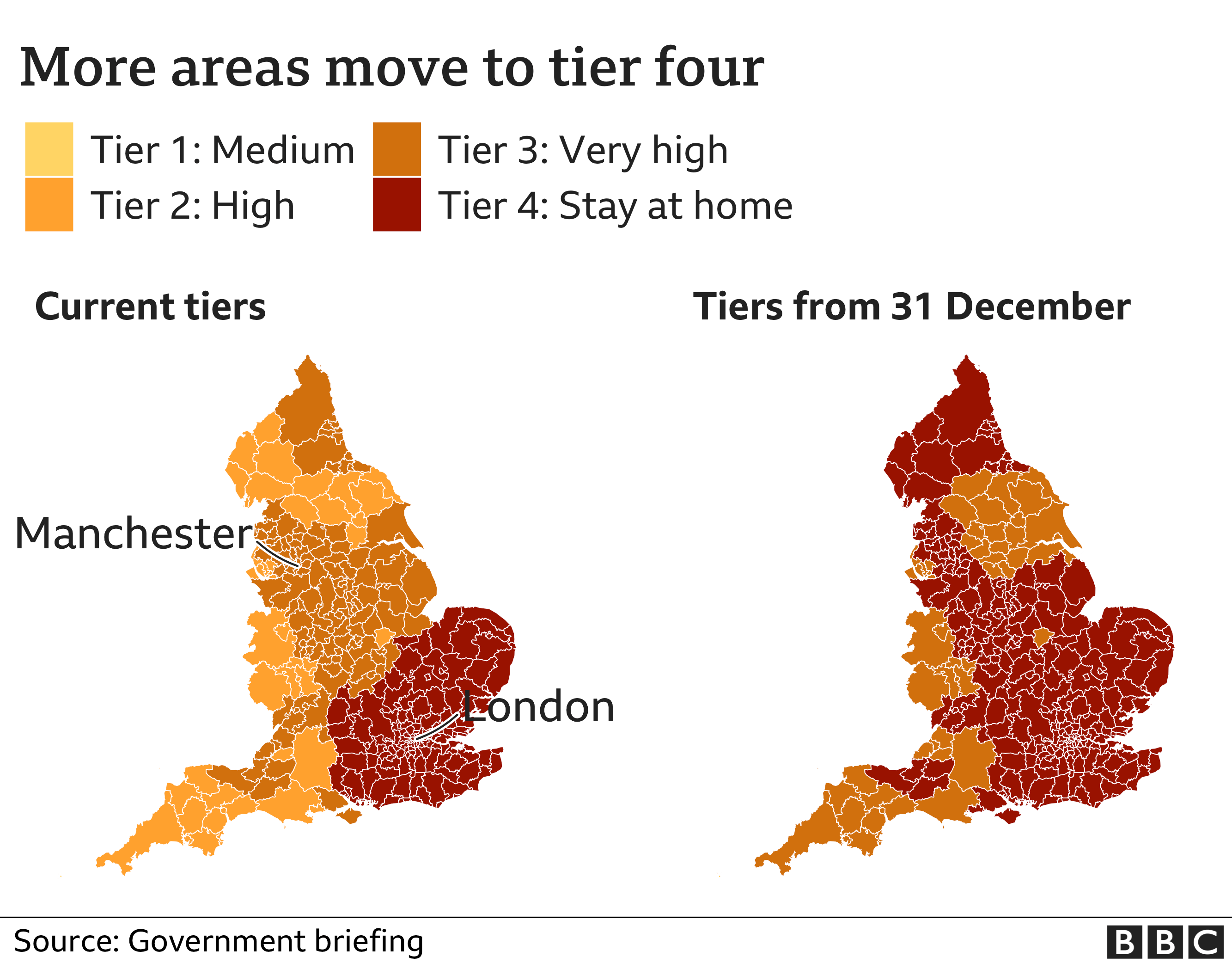 It is vital parties do not take place and that people stick to the rules, NHS England’s Prof Stephen Powis said.

Some 20 million more people in England have been told to “stay at home” after tier four was expanded at midnight.

They join 24 million who were already living in England’s top tier, which prohibits indoor household mixing.

Meanwhile, many parents in England are attempting to determine whether their children will return to school when the new term, due to begin for most pupils on Monday, gets under way.

Local authorities said they were still working through the details after Education Secretary Gavin Williamson announced in the Commons on Wednesday that around a million primary pupils in at-risk areas will not return to school next week.

The staggered reopening of secondary schools has also been delayed until 11 January for exam-year pupils and 18 January for other year groups.

Mr Williamson described the changes as an “immediate adjustment” to previous plans – vulnerable and key worker children are not affected.

It came as the UK recorded a further 50,023 new Covid cases on Wednesday, as well as 981 more deaths within 28 days of a positive test – more than double Tuesday’s total.

Prof Powis, NHS England medical director in England, called on people to show restraint when seeing in the new year.

“We know it’s the end of the year, it’s a time where people traditionally want to celebrate,” he said.

“But it’s absolutely vital that this year, everybody continues to follow the guidance by staying at home and not mixing.”

Prof Powis added: “We can all play a part in fighting this terrible virus: stay at home, mark the new year with just nearest and dearest within the rules.

“This action will reduce infections, relieve pressures on hospitals, and that’s how everybody can help to save a life.

“Covid loves a crowd, so please leave the parties for later in the year.”

“That means not meeting up with friends or family indoors, unless they’re in the same household or support bubble, and avoiding large gatherings of any kind,” he told a Downing Street press briefing.

The Metropolitan Police issued a warning to potential revellers in London to “celebrate the new year in the comfort of their own homes, not the homes of family and friends”.

While the changes to England tier system came into force at 00:01 GMT on Thursday, Wales and Northern Ireland remain in strict lockdown.

In Scotland, First Minister Nicola Sturgeon has already warned people not to celebrate Hogmanay in the traditional way amid a lockdown across the mainland.

The U-turn on reopening primary schools in some areas of England came amid rising infection rates and the fast spread of the new virus variant, Mr Williamson said.

Shadow further education and universities minister Emma Hardy said it was a “shambles” that full details had not been provided as the announcement was made.

A list of 50 areas where primary schools are subject to delayed reopening was later published by the government on its website.

But some London council leaders said the plans lacked logic as some areas of London were inexplicably left out despite having higher case numbers.

A further plan for the reopening of secondary schools is still to be confirmed but the government said “all students” would return to face-to-face education “in the third week of term”.

Among the areas joining tier four are Lancashire, Birmingham and Black Country, Cumbria and the Isle of Wight.

Liverpool City Region, Herefordshire, Cornwall, Dorset and Wiltshire are among those now in tier three.

Alongside the changes to England’s tier system, Wednesday also saw the approval of the Oxford coronavirus vaccine – of which the UK has ordered 100 million doses – with vaccination centres now starting to invite patients to receive the first of their two doses from next week.

Priority groups for immunisation have already been identified, starting with care home residents, the over-80s, and health and care workers.

Health Secretary Matt Hancock told the Commons the UK already has 530,000 doses available from Monday, “with millions due from AstraZeneca by the beginning of February”.

He added that the “clinical advice is that the Oxford vaccine is best deployed as two doses up to 12 weeks apart”.

More than 600,000 people in the UK have been given the Pfizer-BioNTech jab since Margaret Keenan became the first person in the world to be given a Covid vaccine outside a clinical trial.

It is hoped that about two million patients a week could soon be vaccinated with the two jabs that have now been approved.

Prof Jonathan Van-Tam – the deputy chief medical officer for England – said that both Pfizer and AstraZeneca were currently testing to see if their vaccines worked against the new Covid-19 variant.

However, it could be 12 to 14 days before either company can give a “solid steer”, he added.

Do you live in an area where the tier has been changed? How will this impact you? You can share your experience by emailing haveyoursay@bbc.co.uk.