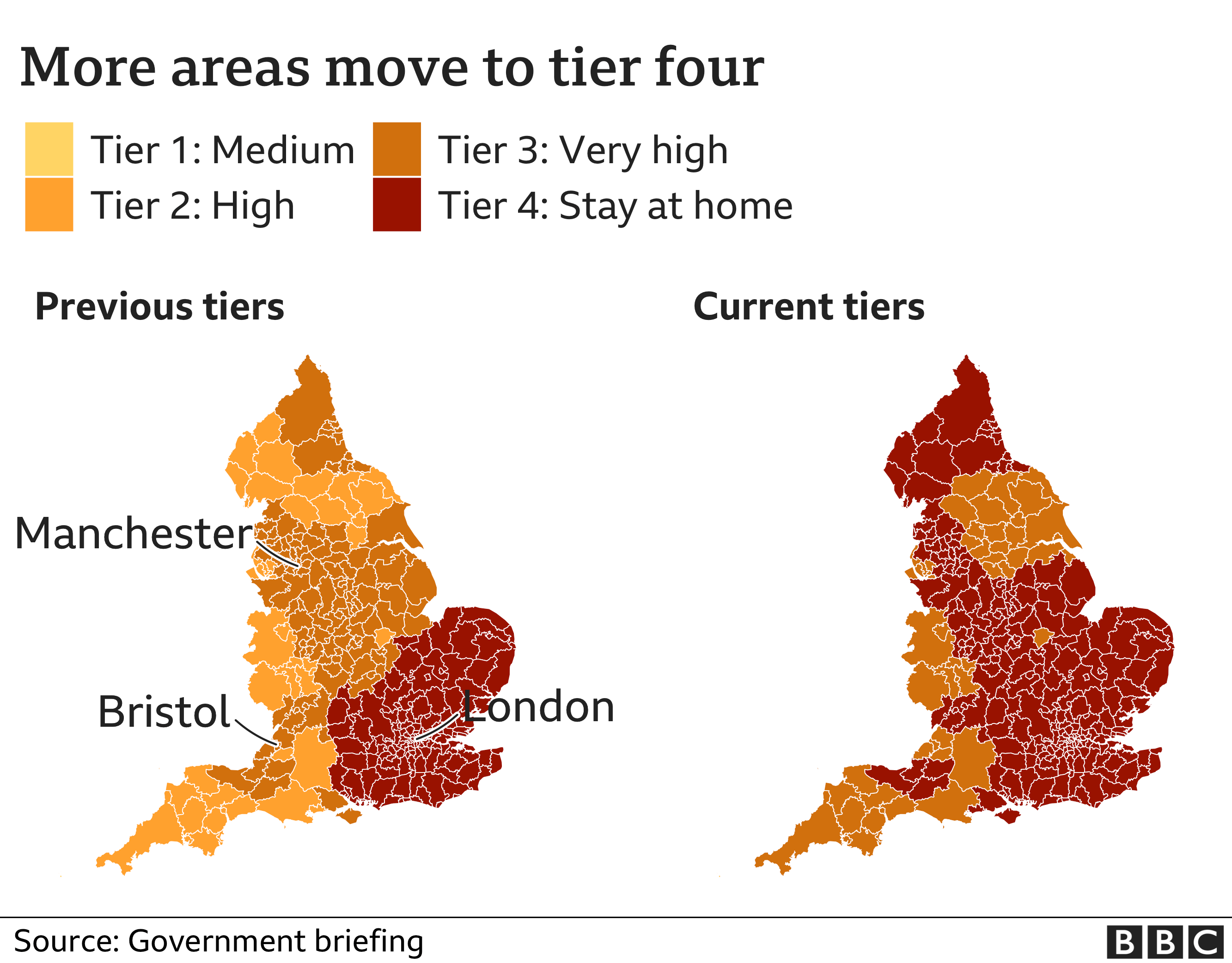 Publishedduration55 minutes agoPeople should take “personal responsibility” and stay at home this New Year’s Eve to avoid spreading Covid-19, the health secretary says. With the NHS under increasing pressure, Matt Hancock said “we cannot let up”. It comes as around 20 million more people in England entered the toughest level of restrictions at midnight. They…

With the NHS under increasing pressure, Matt Hancock said “we cannot let up”.

It comes as around 20 million more people in England entered the toughest level of restrictions at midnight.

They join 24 million who were already living under tier four rules, which include a “stay at home” order and the closure of non-essential shops.

In tier four areas, people are not allowed to mix with other households indoors or in most outdoor venues, although an individual can meet one other person in an open public space.

Different households are also prohibited from mixing indoors in tiers two and three. The Isles of Scilly is the only area currently in tier one, where groups of up to six people are allowed to mix indoors and outdoors.

The UK reported 55,892 new Covid cases on Thursday – the highest daily number of cases recorded yet. However, the infection rate during the first peak in spring is thought to have been higher than official figures suggested as testing was much more limited then.

A further 964 deaths within 28 days of a positive test have also been recorded.

Meanwhile, the start of the new school term in England has been delayed amid concerns about a fast-spreading new variant.

Education Secretary Gavin Williamson said he wanted school closures to be as “short as possible”, after he announced primary pupils in the most at-risk areas of England will not return as planned on Monday.

Secondary schools will also remain closed for an extra two weeks for most pupils, although Years 11 and 13 will return on 11 January.

A government advertising campaign to “See in the new year safely at home” is running throughout Thursday, urging people not to meet up with friends or family indoors, unless they are in the same household or bubble, and to avoid large gatherings.

The adverts remind the public that about one in three people who have Covid-19 have no symptoms, so people should act like they have the virus to avoid spreading it without realising.

Mr Hancock said: “With our NHS under pressure we must all take personal responsibility this New Year’s Eve and stay at home.

“I know how much we have all sacrificed this year and we cannot let up. Over 600,000 people have now been vaccinated and we are close to beating this virus.

“Now more than ever, we need to pull together to save lives and protect our NHS. If we continue to do our bit by staying at home, we can get through this together.”

The Metropolitan Police issued a warning to potential revellers in London to “celebrate the new year in the comfort of their own homes, not the homes of family and friends”.

Commander Paul Brogden, who is leading this year’s operation, said fines would be issued where necessary to any rule-breakers.

In Brighton, people have been told not to attend a New Year’s Eve party on the seafront, after a group called Protest Everywhere advertised a “freedom protest street party”.

Sussex Police said it would intervene to enforce restrictions on gatherings.

While the changes to England’s tier system came into force at 00:01 GMT on Thursday, Wales and Northern Ireland remain in strict lockdown.

The Welsh Ambulance Service warned “no party is worth the risk”, with the health service under “extreme pressure”.

In Scotland, First Minister Nicola Sturgeon has urged people not to celebrate Hogmanay in the traditional way amid a lockdown across the mainland.

The streets of Edinburgh will be empty for the first time in recent memory following the cancellation of its world famous street party, with only online events planned.

On Wednesday, Prof Stephen Powis, NHS England’s national medical director, said it was “vital” people followed the guidance by staying at home and not mixing with other households.

“Covid loves a crowd, so please leave the parties for later in the year,” he told a Downing Street press conference.

“That means not meeting up with friends or family indoors, unless they’re in the same household or support bubble, and avoiding large gatherings of any kind,” he said.

Among the areas joining tier four are Lancashire, Birmingham and Black Country, Cumbria and the Isle of Wight.

Liverpool City Region, Herefordshire, Cornwall, Dorset and Wiltshire are among those now in tier three.

Alongside the changes to England’s tier system, Wednesday also saw the approval of the Oxford-AstraZeneca coronavirus vaccine, with vaccination centres starting to invite patients to receive the first of their two doses from next week.

Do you live in an area where the tier has been changed? How will this impact you? You can share your experience by emailing haveyoursay@bbc.co.uk.