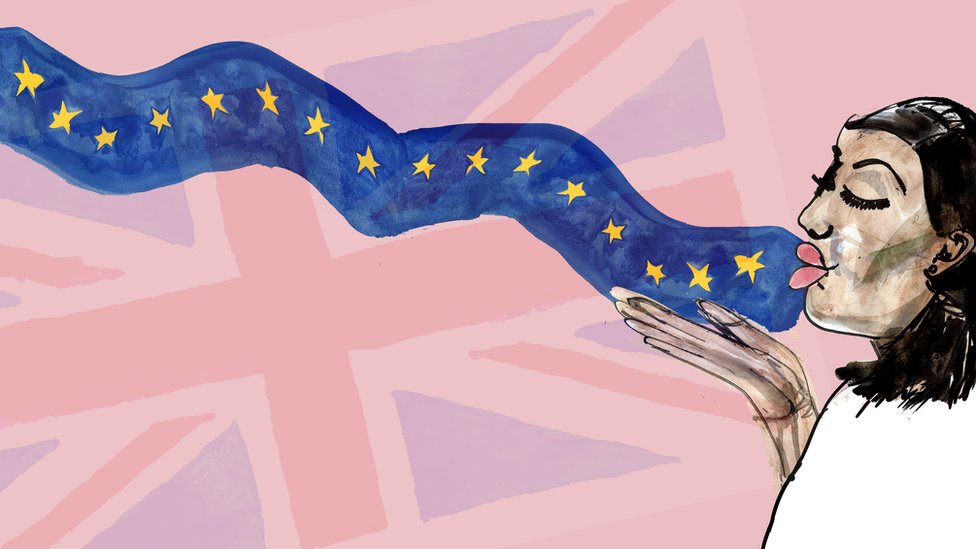 By Ashitha NageshBBC NewsPublishedduration6 hours agoAfter a 47-year relationship, the split between the EU and the UK becomes real on 1 January 2021. The phase where we negotiated while things stayed the same is about to come to an end. Whether you supported Leave or Remain, whether it feels like you have regained or just…

After a 47-year relationship, the split between the EU and the UK becomes real on 1 January 2021. The phase where we negotiated while things stayed the same is about to come to an end.

Whether you supported Leave or Remain, whether it feels like you have regained or just lost your identity – couples therapists have some advice on coping.

For Andrea Balboni, a couples therapist at Zoe Clews and Associates in London, it is like one of those divorces where one child is relieved by the split, while the other felt it was so much better when we were all together.

“It feels like the UK population is now split like that… But we’re still siblings, so we’re going to be in the same family forever. With families, it’s important to be able to communicate.”

“This is just like a difficult divorce where the couple still have shared parenting for the future. They have a choice to make the relationship cordial… or they can be hostile and conduct covert warfare and damage the futures of the children they love,” says Neil Wilkie, a couples therapist and founder of an online relationships platform.

Dealing with… a break-up you never wanted

For some Remainers, therapists have compared the process of leaving the EU to the emotional stages of loss – beginning with denial, and then anger, sadness, bargaining, until finally they reach acceptance.

It’s a process many Remainers may experience even now, four years on from the referendum vote as the transition period ends.

“Burying your head in the sand, hoping it’s not true,” says Mr Wilkie. “That’s an instinctive response to hearing something you don’t like.”

Some people hoped that, despite the vote, Brexit could be cancelled.

“It’s about still being stuck in it emotionally, even though the relationship is over,” psychotherapist and author Hilda Burke says. It’s natural, but the key is to be aware of your feelings and just be kind to yourself, she adds.

Anger is definitely an issue for many – and there has been a lot of it over politics in the last four years, notes Mr Wilkie, who warns anger can resurface and potentially go on for many years.

And while the experts agree that it can be cathartic to express those feelings, it’s also unlikely to resolve your issues with the other side.

That doesn’t mean these aren’t real concerns, from existential confusion over your own identity to concerns about impending restrictions and the real economic uncertainties.

So how do you cope with it? Ms Burke says it can help to channel anger into something productive, such as learning something new. With Brexit, this could be volunteering for organisations you agree with politically, for example.

“There’s a positive side of anger that doesn’t always get exposure,” she says. “It’s an important part of the healing process.”

Mr Wilkie’s advice for moving past it all – in both Brexit and relationships – is to remember this: “There are things we can’t change, but we can change how we allow it to affect us.”

Dealing with… the tentative hopes of a new beginning

“Brexit was, to the Leavers, like falling in love with someone that they believed was the answer to their dreams,” Mr Wilkie says.

“They passionately believed that [the new set-up] would be so much better than the old relationship.”

But just like a relationship, the new status quo is unlikely to be entirely straightforward or predictable. Some Brexiteers might still be worried about the future, even if they think they did the right thing. That might be a hard thing to admit in such a polarised society.

So how should Leave supporters answer doubts they might even share themselves, but still show support for Brexit? “For those who still believe that Brexit is a good idea, tell others that this is a journey, and that 31 Dec 2020 is only the start, it is not the destination,” says Mr Wilkie.

Those Leavers who don’t have any doubts at all may struggle to understand why, four years on, some people still fail to appreciate their optimism. What do you do when faced with this? “Know that even if many disagree, you have a right to your opinion, to how you interpret the information at hand, to how you feel about things, and ultimately to what you consider the best way forward for everyone,” counsels Andrea Balboni.

Dealing with… divisions when you just can’t agree

Disagreeing with each other is fine – we just need to keep these disagreements respectful.

According to Ms Balboni, one of the most common pitfalls for couples – as well as friends and family – is assuming they know how the other person feels.

“When you’re counselling couples, a lot of the time people will talk over one another, or they’ll hear what they think the other person is thinking,” she says.

Instead, people should make sure they “hear each other and acknowledge the other person’s position” respectfully, she says, by taking turns to share opinions.

The goal, she adds, shouldn’t be to convince the other person to change their mind. Instead, you should just try to understand each other.

“The other side then says, ‘what I heard was…’ and repeats back your position,” Ms Balboni says.

“What you really want is that mutual understanding – so that even if it’s an ‘agree to disagree’ situation, everyone feels heard, acknowledged and understood.”

Some 3.6 million people currently living in the UK were born elsewhere in the EU – about 5.5% of the country’s population.

After the EU referendum in 2016, many EU citizens said that after building their lives here and making the UK their home, they felt rejected.

With our departure from the EU in its final stage, and many Leave voters celebrating, it’s possible that these feelings of rejection could resurface. But, Ms Burke says, it’s important not to tie this feeling to your sense of self-worth.

“With any rejection, we take things really personally and think it’s about us – but usually it’s not,” Ms Burke says.

“We give ourselves a bigger role than we actually played in that person’s decision, whether that’s Brexit or a break-up.”