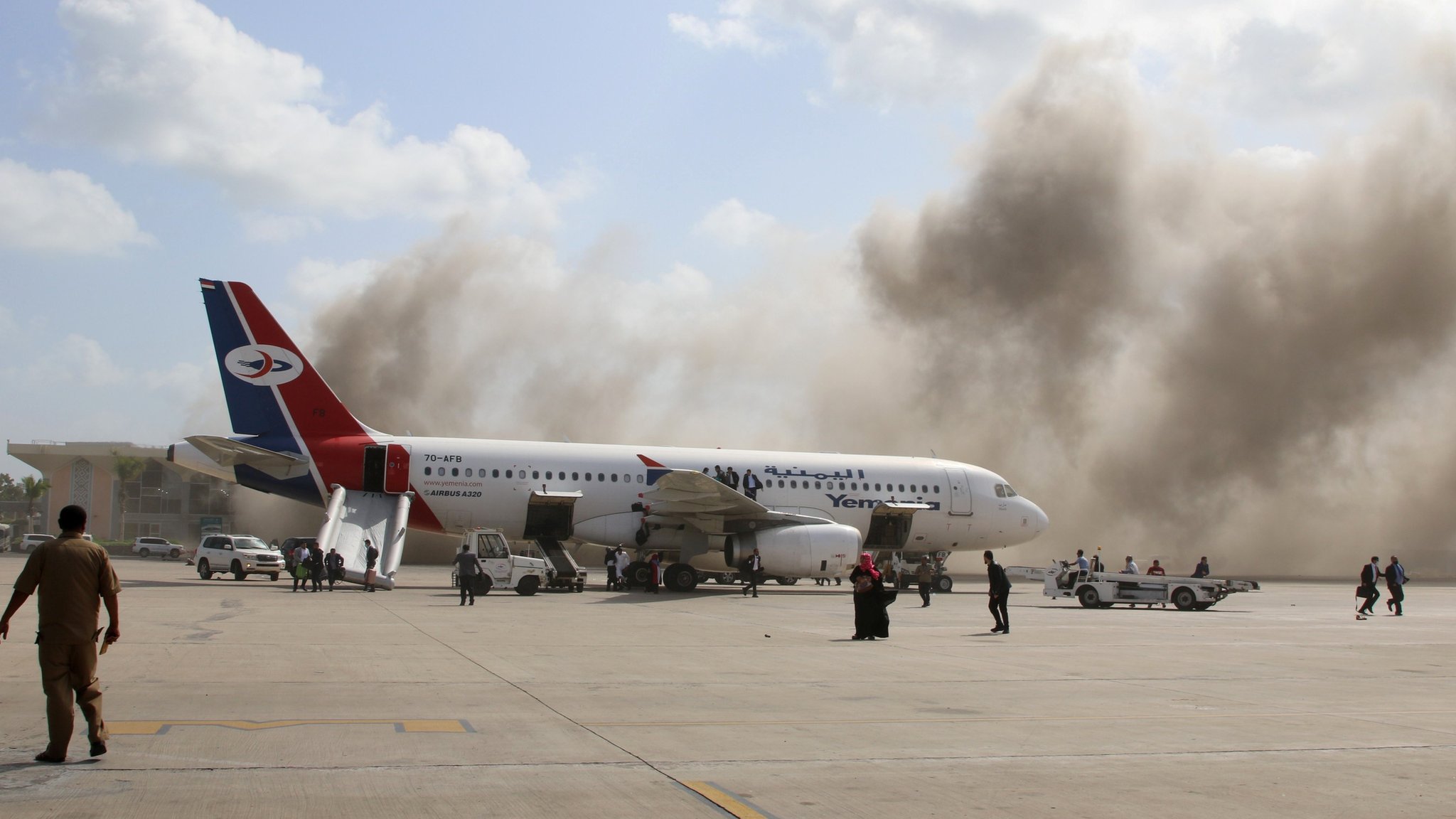 Publishedduration1 hour agomedia captionVideo shows the moment the Aden airport is attackedAt least 13 people have been killed in an attack at the airport in Yemen’s second city of Aden as the new government arrived from Saudi Arabia, security sources and medics say.There was at least one explosion as ministers were preparing to disembark.Prime Minister…

At least 13 people have been killed in an attack at the airport in Yemen’s second city of Aden as the new government arrived from Saudi Arabia, security sources and medics say.

There was at least one explosion as ministers were preparing to disembark.

Prime Minister Maeen Abdulmalik Saeed said he and his cabinet were “fine”.

Information Minister Moammer al-Eryani accused the rebel Houthi movement of carrying out what he called a “cowardly terrorist act”.

We assure our ppl that all cabinet members r safe, &cowardly terrorist attack by Iran-backed Houthi militia on Aden airport will not deter us fm our duty & our life isn’t more valuable than other Yemenis.
May Allah have mercy on souls of martyrs, &wish fast recovery 4injured

Yemen has been devastated by a conflict that escalated in 2015, when a Saudi-led coalition of Arab states launched a military operation to defeat the Houthis and restore President Abdrabbuh Mansour Hadi’s rule.

The fighting has reportedly left more than 110,000 people dead; triggered the world’s worst humanitarian disaster, with millions on the brink of famine; and left the country even more vulnerable to the Covid-19 pandemic.

Video footage of Wednesday’s incident showed that there was a large blast as passengers began leaving the plane that had flown the new cabinet to Aden.

A crowd that had gathered on the tarmac to welcome the ministers fled as thick smoke billowed from the airport terminal. The sound of gunfire was heard soon afterwards.

The cause was not clear, but a security source told Reuters news agency that three mortar shells landed on the terminal.

Later, Mr Saeed tweeted: “We and the members of the government are in the temporary capital of Aden and everyone is fine.

“The cowardly terrorist act that targeted Aden airport is part of the war that is being waged against the Yemeni state and its great people,” he added, without directly blaming the Houthis.

“It only increases our determination to carry out our duties.”

“I wish the cabinet strength in facing the difficult tasks ahead,” he said in a statement. “This unacceptable act of violence is a tragic reminder of the importance of bringing Yemen urgently back on the path towards peace.”

Mr Saeed’s new cabinet was formed in an effort to heal a long-running rift between Saudi-backed government forces and militias loyal to the separatist Southern Transitional Council (STC), which are supported by the United Arab Emirates.

The two sides are supposed to be allies in the civil war against the Houthi movement, which controls the capital Sanaa and much of north-western Yemen.

But in the past two years a power struggle has triggered several rounds of fierce infighting.

In August 2019, the STC seized control of Aden and refused to allow the cabinet to return to its temporary home until Saudi Arabia brokered a power-sharing deal that November.

The agreement was never implemented and there were fresh clashes this April, when the STC declared self-rule in southern Yemen.

The separatists rescinded their declaration three months later and agreed to revive the power-sharing deal after receiving a commitment that there would be equal representation for northerners and southerners in the 24-member cabinet. The two sides also agreed on the separation of forces inside Aden.