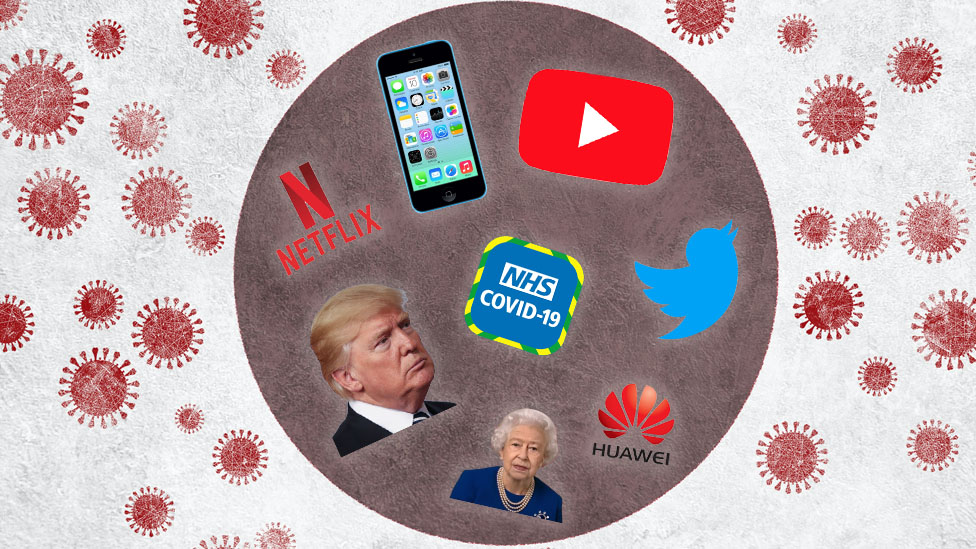 By Leo KelionTechnology desk editorPublishedduration1 day agoimage copyrightPA/Getty/Channel 4It’s fair to say 2020 will not be remembered fondly. The coronavirus pandemic dominated tech – like all else – with many of us spending more time than ever in front of screens. “You’re on mute,” became a catchphrase, and during lockdowns people even began dating via…

It’s fair to say 2020 will not be remembered fondly.

The coronavirus pandemic dominated tech – like all else – with many of us spending more time than ever in front of screens.

“You’re on mute,” became a catchphrase, and during lockdowns people even began dating via video chat – but despite the internet helping keep us in touch, many still felt very alone.

Some of the biggest tech companies saw their profits soar, and a few lucky-placed start-ups such as Zoom and Deliveroo also benefitted. But many smaller companies came under strain, and – rightly or wrongly – Netflix rival Quibi blamed the pandemic for its implosion.

Meanwhile ransomware attacks continued to rise; lots of high-profile Twitter accounts were hacked; and the SolarWinds hack provided a late shock when it emerged that Russia might have compromised much of the US government’s IT systems.

Other landmark moments included the launch of new games consoles; major antitrust cases against Big Tech; and Apple going to battle against both Fortnite and Facebook.

Yet none of those stories made our annual list of the year, based on which tech desk story was most read each month. Here’s what kept you occupied – and what happened next:

Calls by European politicians for a universal charging method led to speculation that Apple might ditch its Lightning connector cable. Rumours persisted for months that the iPhone 12 range would move to USB-C to match the firm’s laptops. But the handsets held onto the eight-year-old port, although their iPad Air stablemate did make the switch. In any case, with wi-fi 6 and the firm’s MagSafe accessories meaning data transfers and charging can be done “wirelessly” faster than before, the hot money is that Apple might simply do away with ports on its handsets altogether.

February: Slowly does it

Apple’s sales are so huge that it would take it less than an hour to recoup the €25m (£22m; $30m) fine imposed by France for deliberately slowing down its older iPhone models. But the point of the penalty was always to embarrass the US tech giant rather than financially wound it. Apple’s defence was that it had taken the step to prolong the life of the handsets and avoid unexpected shutdowns, but the lesson was to be open with the public. Later in the year, the firm agreed to pay out a larger sum to 34 US states to settle their own complaint about the matter. And Apple faces further legal action from the Euroconsumers advocacy group, which is pursuing it for further payouts in Belgium, Spain, Italy and Portugal.

Days after the UK’s first coronavirus lockdown began, it was announced that Netflix would reduce the bitrate of its video streams to avoid putting networks under strain. It had actually been asked by the EU to stop streaming in anything but standard definition, but took this lesser step as a compromise. Disney+, Apple, Amazon and YouTube all followed with similar measures of their own – which have all since been reversed. Most users probably never noticed the dip in picture quality. But the real story of the pandemic was how well networks coped with increased demand – even when later in the year there were record spikes thanks to people downloading games for their new PlayStations and Xboxes, and Amazon streaming the Autumn Nations Cup rugby.

The pandemic has provided fuel to online conspiracy theories and disinformation. One of the leading figures spreading them was the former sports broadcaster David Icke. His appearance in an interview livestreamed on YouTube prompted the Google-owned service to ban all conspiracy videos falsely linking Covid-19 to 5G networks. Other crackdowns on tackling harmful posts about the virus followed on various social media platforms. UK watchdog Ofcom later sanctioned London Live’s TV channel for broadcasting a follow-up interview with Icke in which his claims were “largely unchallenged”. And then Facebook, followed by YouTube and finally Twitter all kicked Icke off their platforms. Some saw this as a victory for common sense, but others worried about the major platforms’ tilt towards more censorship.

It almost seems quaint for it to be newsworthy that Twitter had hidden one of President Trump’s tweets. But the social network set a precedent in May, by labelling a post in which the US leader had written “when the looting starts, the shooting starts” about the National Guard being sent to street protests in Minneapolis. Social media’s handling of the President’s posts has been a source of controversy with Republicans claiming it showed evidence of bias, while Democrat lawmakers suggested the tech firms had not gone far enough. Twitter’s Jack Dorsey and Facebook’s Mark Zuckerberg testified to US lawmakers about the subject multiple times. And while Joe Biden may have won the US election, the threat of removal of some of social media’s legal privileges – Section 230 to those in the know – still looks to be on the cards.

June: Off you Hop

Controversial figure Katie Hopkins was permanently kicked off Twitter’s platform after years of posts many had found to be offensive. The platform didn’t highlight a particular post, but said abuse and hateful conduct had no place on its service. But that wasn’t quite the end of Hopkins’ relationship with the platform. In October, she used her Instagram account to apologise for a past tweet in which she had wrongly claimed police officers had been attacked outside a London mosque, when the incident had in fact occurred streets away. The public mea culpa was issued after the mosque had threatened legal action. Ms Hopkins would have been mindful she had previously lost a costly libel case over tweets about the food writer Jack Monroe.

July: Hanging up on Huawei

The UK’s decision to ban Huawei from future involvement in its 5G network dealt a body blow to the Chinese telecoms giant Huawei. US sanctions had made the company’s future precarious, and gave Boris Johnson’s government the cover it needed to reverse a previous decision to let UK networks use its equipment. Sweden followed with a ban of its own in October, and more recently Germany paved the way for local restrictions with a new law that lets vendors be blocked over security concerns. But that’s not to count the firm out. Earlier this month, China announced plans to install 600,000-plus 5G cell towers in 2021 to boost use of 5G across its major cities, and Huawei is expected to reap many of the orders.

A posh treat turned into payments card nightmare for customer of London’s Ritz hotel. Scammers got hold of a list of people booked into its restaurant and called them to “confirm” their card details. The calls seemed convincing as the perpetrators not only knew when the bookings were for but also managed to spoof the establishment’s real phone number. They then tried to use the blagged card details to make purchases at the retailer Argos. The Ritz said it suspected a data breach at the time. It did not respond to a request for comment about the outcome of its investigation.

The ups and downs of the UK’s coronavirus apps have been one of this year’s biggest running stories. So, the revelation that some police officers had been told not to use England and Wales’ NHS Covid-19 app shortly after its launch drew attention. Within 24 hours of the story’s publication, the National Police Chiefs’ Council issued new guidance saying staff could use it on their personal phones after all. Despite its rocky beginnings, the app has been a success of sorts having been downloaded more than 20.7 million times to date. But we don’t know how many people have since uninstalled or turned it off, nor how many have ignored its self-isolate orders. It remains an open question whether a privacy-centric approach made these and other apps based on Apple and Google’s design more or less successful than they might otherwise have been.

Towards the end of the year, a “deepfake bot” came to light that was supposedly capable of creating computer-generated nudes based on photos of clothed women submitted via Telegram’s chat app. Except that tests carried out by the BBC found it to be somewhat lacking. “Our results included a photo of a woman with a belly button on her diaphragm,” read our report. Even so, the Italian Data Protection Authority launched an investigation. The case, however, highlighted the potential for this emerging tech to be used as a form of abuse.

While Elon Musk didn’t make this list, Hyperloop – a futuristic pod-based form of travel that he helped develop – did. Virgin Hyperloop’s plan to turn the concept into reality took a step forward when it transported two members of its staff within a stretch of a 0.5km (0.3 mile) vacuum tube, achieving a maximum speed of 172km/h (107mph). Despite the technical achievement, the project still has doubters, who ask how it could ever transport enough passengers to be economically viable. The project’s chief technology officer later acknowledged the criticism but noted: “If you look at the Wright brothers’ plane, that was a single-seater… you’ve got to start somewhere.”

Another deepfake, this time of the Queen, rounded out 2020. Channel 4 created a likeness of Her Majesty wearing a coronavirus-shaped brooch, cracking jokes about her family and showing off TikTok-style dance moves. The four-minute skit prompted more than 200 complaints to the media regulator Ofcom arguing it was in poor taste. But while Deepfakes obviously have the power to scandalise, what they have yet to do is fool people in large numbers. For now, misleadingly-edited videos remain more commonplace and problematic. But at the pace deepfake technology is evolving, it’s possible it will pose a greater threat in 2021 and beyond.