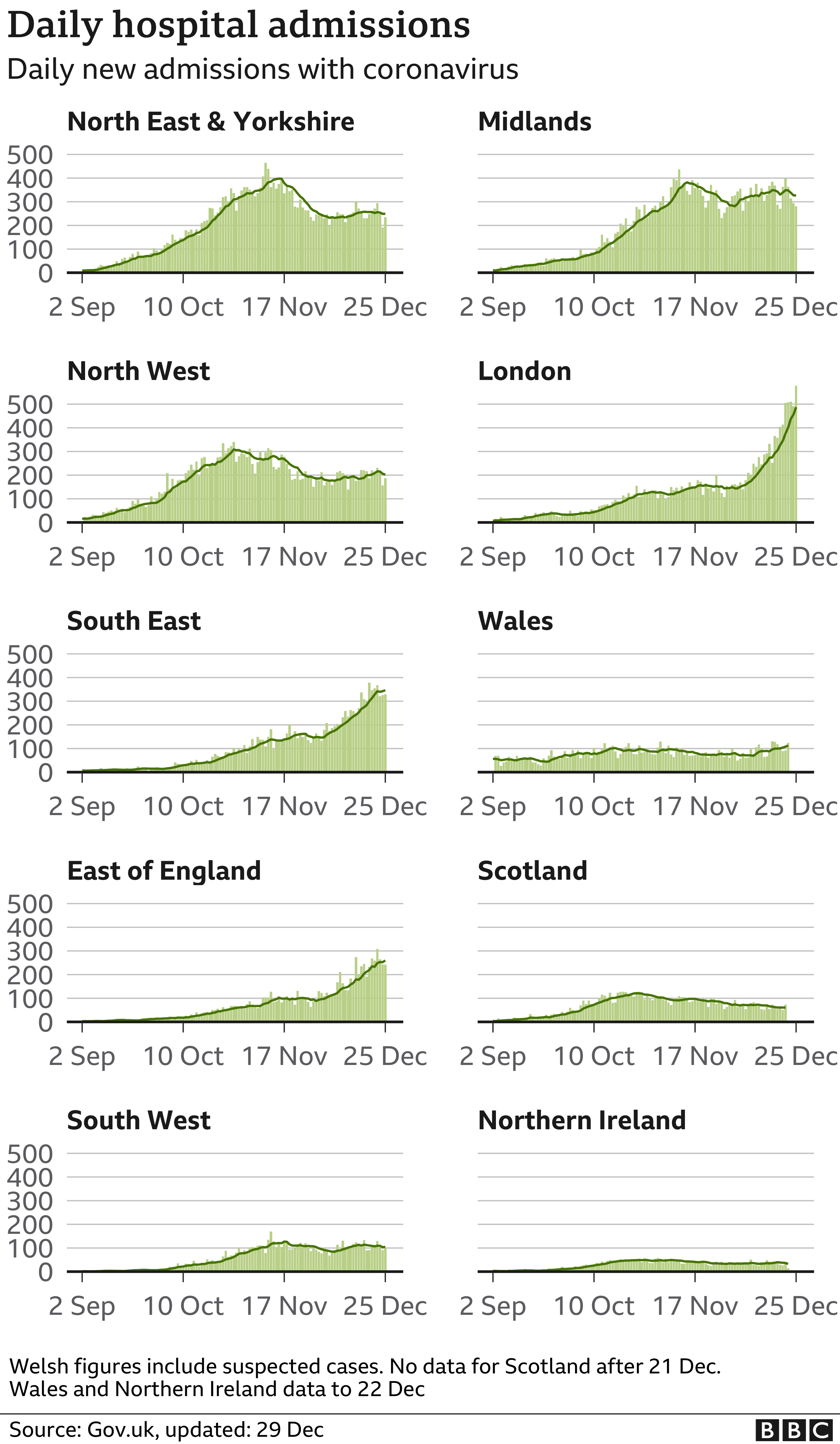 Publishedduration2 minutes agoimage copyrightGetty Imagesimage captionThere has been an increase in patients requiring intensive care in hospitals across London and south-east EnglandMillions more people in England are expected to be placed under tougher coronavirus restrictions amid escalating case numbers.Government sources have indicated an announcement later will see more areas move into tier four – “stay…

Millions more people in England are expected to be placed under tougher coronavirus restrictions amid escalating case numbers.

Health Secretary Matt Hancock is due to detail the changes – which could be introduced within days – in the House of Commons after 14:30 GMT.

The West Midlands and Hartlepool are among the areas that could be affected.

Infection rates in lower tier areas of England have risen rapidly in the last seven days, according to the latest government data.

Parts of the East Midlands, such as Northamptonshire and Leicestershire, as well as all areas of the West Midlands metropolitan county are other areas which could move into tier four.

And it is thought a handful of areas in Lancashire – Blackburn with Darwen, Burnley, Pendle and Ribble Valley – could be upgraded from tier three.

There may also be further curbs for areas already in the highest tier amid concerns tier four rules are not enough to stop the fast-spreading new virus variant.

On Tuesday, 53,135 new Covid cases were recorded in the UK – the highest single day rise since mass testing began – as well as 414 more deaths within 28 days of a positive test.

Around 40% of people in England, including London, parts of the East of England and much of the South East, are currently under tier four rules.

It requires non-essential shops, beauty salons and hairdressers to close, and limit people to meeting in a public outdoor place with their household, or one other person.

Infectious diseases expert Prof Neil Ferguson has said that while “nobody wants to keep schools shut” it may be the only alternative “to having exponentially growing numbers of hospitalisations” – which are now at record levels in England and Wales.

He said that because the new virus variant, initially discovered in Kent, appears to be much more transmissible, it is possible closing schools may not be enough to stop the spread.

Another adviser, Prof Andrew Hayward, said a staggered return to classrooms may be appropriate if schools reopen and that “we’re going to have to have increased, strict restrictions in other areas of society to pay for that”.

Mr Johnson will chair a meeting later to decide whether delaying the reopening of England’s secondary schools until 18 January would bring infection rates down, the Daily Telegraph reported.

His official spokesman earlier said the government was “still planning for a staggered opening” of secondary schools after Christmas but “we obviously keep all measures under constant review”.

Meanwhile, some hospitals in London have begun exploring the transfer of critically ill patients to NHS trusts outside the capital as wards reach capacity, the Health Service Journal reported.

The other two regions, north-east and north-west England, remain below peak levels that were set in mid-November.

In Scotland, First Minister Nicola Sturgeon said it was vital people did not mix indoors with other households, including at Hogmanay, amid level four restrictions across mainland areas.

Police in Wales turned away visitors to the Brecon Beacons, some of whom travelled from as far away as London.

In Northern Ireland, health minister Robin Swann warned of a “significant rise” in Covid cases among younger adults aged 20 to 39.

How have you been affected by the issues in this story? Email haveyoursay@bbc.co.uk.