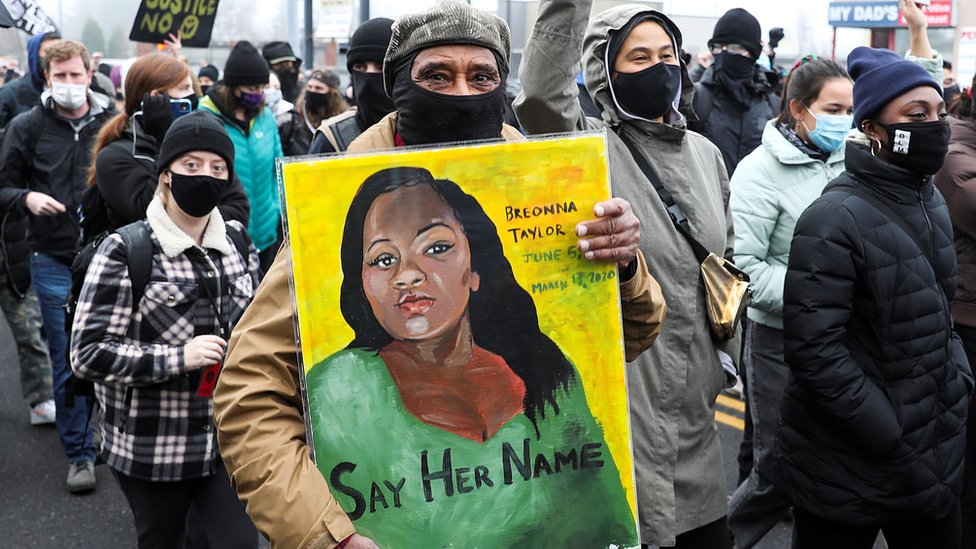 Publishedduration4 hours agoimage copyrightReutersimage captionBreonna Taylor’s killing sparked protests over racial injustice globallyTwo US police officers linked to a notorious raid in which young black medic Breonna Taylor was fatally shot could soon be dismissed from their positions, US media report.The incident in March prompted global outrage as protesters decried another killing of a black…

Two US police officers linked to a notorious raid in which young black medic Breonna Taylor was fatally shot could soon be dismissed from their positions, US media report.

The incident in March prompted global outrage as protesters decried another killing of a black American by police.

One of the officers likely to be dismissed obtained the search warrant for Ms Taylor’s home in Kentucky.

The other fired the shot that killed her, lawyers say.

Ms Taylor, 26, died when police raided her home in connection to a drug case. Ms Taylor’s boyfriend fired at the officers who he said he believed were attackers breaking into their home.

Police say they knocked on the door to announce their presence before breaking down the door with a battering ram.

Ms Taylor’s boyfriend said police did not make their presence known, and he fired out of self-defence. Three officers returned fire with 32 shots, six of which hit Ms Taylor.

Of the police officers present at the raid, one has been sacked so far. Brett Hankison has pleaded not guilty to charges of wanton endangerment for firing three shots into adjoining apartments during the narcotics raid.

In September a grand jury ruled that the three officers should not face homicide charges. One officer, Jonathan Mattingly, who shot Ms Taylor’s boyfriend in the leg, later said the case had “nothing do with race”.

In the latest development, two officers received letters this week from Louisville police department that indicate they will soon be removed from their positions, according to the New York Times.

Officer Joshua Jaynes was told that an investigation by the department found he had lied when preparing the paperwork to obtain permission to conduct the search of Ms Taylor’s home, reported US media.

The letter also said he did not plan the raid appropriately.

“Because the operations plan was not completed properly, a very dangerous situation was created for all parties involved,” it said, according to CBS news.

A lawyer representing Mr Jaynes told CBS that the officer had not created the plan himself and that senior colleagues were present when the warrant was signed off.

Mr Jaynes will be allowed to defend himself against the claims on Thursday, CBS says.

Black Lives Matter activists in the US have demanded that Louisville police take stronger action against the officers in the case and say that police too often escape unpunished after killing members of the public.

Racial injustice and inequality in the US was again thrust under the spotlight in 2020 following Ms Taylor’s death and the killing of unarmed black man George Floyd in May.

But the issue remains divisive. On Tuesday a statue of Ms Taylor erected in Oakland, California, was found smashed just two weeks after it was installed.