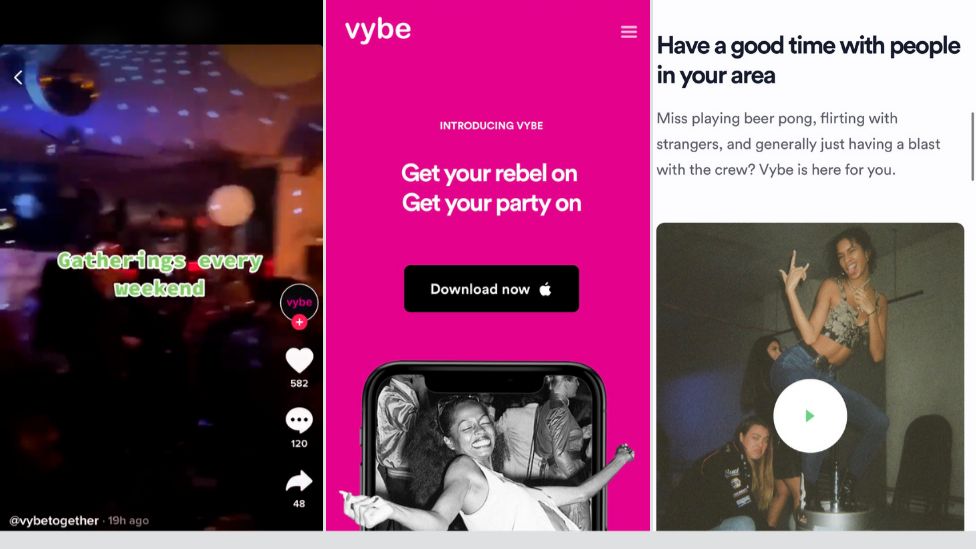 Publishedduration5 hours agoimage copyrightVybeTogether/TikTok/TaylorLorenzimage captionVybe Together promoted parties every weekendAn American app that promoted private parties during the coronavirus pandemic has been removed from the Apple App Store.Vybe Together calls itself a “private community to find, join and host parties.”A recent video on its TikTok account claimed it held secret parties every weekend.Although its account…

An American app that promoted private parties during the coronavirus pandemic has been removed from the Apple App Store.

Vybe Together calls itself a “private community to find, join and host parties.”

A recent video on its TikTok account claimed it held secret parties every weekend.

Although its account on the platform, as well as its own website, has been taken down, the company vows to return.

Users of the app had to submit a profile for approval, including their Instagram handle, as well as photos of them “partying,” The Verge reported.

Once activated, users could apply to join parties and their attendance would be approved by organisers.

Successful candidates would be sent an address just two hours before the event.

Even if this app was meant to find and promote small indoor parties (as they claim, despite the posts on TikTok), that’s still incredibly dangerous and illegal in many places under current US pandemic restrictions. I hope everyone out there can stay safe and healthy and take care

The video showed people dancing inside a venue, and it advertised a New Year’s Eve party in New York.

But in New York state, indoor and outdoor gatherings are limited to 10 people, and bars and restaurants are closed indoors in New York City.

TikTok told the BBC the account was removed for violating its community guidelines. The account had only 139 followers and three videos.

Vybe Together has not responded to a request for comment.

However, a page on its now-removed website said: “We are aware that Covid is a major health problem… having large scale parties is very dangerous. That is why we don’t support that.”

“But Vybe is a compromise, no big parties but small gatherings. We could be living, at least a little during these times with Vybe.”