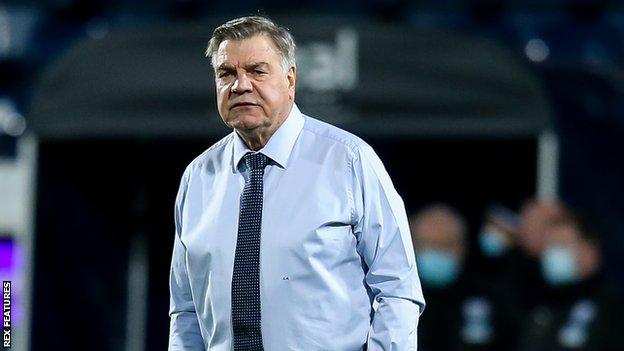 West Brom boss Sam Allardyce says football needs a break after the Premier League returned its highest number of positive coronavirus results in a single round of tests this season.

On Tuesday, the latest round of Premier League testing found 18 people had the virus.

New coronavirus cases at Fulham mean their Premier League match at Tottenham on Wednesday is in doubt.

“I’m very concerned for myself and football in general,” Allardyce said.

Sheffield United have confirmed they had “numerous positive tests” in the latest round of testing.

On Monday, Manchester City’s Premier League match at Everton was postponed four hours before kick-off because of a coronavirus outbreak.

Allardyce said a “circuit break” was the “right thing” to do to cope with the outbreak.

“Everyone’s safety is more important than anything else,” he added after West Brom’s 5-0 home defeat by Leeds on Tuesday.

“When I listen to the news that the variant virus transmits quicker than the original virus, we can only do the right thing, which is have a circuit break.

“I am 66 years old and the last thing I want to do is catch Covid.

“As much as we’re getting tested – we had one positive this week – it seems to be creeping round. No matter how hard we try, no matter how many times we get tested, how we wear our masks, how we sanitise our hands, we’re still catching a lot infections round the country.

“If that helps [circuit breaker], let’s do it and let the season run a little longer when we get through it.”

In the EFL, coronavirus outbreaks at clubs led to seven of Tuesday’s 12 scheduled League One games being postponed.

The league, which until now has carried out targeted testing, will conduct coronavirus tests with all 72 of its clubs in the week commencing 4 January.

“I can’t come on 100%, but what I know is that certain clubs are doing things slightly wrong,” he continued.

“I think there’s some clubs using gyms inside with too many players. If we want our game to carry on, which in my view I think it should, I think we have to get back to how we were when football first returned.”

Southampton boss Ralph Hasenhuttl operated from home via a video link for his side’s goalless draw with West Ham on Tuesday after a member of his household tested positive for coronavirus.

In League Two, a coronavirus outbreak at Morecambe has caused two of their games – at Bolton Wanderers and Bradford – to be postponed.

Wolves boss Nuno Espirito Santo also reacted to the latest round of Premier League testing figures after his side’s 1-0 defeat at Manchester United on Tuesday.

“The rising of the cases is increasing massively over the country and we are not an exception,” the Portuguese said.

“Some things are impossible to avoid. If there’s a break coming, then people have to sit down and see if it’s for the better.”

Analysis – ‘It appears the game is approaching a crossroads’

It might be easy to view Allardyce’s comments as being a diversionary tactic after a particularly bad night for his new team but the idea of a circuit break is being spoken about.

The Premier League itself is not raising it – but those running clubs are talking about it.

But whichever way they turn, the route is fraught with problems.

If football stopped now, who is to say when the situation will be better? If this is not the worst point, what is the point, especially when the government is not asking for it?

And, as Ole Gunnar Solskjaer pointed out when I asked the Manchester United manager what he thought about it after their victory over Wolves, when would the games get played?

Logistically, there is no scope for the season to be put back without the European Championship scheduled for June being moved – and that is highly unlikely to happen.

Then there is the potential rebate for TV companies – which clubs are going to vote for that?

But, if the league ploughs on regardless, what happens if a club like Manchester City fall behind in their fixtures, as Accrington Stanley have done in League One? If clubs end up playing four games in a week, where is the fairness in that?

Can the Premier League simply ignore a situation society is struggling with or can it operate in a bubble?

And the biggest problem – what happens next week when Football League clubs are all tested before the FA Cup third round?

Once again, it appears the game is approaching a crossroads. The unpalatable truth is that whichever route it takes, it might end up being the wrong one.